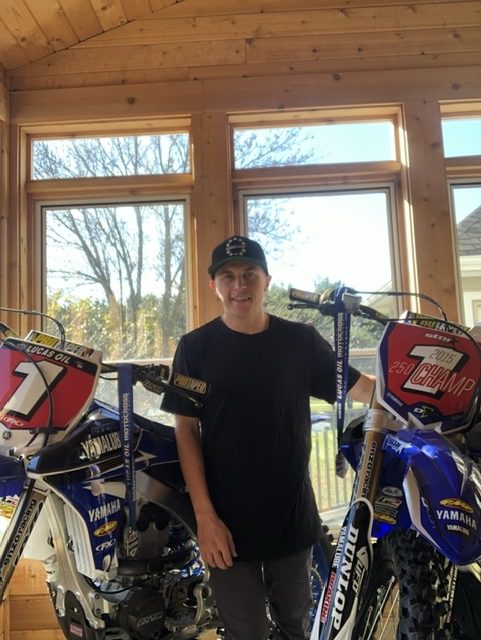 Yamaha announced today that two-time 250 National Champion Jeremy Martin would return to the powerful Monster Energy/Star Racing/Yamaha team for the 2021 Monster Energy Supercross and Lucas Oil 250 MX Championships. Martin, who earned consecutive championships with the team in 2014 and 2015, is excited about lining up aboard a YZ250F again and hopes to earn his third title in blue. Martin’s 2020 season was nothing short of miraculous, as he returned to action after missing nearly two complete seasons due to a broken back suffered at the Tennesee National in 2018. Martin not only returned to top form, but he also contended for the 250 National Championship until the final moto of the season, which he won. We caught up with JMart to get his thoughts on his new contract and the opportunity it brings.

After your second moto at Fox Raceway, you said that you’d pound the pavement Monday and look for a new job. Seems like things happened pretty quickly!
Yeah. Obviously, I got wind of the GEICO Honda team going away, as I think it was pretty well known that they might not be around for next year. So I was doing some behind-the-scenes stuff as I was trying to win the championship as far as making some calls and seeing if there were opportunities with some 250 teams for next year. I sat down and had a meeting with Star Yamaha right before the Fox National. Things got really serious on Sunday after the race. And next thing you know, I signed a contract basically Monday, and here we are.

Wow. That’s pretty crazy that you’re returning to the team that you won two national championships on. It’s almost like the whole cycle of fashions coming back around…
Yeah. (Laughs) It’s definitely crazy. You probably think since I did win two championships with them, I would have graduated to the 450 Class by now, but obviously, with the back injury and how things have unfolded,  it hasn’t happened yet. So it’s pretty cool to be able to get back on the Yamaha. I actually have two championship bikes from ’14 and ’15 sitting at my house, and I walk by them every day. It’s going to be pretty cool to get back on that bike for next year and basically try to pick up where I left off on that thing.

Okay. So having raced one of the Star Yamahas previously, you know about the power and the capabilities of the bike. Was it ever frustrating racing against them when you were not on the team?
Yeah. There’s no doubt that you see a lot of blue bikes up at the front on the start. And I knew that when I left, I knew that there might be a slight difference in horsepower. Let’s just say that I’m excited to be back!

Okay. So it was an 11th-hour deal then. You didn’t sign it till after the series was over. That’s pretty crazy that it came down to that, and it turned out so well. A lot of times when guys sign deals at the last minute, they’re kind of desperation deals.
Yeah. For sure, it was just definitely, like I said, an 11th-hour deal. And I was very fortunate that I even had the opportunity to be a part of the team. The team is definitely pretty full. I think they had four guys already, just contracted for next year on the professional side. And then they have a big roster of amateurs that are coming up right now. And then they just took over the 450 team as well. So honestly, I was really lucky to be given a contract and to be a part of it for next year and go back to the bike that I’ve won two championships on. So it’s a big deal.

You have to be super pleased with the 2020 season having sat out multiple seasons with a broken back. You not only returned to racing from what could have been a career-ending injury, you came back and you contended for the title to the very last race…
Yeah, it was cool to be in contention for a championship again. I mean, Supercross, I started out and I was, I would say competitive, but I just didn’t have maybe that edge or that really extra little bit I needed to contend for a championship. And then when I left Salt Lake City, obviously I put my head down pretty hard, and I made up a lot of ground and was able to really give Dylan Ferrandis a really good run at that championship. I feel like this year, obviously, I would have loved to have won it. I’m technically the first loser because I got second. But I felt like at least I made his… If anybody was going to beat me in the championship, at least I made his life a little bit tough and made him go down to the last moto.

Okay, a broken back is one of the most-feared injuries for a motorcycle guy, right? How did you bounce back, physically, and more importantly, mentally?
Just dealing with the broken back, I think, was… I went through stages. When it first happened there in Tennessee, I was just in shock, and I was pretty positive and everything, and I kind of knew something was not right, just the way that, how I felt. And it literally felt like my back was just caved in on itself. And I couldn’t… I was obviously in a lot of pain too. It was the initial shock of… Everybody always was scared of breaking your back, but then when it finally happened, I was like, “Whoa.”
It was a massive reality check of just how dangerous this sport can be. And it took me a long time to… It was definitely a big mental battle. I definitely said to a couple of people, as I was in the recovery process, that I was fine, but now that I’m fully back up to what I used to be, to sit there and say that it didn’t affect me mentally, or I didn’t have some mental stuff to overcome would be a lie. So I was definitely in the trenches as far as from the mental side of things. I was depressed at times, very frustrated at times, especially when I found out that the back hadn’t healed basically six to eight months after the injury.
So that itself, and then realizing, when they opened me up for the third time at the Steadman Clinic in Vail, that I had another infection, and the hospital had missed it. And that’s part of the reason why the back never healed. It was just a long list of things to get back to this road, to be competitive. And I think a lot of the doctors and a lot of the people that were in my circle knew that I had a big road ahead of me, and I could see that they didn’t know if I could come back from it. But I just knew I couldn’t walk away from the sport. I’m not going after everything that I want or at least try to walk away on my terms. And I found a way to work through that stuff and get back and win races.

Checking In With Carson Mumford

Carson Mumford on the SML Show