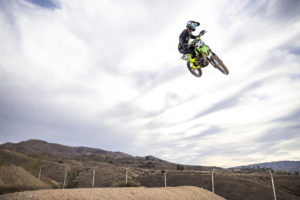 At last, the 2021 Monster Energy Supercross Series kickoff is just a day out. Unfortunately, Covid-19 is yet to be a thing of the past and surely, by now, you know just how different and unique this season is going to be. For this weeks Fox Racing feature, we decided we would give Monster Energy/Pro Circuit/Kawasaki’s Jo Shimoda a call just after he landed in Houston to talk about the upcoming unusual season and what his expectations are for his first race on the green machine. Although racing is yet to start, it seems like a majority of racers don’t mind the thought of this year’s race schedule, and in fact quite a few racers have said they favor it over the traditional weekend-to-weekend, city-to-city schedule. However, Jo Shimoda gave us a different opinion on the schedule during our phone call when he stated, “I just want to race and go home.” All in all, just like all of us, Jo is just excited to be going racing tomorrow night. Scroll down and take a read to see what Jo’s expectations for the Houston rounds are and more. 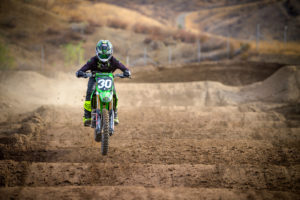 It’s just about an all new program for you this year. Aside from the switch to Pro Circuit Kawasaki, you’re also back with you long-time trainer Yannig Kervella…

Yeah! We’ve been working really hard lately and it’s definitely nice to have him back in my program. I started training with Yannig when I was on 65cc’s, so we have spent a lot of time together. I really trust him and the things that he says, so I’m never doubting my program.

There was a rumor floating around that you were supposed to announce the Monster Energy/Pro Circuit/Kawasaki ride in Japan at a race. Is there any truth to that?

No. Well, not really. I was supposed to do a demo ride day out in Japan for Kawasaki, so maybe that’s what it sprouted from. (Laughs)

Even with how strict restrictions are currently, you were able to go to Florida with the family. How was that?

Yeah! It was cool. It’s been a while since I’ve seen my entire family because of Covid, but it was a really good trip. My dad even came out from Japan. 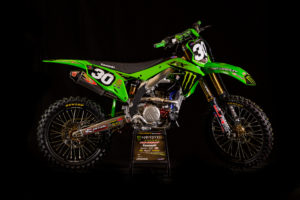 At the time of this phone-call, you just landed in Houston. Is it weird to start the season off in Texas, rather than Anaheim. Or is it not that much of a deal for you, since it’s only your second season…

It’s for sure different, but maybe more-so for other racers. The big thing for me is that I’ve only been on our 2021 bike for maybe two weeks. The little time I have had on the bike is what I’ve been thinking about more than anything.

You’ve touched on it in some of our earlier interviews, but the bike is really good. Right?

Oh yeah! I felt comfortable on it right away. It’s really really fast, so I’ve been enjoying the last few weeks on it. Even with how comfortable I was on it initially, I still feel better and better every time I ride.

Have you seen the Fox gear plan for the 2021 Supercross season? Any kits you’re excited to wear?

I have seen a few of the kits. I think we are just wearing our black and green gear for press day on Friday, basically the kits we wore in our team photoshoot. But I saw some blue stuff that I’ll be wearing soon, which was pretty cool. I think a majority of the kits are mainly black and green this year, to match the bike and everything.

What are your expectations for yourself at the opening round and the following races in Houston?

I want to be on the podium. I think that is where I belong. I’ve felt like I have what it takes to be on the podium, so that is where I expect myself to be. Once I land on the podium, I’ll take the steps forward and build from there. It’s only my second year of my professional career, so I know I still have a lot to learn. I’m sure I will make some mistakes, but I want to fix them and build race by race. My goal is to progress and be strong towards the end of the season. 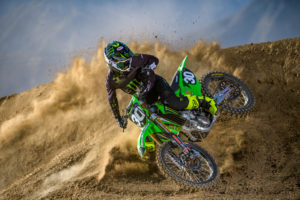 Have the Covid restrictions affected your pre-season much?

In some ways. The gyms are closed, which is a pretty big part of our training. So we’ve just been doing stuff at the house. That’s probably the only change we had to make because of restrictions. The tracks have been open and really good, so on the bike stuff has been great.

Some racers are looking forward to spending a whole week in one city, rather than flying in and flying out in a matter of a few days. Are you among that group?

No (laughs). I just want to race and go home. I wished we had a normal season, but I’m just excited that we are going racing. But yeah, I hate hotel living.

So I take it that you won’t be going out and enjoying the city?

Well I mean, I’ll probably check the city out a little. At last year’s Salt Lake City rounds, I didn’t bring anything but clothes. This time, I was a little smarter and brought my PS4, so I’ll be grinding on Call of Duty (laughs). 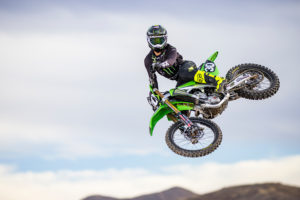 With how contagious the Covid-19 infection is, unfortunately, it’s inevitable that people are going to test positive and have to sit out some rounds. Is that something you have thought about?

Yeah, we’re praying it doesn’t happen to us. The scary thing is that some people are asymptomatic, so you could have it even if you don’t feel sick. I’m wearing my mask at pretty much all times and doing everything I can to stay healthy. It’s definitely something that is on my mind almost constantly, so I just hope I don’t test positive.

How scary is it being in an airport? Sure people are wearing masks, but everyone is still crowded together.

Yeah, it’s very sketchy. We just got in and got out today.