Kickstart | Generation Next At The 2020 Mini Os 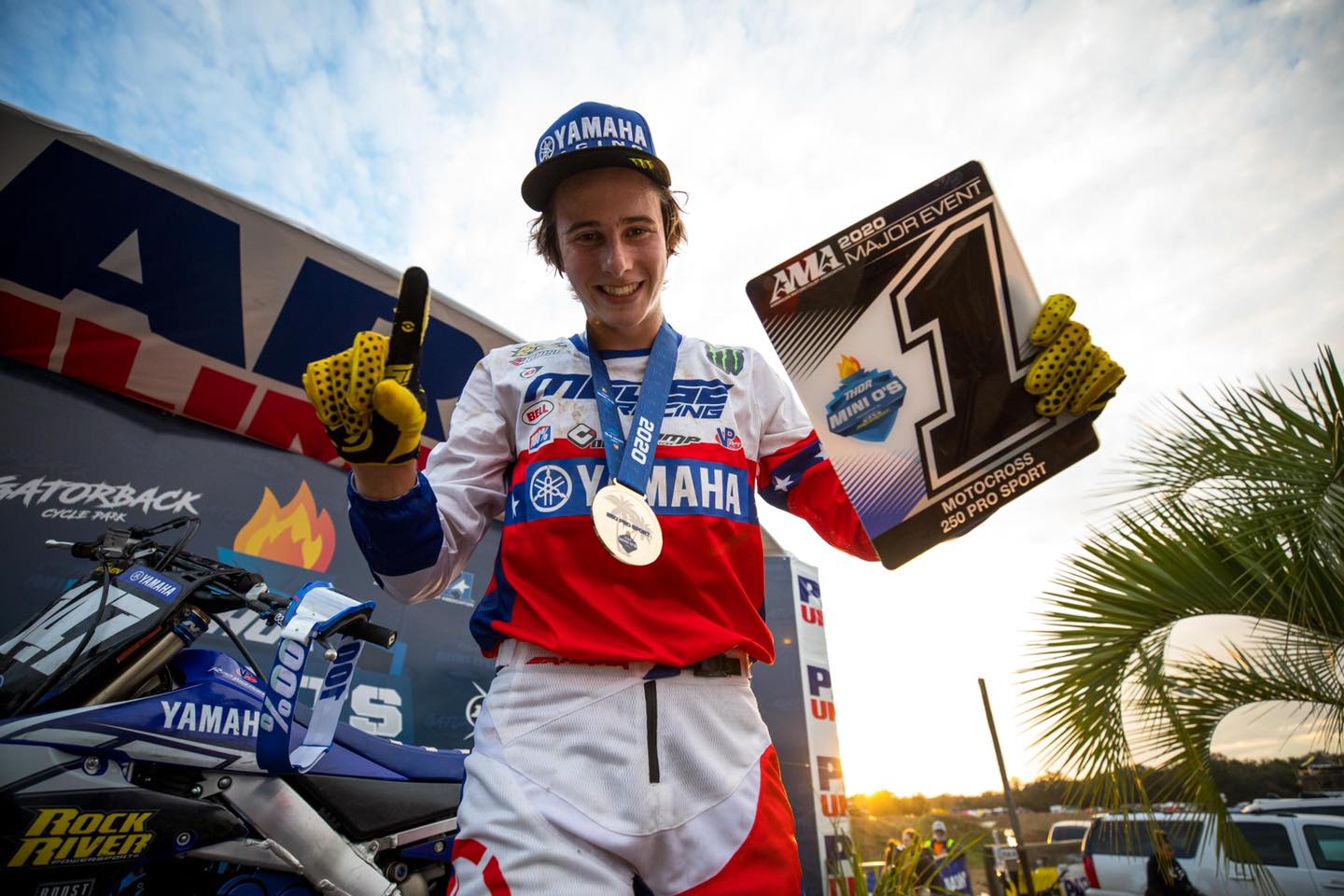 Recently I wrote that we should appreciate the golden era we’re seeing in the 450 Class because it’s uncertain how much longer these guys will be in action. Don’t worry, we’ve got a few more years of Tomac-Roczen-Webb-Barcia-Anderson to enjoy while Webb-Osborne-Cianciarulo-Ferrandis-Sexton fight for status in the elite class and Martin-Forkner-Cooper-Lawrence-Hampshire-Marchbanks attempt to reach their full potential. The talent pool is really an infinity pool…

Though pro racing gets most of my attention, I look forward to the marquee amateur events that dot the calendar and click on the live stream when the A-B-Schoolboy divisions hit the track at Freestone-Loretta’s-Mini Os. Debates about these battles always occur between diehard internet fans, and because what happens at these races isn’t seen as widely as Supercross or the Nationals, the stories get a little exaggerated sometimes. But that’s all part of the allure to amateur racing.

Everyone knows the Mini Os for a few reasons. Held at Gatorback Cycle Park in Florida, the week-long event takes place during the Thanksgiving holiday week, is the last big race of the year, and one of the few times that we see amateur riders on a Supercross-style track. Sure, the SX layout looks more like a local practice track than it does Anaheim One, but that’s because it has to suit riders in every class, from 50cc to 250 Pro Sport to 50+, and the low difficulty level makes the motos more exciting. The fast guys always find their way to the front of the pack, but every now and then, there will be a shake-up in the running order.

This year’s running of the Mini Os was the biggest and best that it has been in years. No, for real. The 2020 trend of massive turnout at amateur races continued in Florida and more than 5000 entries were filed for the classes, which required run-offs on Sunday that seeded the field for certain divisions. Every lap from Sunday to Saturday was streamed by RacerTV to YouTube, seen by people around the world. What a time to be alive.

That’s how I saw it all. The Florida vibe was broadcast into my Illinois living room through drone shots and cameramen and I rewound key moments of the motos at will between shots of espresso. You can still have a view from 1000 miles away, right? 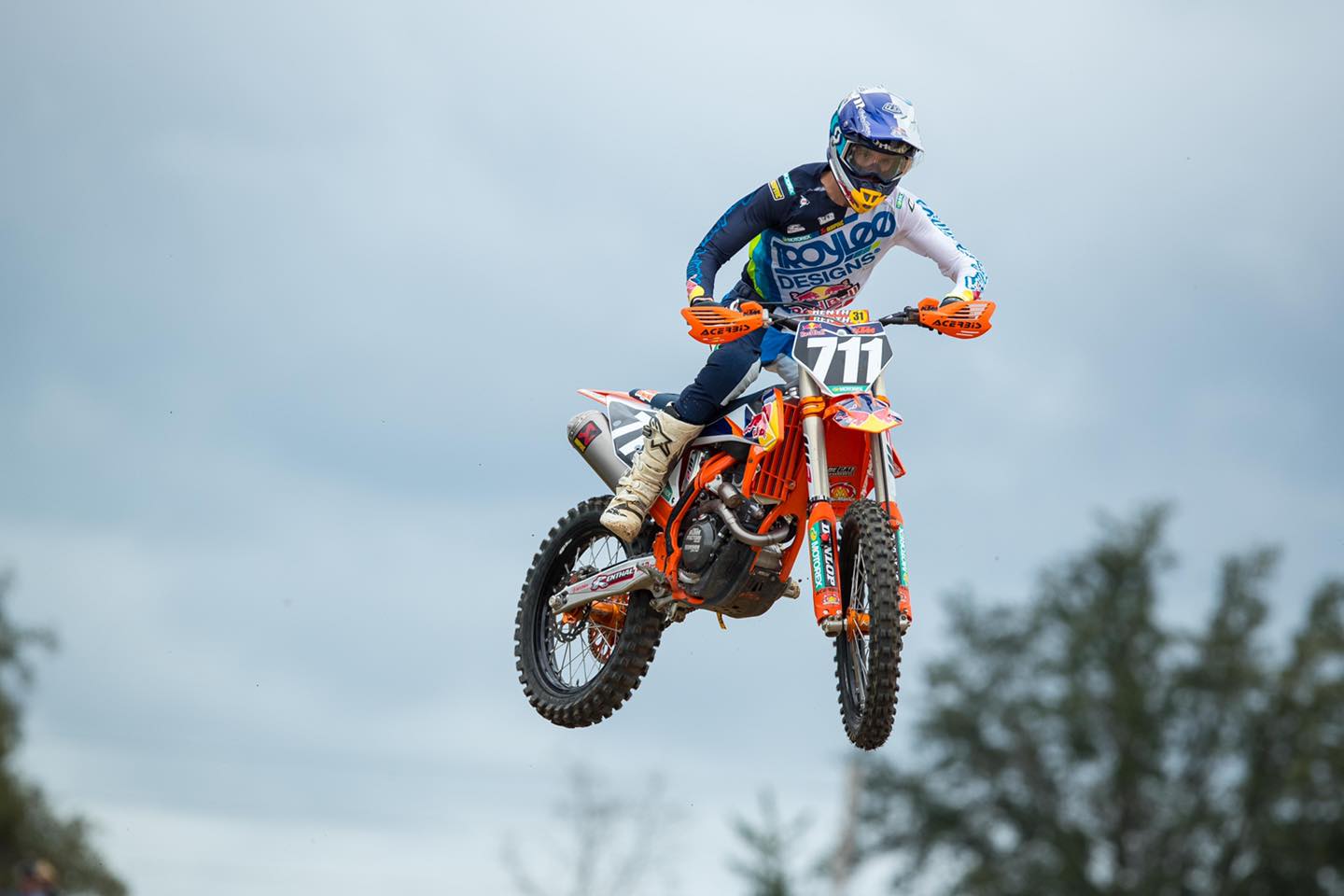 There was extra importance on the 250 Pro Sport and 250 A SX races this year. With Supercross Futures canceled in 2020, the AMA decided that a top-20 finish at the Mini Os in either class would earn a rider two points for their AMA Pro SX license and doing it in both would get a rider all four points for eligibility in the 2021 Monster Energy Supercross Series.

Brothers Jake and Ty Masterpool and teenager Max Vohland were on the starting line for only those two classes. It’d be hard to find a group of riders in more different circumstances. Vohland is poised to start his pro career with Red Bull KTM, a three-year contract that his father negotiated to get in return for his immediate attempt at Supercross. The Masterpool brothers showed up to the race with unmarked KTM bikes and without support from any major team, are Nationally ranked in AMA Pro Racing’s numbers for 2021, and have never lined up for a Supercross race reportedly due to the family’s decision to wait until both boys were “ready.” Getting certification to race inside stadiums next year was the reason all three were at the Mini Os and the same amount of points were awarded, no matter if they finished third or thirteenth.

The “play it safe” mindset wasn’t shared by everyone. Guys like Levi Kitchen, Nate Thrasher, and Matt LeBlanc made it clear how much they wanted to win every time they pulled onto the track and offered a preview of what to expect in 2021 and beyond. Kitchen is a new addition to the A Class but there was plenty of hype around the Rock River Yamaha rider after he swept the B Limited championships at Loretta’s last August and an efficient riding style. Trust us when we say that every high-level race team manager knows about Levi Kitchen. Nate Thrasher is near the end of his accomplished amateur career and thanks to a recently signed contract with Star Racing, is poised to join the pro ranks sometime in 2021. Thrasher has the opportunity that high-level riders hope for but understands it comes with increased expectations and pressure. The same Star Racing-with great power comes great responsibility plan goes for LeBlanc, but unlike Thrasher, he’s a little younger and has at least one more year to develop.

Kitchen and Thrasher left the Mini Os with all eight of the 250 A/250 Pro Sport/450 A/450 Pro Sport championships in their gear bags. Six of the number one plates went to Kitchen (all four classes in SX, both Pro Sport classes in MX) and two went to Thrasher (250 A and 450 A in MX). That’s the definition of domination.

It’s still very early and this might be a bit of a stretch, but Kitchen established himself as the guy to beat next year. He has the speed (lap times were some of the fastest of the week), can get the holeshot, control a run from first place, or recover from a poor start to a podium finish. Thrasher has the same raw speed, the ability to keep a quick pace late in the moto, more overall experience in the A Class, and works out with race-winning pros daily, but it’s almost time for him to move on to bigger things.

A few things that might not seem like much now, but could become much bigger in the future, started at the Mini Os. FXR/Chaparral/Honda will now be part of Honda’s presence at amateur races and they supported Cullin Park for the A-Pro Sport races; Park scored top-five finishes in seven of the eight elite classes. Kaden Amerine, Jack Chambers, Slade Smith, and Luke Kalaitzian all posted respectable finishes and added some more intrigue to results. All of the riders mentioned are a few months-years away from being in the pro series.