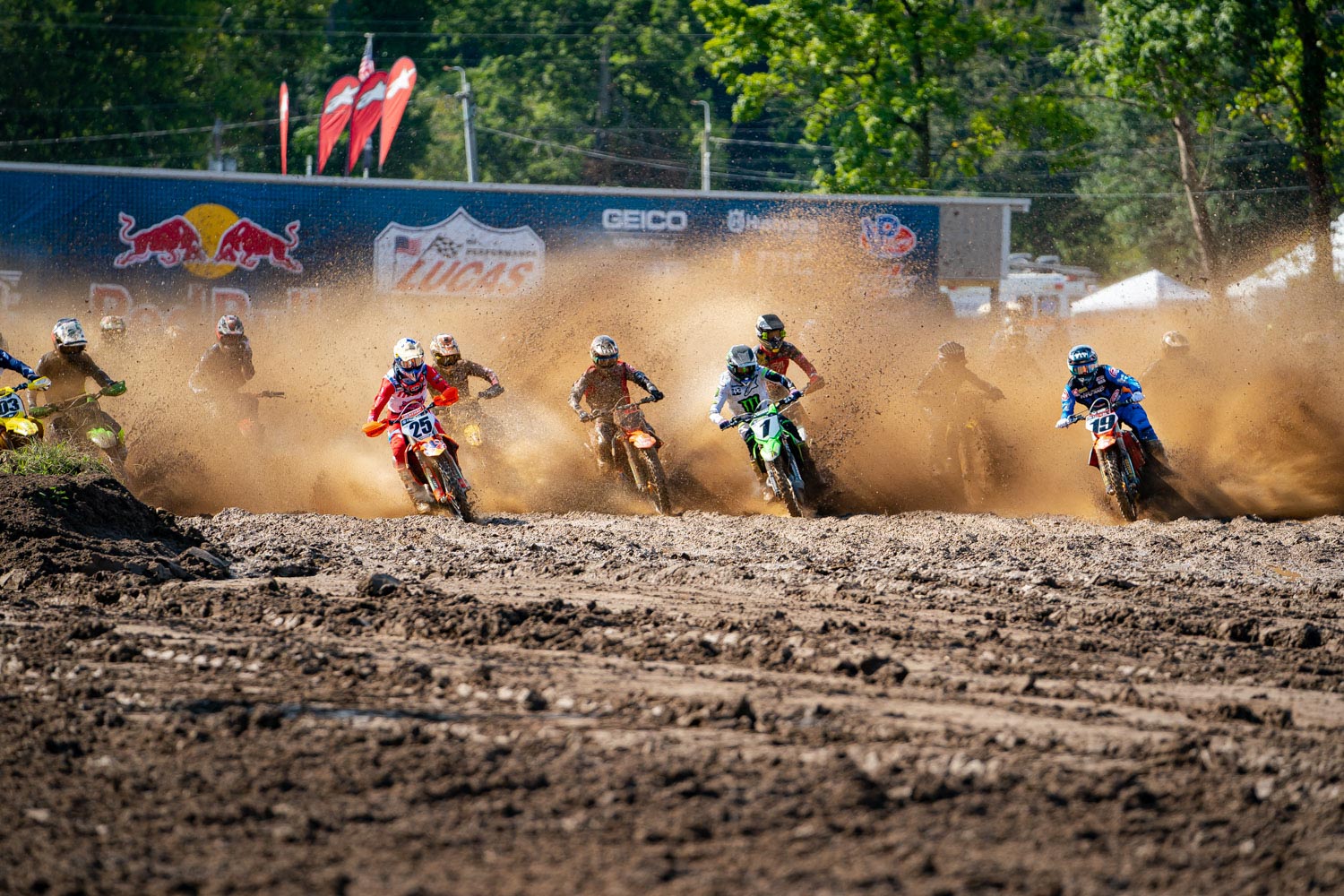 No need to talk about the trials and tribulations that occurred through the last twelve months. This year has been one that we will never forget, but before we turn the calendar over, let’s take one last look back at the on-track happenings from the 2020 Monster Energy Supercross Series and 2020 Lucas Oil Pro Motocross Championship.

Here’s to the New Year.

There's nothing like Anaheim One. Those few hours between practice and the opening ceremonies are electric, the last chance to check in with riders before the gate drops and to mingle with friends in the pit area. Can't wait until we can all get together under the Big A again.

Will we ever hear "Thunderstruck" over the speakers again? Chad Reed's retirement tour started off with an emotional opening ceremonies presentation and a nac-nac at Anaheim One. We posted this shot on Instagram and asked Reed if he has any appearances on the schedule next year, but unfortunately, it sounds like it's off the table in 2021.

Anaheim One's 450 Main Event lived up to the hype. Adam Cianciarulo led the early part of the race, something that thrilled pretty much everyone on hand, but until a rookie mistake allowed Justin Barcia the chance to close in, make the pass, and win the opening round for the second year in a row. Will Bam-Bam continue the streak in 2021 on his new bike and in a different stadium?

At long last. Ken Roczen's win at the St. Louis Supercross was massive, as it marked a turning point for the popular yet problem-plagued rider's life. A dominant performance that showcased his technique and fitness, the 20-minute moto proved that he still has what it takes to race at the front of the pack.

The 250 Main Event at the Anaheim Two Supercross was madness. People's attention was split between Jett Lawrence's sketchy-fast laps at the front and Dylan Ferrandis' hard charge from deep in the pack. Ferrandis had already made that ill-timed pass attempt on Craig that turned the crowd against him by the time this photo was taken, but things really got wild when Ferrandis made a close but clean pass on late in the race to take the win, and rookie Lawrence went down on his own the whoops. You could sense the tension in the air when Ferrandis was shown on the big screen during his podium interview. Seriously, the crowd was so loud that it felt like the air vibrated.

It's difficult to write about what happened to Brian Moreau at the Tampa Supercross. The teenager came into the weekend billed as KTM's prospect for future success and France's latest young prodigy but saw his career and life change just two laps into free practice. Stay strong, Brian.

Atlanta was another special city for Chad Reed, so he and the Feld Motorsports crew worked out a plan to have his kids be part of the opening ceremonies. How about that capacity crowd at Mercedes-Benz Stadium...

The Atlanta Supercross 450 Main Event was one of the best races of the year, complete with do-or-die charges and championship implications. Eli Tomac and Justin Barcia's battle continued after a 20-minute moto, as the two old foes exchanged words that were just as aggressive as the on-track passes and took their rivalry to a new level. Watching it all happen from just a few feet away was incredible.

Two riders, tied in the championship, racing for the win. The Daytona Supercross was the race of a lifetime, and unbeknownst to anyone at the time, ultimately was the end of an era.

The highlight of the lockdown was the Moto Fite Klub. Held in at Youngstown MX, a rad little track that sits between industrial sites in eastern Ohio, the lowkey race brought together icons from all eras and paired them up for head-to-head battles. Of course, it ended with a Mike Alessi-Ryan Villopoto rematch that was won by the 800.

All seven rounds of the Supercross series in Salt Lake City were important in their own ways, but the second race stands out the most. The first-ever Wednesday night race came at the height of the summer's social turmoil, so it was surreal to watch Malcolm Stewart win his first 450 Class Heat Race, with Big James placed perfectly in the stands of Rice Eccles Stadium, at the same time that thousands marched through the city's streets and helicopters flew overhead.

Mud races are always memorable, and that's especially true of the third Supercross round in Salt Lake City. The way Eli Tomac and Cooper Webb powered their way around the track without much issue, lapped through the field, battled into the final laps made it one of the year's best races.

Cooper Webb and Ken Roczen's rivalry is for real, and it was on full display during their 450 Class Heat Race at the Salt Lake City Four Supercross when the two traded the top spot a handful of times in the short race. Inspired by Michael Jordan's post-dunk moves and confidence shown in the Last Dance, Webb looked right at Roczen when they crossed the finish line.

Chase Sexton, Dylan Ferrandis, and Eli Tomac shared the same objective at the Salt Lake City Seven Supercross: clinch the championship. Austin Forkner's crash led to a red flag and restart, which allowed Ferrandis the chance to click off laps unpressured on his way to a second title. Sexton's win in the East-West Showdown was a fitting end to his 250 Class career, as it proved he really was one of the top riders in the division. Despite immense pressure, Tomac avoided any issue during the 450 Main Event, cruised to the checkered flag, and claimed the number one plate that had eluded him for years.

Fire drill. Zach Osborne's fairytale summer had its share of plot twists, including the stressful moments when his bike wouldn't start before the lone practice at Loretta Lynn's Two. The team managed to get the bike running just in time for the B Group session, which officials allowed Osborne to join and thus, qualify for the day's race.

It takes a special type of person to go wide-open through the mud alongside 39 other equally-deranged riders.

That Marvin Musquin came out of turn two Ironman Raceway, the spot he severely injured his knee one year prior, at the front of the pack was a success in itself, but the way the French rider went on to win the moto was a real triumph.

You never forget your first.

Race of the year? It's hard to top the last laps of 250 Moto Two at Spring Creek. Jeremy Martin and Dylan Ferrandis were in the middle of their run for the 250 Class championship and split by only a handful of points when they lined up at the track owned by the Martin family. The Minnesota fans cheered both riders on equally on through the final laps and erupted when the racers crossed the finish line within feet of each other.

A preview of what's to come in future race seasons?

Jordan Jarvis added her name to a shortlist of female racers who have raced a Pro Motocross event when she was called in and lined up for 250 Moto Two at the Florida Motocross. Jarvis will pursue a spot on the gate through 2021 in both Supercross and motocross.

Zach Osborne and Eli Tomac didn't have many head-to-head battles this year, but it was incredible when they did, like during 450 Moto Two at the Florida Motocross. Osborne withstood a trademark Tomac attack in the brutal Florida heat to win the race outright, a result that put him much closer to the championship and in the elite category once and for all.

Tomac was under attack all summer. DNFs early in the season and a lack of wins made a fourth-straight championship unlikely, while any small mistake got magnified by teammate Adam Cianciarulo's success. ET3 ended the season on a high-note at Fox Raceway when he came from way back, tracked down AC9, and made a pass for the win in the final laps.

Dylan Ferrandis cemented his status as one of the best 250 Class riders of his generation with the 250 MX championship, his third title in two seasons.

The level of respect Ferrandis and Martin shared for each other made their championship battle even better.

GEICO Honda ended in the most bittersweet way possible: a win. Here's to the staff of the legacy team for all of their accomplishments.

Chase Sexton came into the summer determined to get a moto win. It took up until the last race for the 450 Class rookie to get it done, but the timing made it the perfect motivator for a long offseason of work.

Hard to find two riders more different than Osborne and Cianciarulo. One is a married father of two that has found success late in his career, the other a single young guy that's just getting started. It'll be interesting to see what awaits them in 2021.

On to next year.