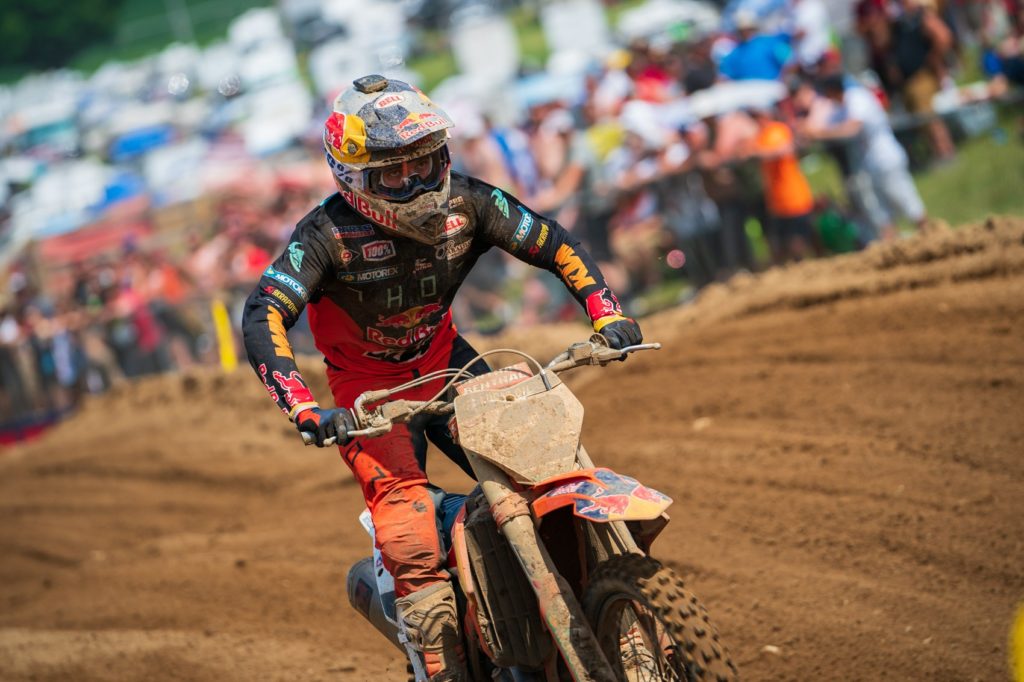 This is going to be an interesting summer. Last week’s announcement that the 2020 Lucas Oil Pro Motocross Championship will be a nine-round series brought a small, albeit much-needed sense of resolve to an unfathomable season. We now know that August to October will be spent running around the US, an attempt to cram as much action as possible into a schedule that is subject to change at any time, but it’s an endeavor that pretty much has to be done to keep professional motocross in America going.

The press release had just enough to pacify the masses, with the dates and locations announced, as well as clarification that certain things at the track won’t be like once were. “The paddock will be closed to the general public, with access limited to properly credentialed parties only and facemasks required at all times. Hand-washing stations and hand sanitizer stands will be placed throughout the venues and personal hygiene education signage will be prominent,” outlined the safety measures, similar to what we experienced during the month in Utah for Supercross. While those of us with season passes will be required to wear a face-covering when at the track, the same strict rule wasn’t in place for the public. But that doesn’t mean things are all clear for fans…

“Select events will feature limited spectator capacity, while others will be conducted exclusively for participants, professional and amateur, with attendance limited to crew members and family. All events will feature an amateur racing component, both before and after the professional race day,” declared the statement. What races will/won’t have general admission access wasn’t outlined, but everyone quickly assumed the masses wouldn’t be allowed at Washougal and RedBud due to the strict measures that their state governments have put in place, and the two venues confirmed the news over the weekend. It’s worth pointing out that the Ironman round in Indiana and the WW Motocross round in Florida are currently the only two dates that you purchase tickets to attend online, but that’s probably because those sites have been running for months.

So no, you will not be slamming beers in Lot B at RedBud or climbing Horsepower Hill at Washougal. It’s a damn shame, but not all hope is lost because the amateur racing element is a crucial detail. Although Washington and Michigan have restrictions in place regarding general attendance at sporting events, the fact that motocross is an outdoor activity and participant-supported event are what allows the amateur day portions to take place. Tracks around the country have made use of this detail in the last few months, including RedBud and Washougal, so it’s smart for MX Sports and the race promoters to do the same. Die-hard race fans already spend money so that they can race a National-caliber track during the pro weekend and even more are likely to do so if it means they could be one of a few to watch the motos in-person (maybe this could be a Moto Vacation like Anton and Crutcher talked about in last week’s Swapmoto Podcast). The income from the amateur race entries will be used to offset the money lost from a lack of ticket sales, including the pro purse that the promoter is responsible for covering. Seriously, props to the Race Leadership Team for coming up with this sort of plan.

And for those of you wondering, yes, an active NBC Sports Gold Pass subscription will get you live access to all nine races. The television package is an important part of the Lucas Oil Pro Motocross Championship structure and the network will support every round just like they’ve done for years. Be sure to double-check your account at some point between now and the Loretta Lynn’s opener in August so you aren’t scrambling on race day. 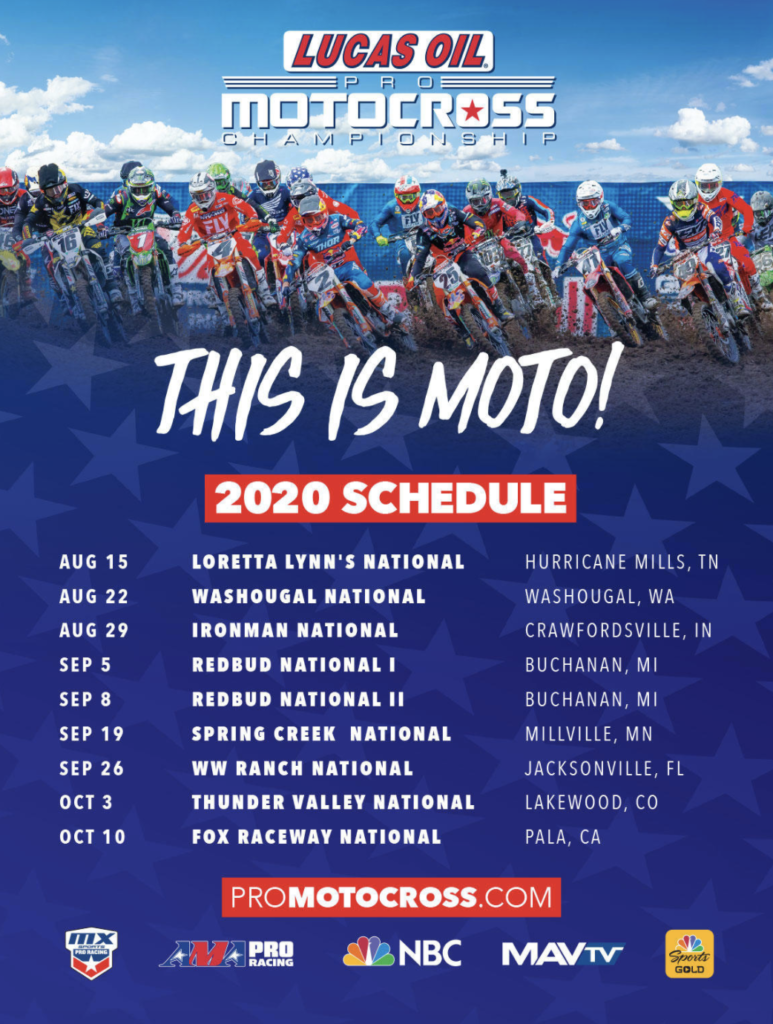 But the schedule announcement wasn’t met with universal acclaim from the teams. Per our conversations with people in the paddock, a prior meeting between the Race Leadership Team and the race teams made it seem like a six-race series at three venues was the most likely outcome, so to be given a nine-race run with multiple cross-country trips was a massive surprise. The first three rounds will go from Tennessee to Washington and back to Indiana in three weekends, a trip that will total 4516 miles in about 14 days. Even with diesel prices the lowest they’ve been in years, this will be an expensive summer on the road, and that’s something teams feel is excessive given the financial fallout caused by the pandemic. It’s a very tricky issue because while it will be a burden for the teams, it will bring much-needed money to the track owners.

The cost isn’t the only thing about the travel that concerns the teams. A month-long residency in Utah meant that teams were able to limit the exposure of their staff to the “general population” and thus, reduced the risk of possible transmission. Yeah, riders and teams explored SLC between races, but they weren’t in the cramped spaces of boarding areas and airplanes every few days. That won’t be the case this summer because this plan will require plenty of time in transit, and some of the biggest OEMs are not eager for their staff to have a higher chance of exposure.

Teams know that they have one purpose, to race when the gate drops, and they’ve spent the last few weeks putting in work so that they’re ready for round one. The Southern California practice tracks have been packed with pro riders putting in their motos, while others have scattered across the country to their preferred training locales like the Midwest, East Coast, and Florida. An 18-Moto schedule is something that no one could have predicted at the start of the year and every rider knows that they’ll only have so many chances to make their mark in their chosen class. Think about it: in a normal year, the field of competitors will go all-out during Motos 15-16-17-18 and that’s when the best battles often occur.

It’s not ideal, not by any means, and there’s still so much uncertainty that could bring it to a halt at any moment. We all have to keep in mind that these races hinge on how the virus is contained around the country and what health officials determine is best for their populations, which could cut the nine-race number (a six-race series is the bare minimum that MX Sports and the teams have agreed to do). But the field of competitors features some of the top talent in recent history, aboard bikes that have never been better, many of whom are in tip-top physical shape and all of have something to prove.

This is going to be a massive effort that deserves a motocross fan’s undivided attention. Make sure you watch every lap.

Ken Roczen | Will Miss All Of 2020 Pro Motocross

Kickstart | Calm Before The Storm