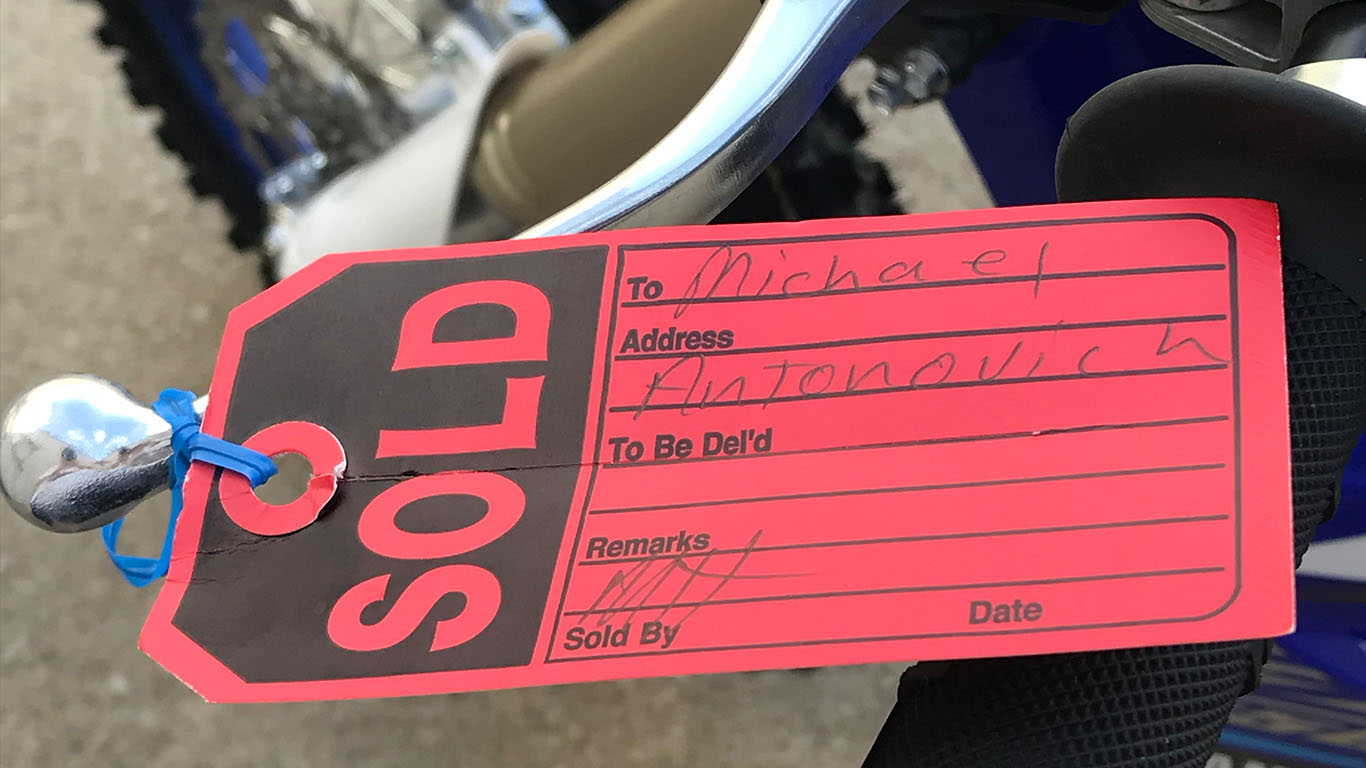 The last few days have been spent working on projects that we’re pitching to the industry for what’s set to be year three of Swapmoto Live, and as much as I’d like to say that it’s why Kickstart is delayed, it’s not. I wasn’t really sure what to cover until just a little bit ago, when I remembered I’m a small business owner that has a very large stake in motocross.

The seven years I personally spent in the “safety” of a corporation had plenty of perks, like a business AMEX, the occasional mid-week margarita lunch, and a diverse collection of coworkers that all brought different energy, but there were plenty of drawbacks, including the favoritism that certain titles had over others, a handful of meetings with HR about things I definitely should have been fired for, and the suspicion that the suits would come in at any moment and shut the whole thing down.

That uncertainty was heavy during most of my time at TransWorld, particularly after the company changed hands from Bonnier to Source Interlink in 2013. The way it was announced to our office was as hilarious as it was abrupt. The rep from Bonnier basically said, “Thanks for all your hard work, meet your new owner,” and was out the door before the realization hit anyone, to which our new boss at Source replied, “Well, I’ll let you all have a minute.”

Despite every attempt at keeping the company afloat including an “investment” in digital resources, a partnership with Discovery, cost-cutting measures to the print product, and multiple reductions in overall size, the executives were unable to keep the capitalist group that actually owned the thing happy. Eventually, TEN was sold to AMI, a routine business deal that led to a huge portion of the getting fired immediately while some of the rest were strung along until last week when the Carlsbad office shut down entirely.

While I still get a little emotional about how things at TWMX ended, I’m thankful for the time spent there and the chain of events that got us here. The freedom that Donn, Doni, Dominic, Chase, and I have is worth more than anything a corporation could ever offer and we’re all happier than ever. But being independent has plenty of drawbacks. There’s no support system to prop us up like there was at Bonnier-Source-TEN and it’s entirely on us to make this happen every day-week-month. This “life on two-wheels” wouldn’t be possible without our partners and readers, and your support is something we’re all thankful for.

The last 11 months have been wild and they revealed how unpredictable things can be, particularly in our little world. Spring was a tense time and as we all waited to see what would happen with restrictions, some were forced to make quick decisions. A number of companies laid off their employees, either for a short time or for good, and everyone’s plans seemed to hinge on a return to racing.

Fortunately, the powersports industry was deemed “essential” just as the weather warmed up and consumers rushed to retailers with a pocket of stimulus money. The motorcycle industry was operating at full speed and reporting record sales at the exact same time the government reported record highs in unemployment and Fortune 500 companies were forced to restructure their workflow.

The spike in bike-gear-part sales is unbelievable and, depending on who you talk to, is either the start of a new generation for motorcycling or some recovery from the last economic crash. It’s too soon to say for sure, but how things go over the next six months will be critical and the outcome is completely, collectively up to us.

Hopefully, you’re in a position to spend some money this holiday season. If so, do everything possible to keep some of that in our industry. The talk of how small and vulnerable motocross is has never been louder than it is right now, and not to seem radical, but we’re not in a position to be bailed out by the government or to see a new surge of outside sponsorship money. It’s literally on us, the people involved, to keep things going through 2021 and long after.

There are a million ways, some much more expensive than others, but all of it is an investment in the sport. You can stick to the staples and wheel a bike out of the dealership, which will boost the OEM’s numbers and put some commission in the salesman’s pocket, snag some new gear from an online retailer that will use part of that money to sponsor a racing team or series, or buy tickets to Supercross or an Arenacross. The impact will still be huge even if you have less to spend and things like a suspension refresh/bike tune-up from the local service center, new graphics, innovative tools for the garage or parts for a bike, pre-paid entries to the local track, a t-shirt, or even some coffee will all add to the motocross economy. We can recommend plenty of people and companies in every category if you need some help.

As a guy that makes his entire income from motocross, I can tell you that this is a very exciting and uncertain time. The industry is anxious to see what happens through the holidays and the first part of the new year, which is when we’ll total up the financial details and get a further update to our “new normal.” Hopefully, the progress that we’ve seen in sales and plans to go racing continues because we’re in the middle of a golden era of technology and talent, but there are plans if things suddenly take a turn, and that would put even more stress on the industry as a whole.

To quote the anonymous Internet messageboard geniuses, “Speak With Your Wallet.”

Our friends at @xbrandgoggles have dropped an exciting new goggle, the Lucid, that is by far the most sophisticated, safety- and performance-oriented goggle it’s produced. We can’t wait to get our hands on a pair!

The new LUCID goggle is characterized by clear perception. It is created from over 35 years of R&D, experience, passion, and evolution in the goggle business. As the world evolves, so does clear vision and the need to see in the most demanding situations. The new LUCID goggle will progress vision and goggle function to the maximum with its incredible XDO, (Xtreme Definition Optics) lens technology. The XDO lens is injection molded from the highest quality impact resistant polycarbonate material for zero visual distortion.

A rugged DYAD rigid outer frame holds the lens in place and creates the ultimate seal for defense against flying debris and heavy roost. The outer frame is double-injected to a soft inner frame made from our exclusive POLYFLEX face-forming material. This allows the inner frame to form to varying face shapes creating the best seal and fit while eliminating virtually any pressure points. The LUCID goggle includes a detachable low-profile vented nose shield for added protection.

The LUCID WAVELATCH is a new type of lens locking system that keeps the XDO injected lens secure and sealed tight. It allows the rider to simply swap-out their lens to another tinted lens with just the slide of their thumb. Easy and quick!

The LUCID 20mm thick, 3D molded, multi-stage, face foam creates an unmatched fit for nearly every face shape. The foams third-layer, along with our innovative new moisture channel that is molded into the goggle frame, keeps the sweat from dripping or splashing onto the goggle lens. The FLOAIR moisture channel helps to direct the “sweat” down the sides of the frame rather than into your eyes.

The LUCID goggle offers one of the widest fields of view available in a goggle. It also allows the goggle to utilize a class-leading 45mm extra-tall roll-off system for absolute clear vision on the ugliest of days.

The mechanics hate the sand sections in @supercrosslive but they sure make for some fun photos. What do you think of sand in SX?
#swapmotolive #motocross #supercross #dirtbikes #moto #mx #sx ...