Kickstart | Twelve Down, Five To Go 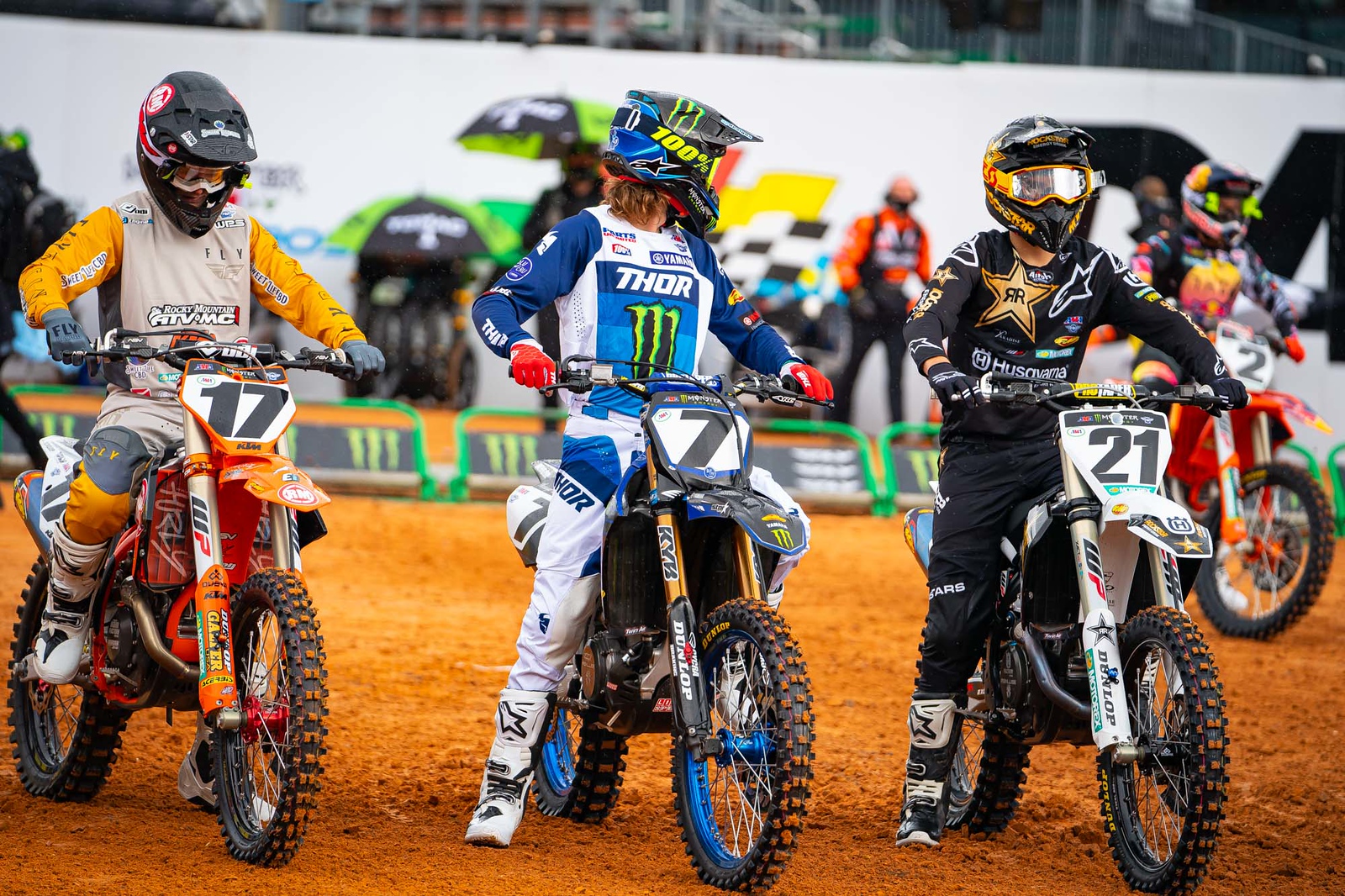 The next four weeks are going to be a whirlwind. Following 12 rounds of competition in carefully selected parts of the country, the 2021 Monster Energy Supercross Series will run five events at two venues in the course month, crown three champions, and close a chapter on an unforgettable time in the sport’s history. What will happen when the gates drop in Atlanta and Salt Lake City? Well, that’s anyone’s guess, and that makes us even more eager to see what the most competitive lineup of recent memory can do after a two-week break.

We’ll spare you talk about Webb-Roczen-Tomac/Cooper-McAdoo-Lawrence/Nichols-Craig in this write-up; those topics have been covered extensively already and will get the appropriate exposure in the coming days. Instead, we’ll focus on the potential these next few races could have on the sport’s future, particularly the time at Atlanta Motor Speedway. 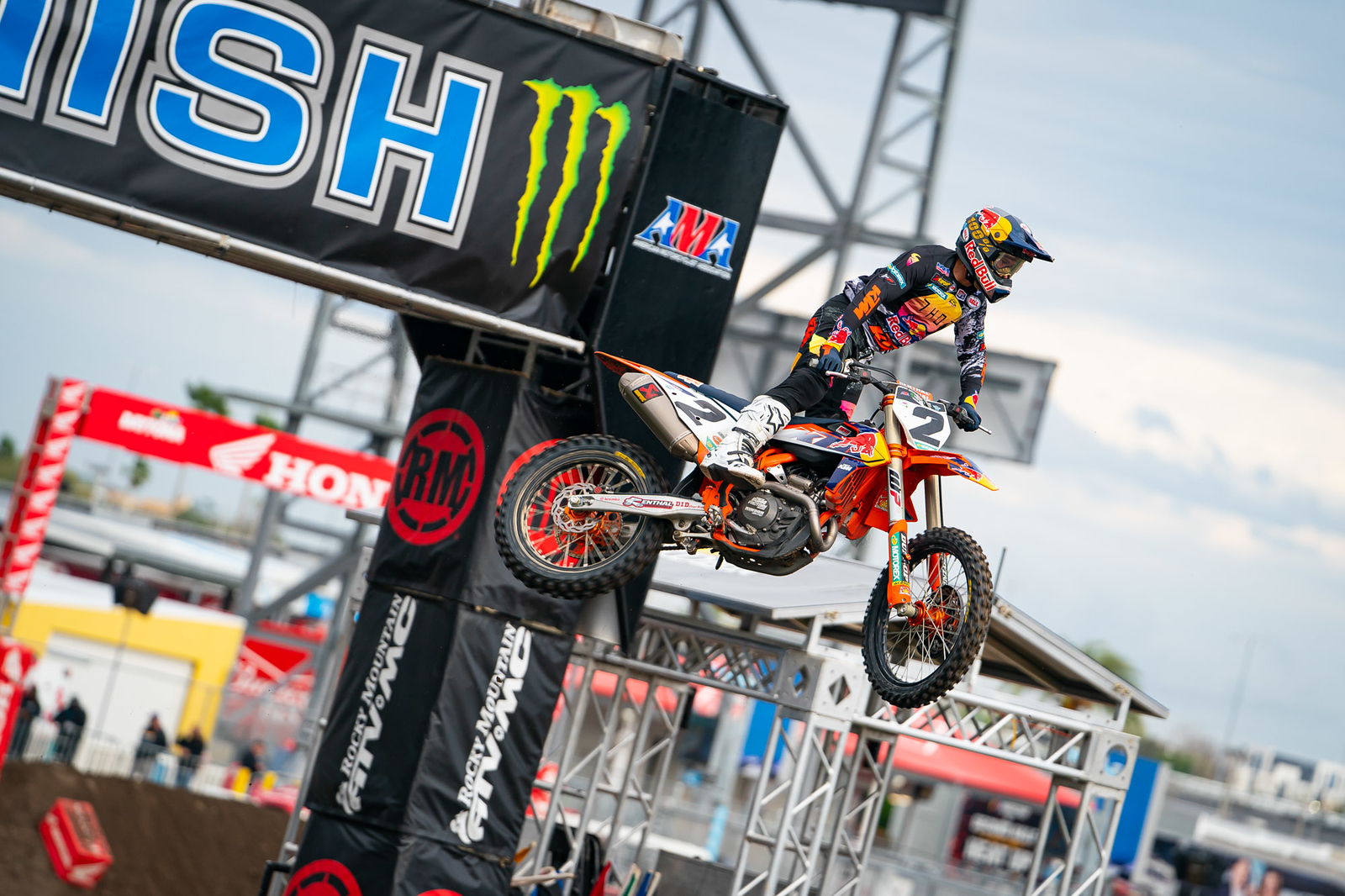 The pro side of the sport has followed the same general calendar for decades, with select races more celebrated the holidays they happen closest to. For years we knew to block off 17 of the first 18 Saturdays in the year for Supercross and that the summer months were spent traveling 12 times between Mother’s Day and Labor Day. It was a solid routine, but there were attempts by every major promoter to fill the few open dates with more events as time went on, and racers were openly talking about the downfalls of the loaded schedule pre-pandemic.

The last year has made people rethink how they do business and go about their lives (don’t bother telling us your opinion on the how-why), and professional motocross racing hasn’t been spared. Feld Entertainment and MX Sports have gone to great lengths to fulfill their race seasons, and there have many positives found in the necessary changes, including multiple SX races in quick succession, Nationals in the early autumn, and more off-weekends. We’re hoping that a few of these changes stick around when things return to “normal.” Things like mid-week races and race formats had talked about for years, and if they hadn’t been forced into reality, all of them would have stayed bench racing fodder.

And that’s why we’re eager to see what happens in Atlanta. The Southern round has been a staple to the Supercross series, with eras of racers associated with different venues, but the ongoing restrictions and issues made downtown’s Mercedes Benz Stadium unfeasible, and the city was left off Feld Entertainment’s initial schedule release. Its addition in the final schedule was met with equal parts praise and surprise, as no one expected the NASCAR track in nearby Hampton to be the replacement venue. 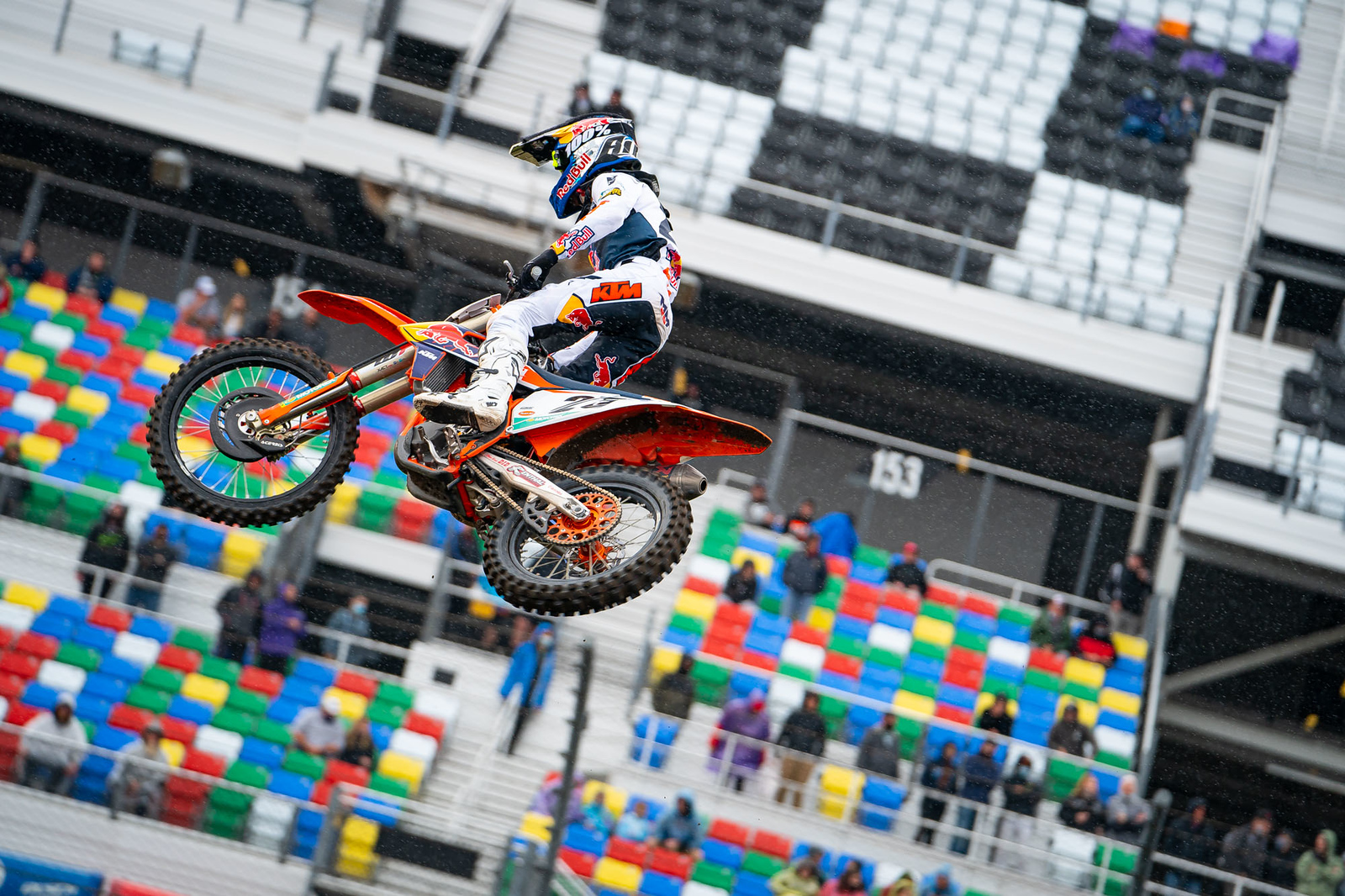 This won’t be the first time that Supercross has taken over an auto racing circuit. We all know that Daytona is one of the year’s most celebrated events, but there were past attempts to race on the tri-oval at Charlotte and drag strip at Joliet, and the model didn’t seem to catch on here the way some anticipated. (It’s proven to be a somewhat viable option overseas, though. MXGP has repeatedly built over sections of iconic European tracks like Assen and Monza with one-off courses, and it’ll be interesting to see if they go through the extensive efforts when crowds are allowed to return in mass or stay with the cost-effective natural terrain courses.)

With three rounds at an all-new venue, gigantic tracks, a Saturday-Tuesday-Saturday rotation, and a primetime spot on NBC, the Atlanta races will be a much-needed chance for the sport to see if changes can increase interest.

Atlanta Motor Speedway will have many of the same amenities as Daytona, but with no SX history to hide behind, critics won’t be shy when they point out the flaws. Teams will be corralled on a paved lot in the center of the property, not the garages, and fans will be kept in the bleachers, with no access to the front straightaway, so we anticipate some gripes about a “lack of atmosphere.” Thousands of tickets have been sold already, which is proof that people want to be back at events, and we hope they show up despite the forecasted rains.

But the most significant factor of all will be the track. Given free rein of the grass infield and parts of the pit lane, Feld Entertainment and Dirt Wurx are set to create three of the largest courses in the sport’s history, complete with long lanes and the usual SX obstacles. Past speedway races, including Daytona, have been scrutinized for their one-lined layouts and a lack of passing, but that’s something that Dirt Wurx hopes to fix through the use of hairpin turns and a half dozen rhythm sections. Massive tracks like this could be the fix for the “450s are too powerful” problem. Modern four-stroke bikes have enough oomph to get over any sort of jump (re-watch Arlington Three for proof) and can reach impressive speeds, so it’ll be interesting to see what riders can do on a track that stretches out over a few acres of flat land. 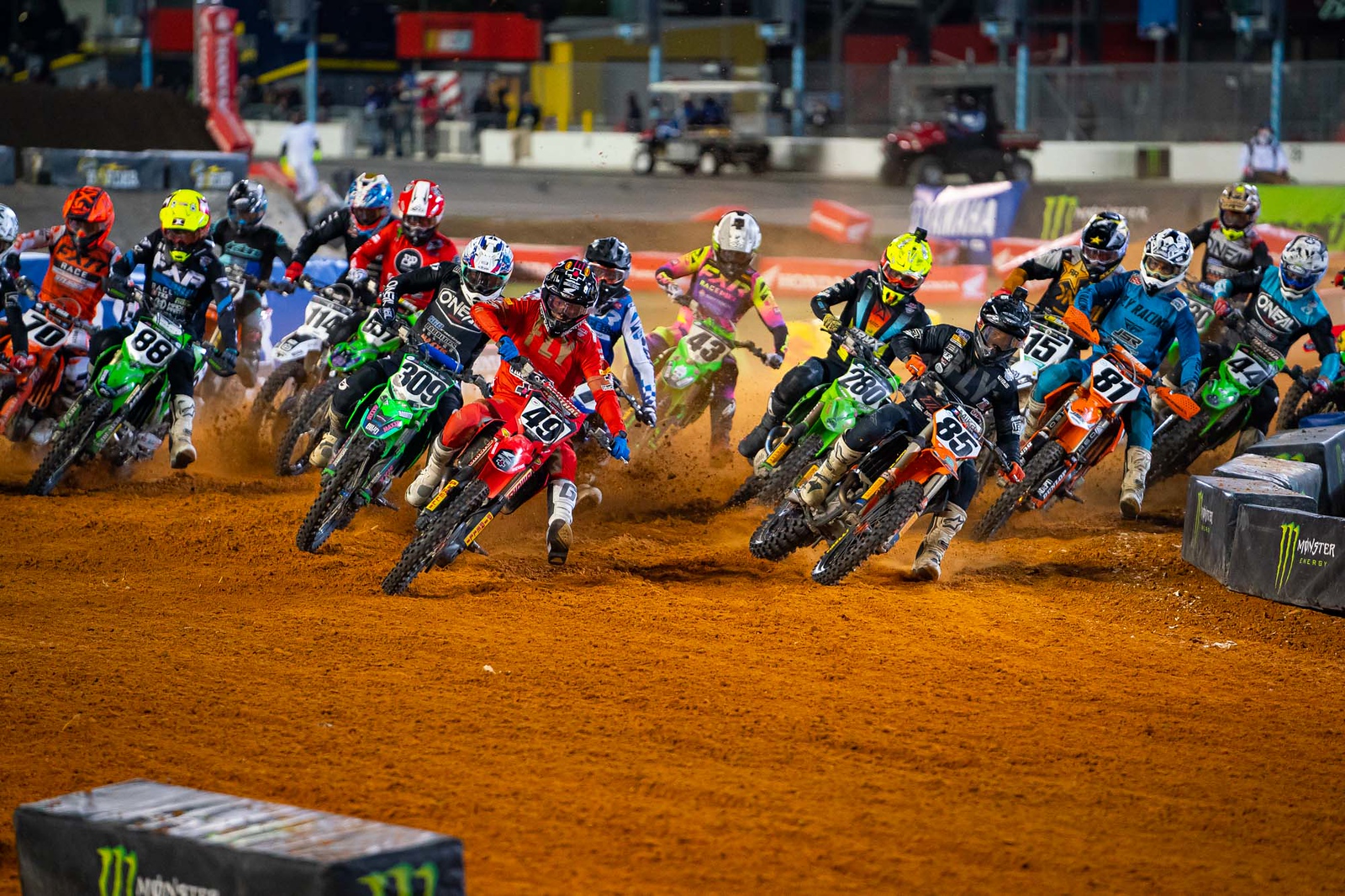 Finally, this decision to visit a new venue could be a sign of things to come for Supercross. Feld Entertainment has expressed interest in lengthening their schedule for years, but the SX-MX agenda in the US, costs associated with international events, and stadium availability during the baseball-football seasons have restricted them from doing so. If the Atlanta race goes well, the promoters could easily replicate it at other pieces of property owned by Speedway Motorsports, such as Charlotte, Kentucky, and Bristol (the Tennessee track recently announced they will cover the high-banks with dirt in 2022) and increase the total number of races each season. It’s not as far-fetched as you think; Atlanta Motor Speedway will hold Monster Jam and American Flat track in the weeks following Supercross, using the same dirt and the same spot.

It’s wild to see how much motocross has changed in just 14 months. In early 2020, the vibe in the pits was a bit grim as teams searched for title sponsors, and riders struggled with what seemed like an endless race schedule. The unexpected break and surge in bike sales helped reignite people’s interest in motocross, and if managed correctly, the next two years could propel the industry forward.

How will things play out? Who knows, but at least we’re getting the chance. 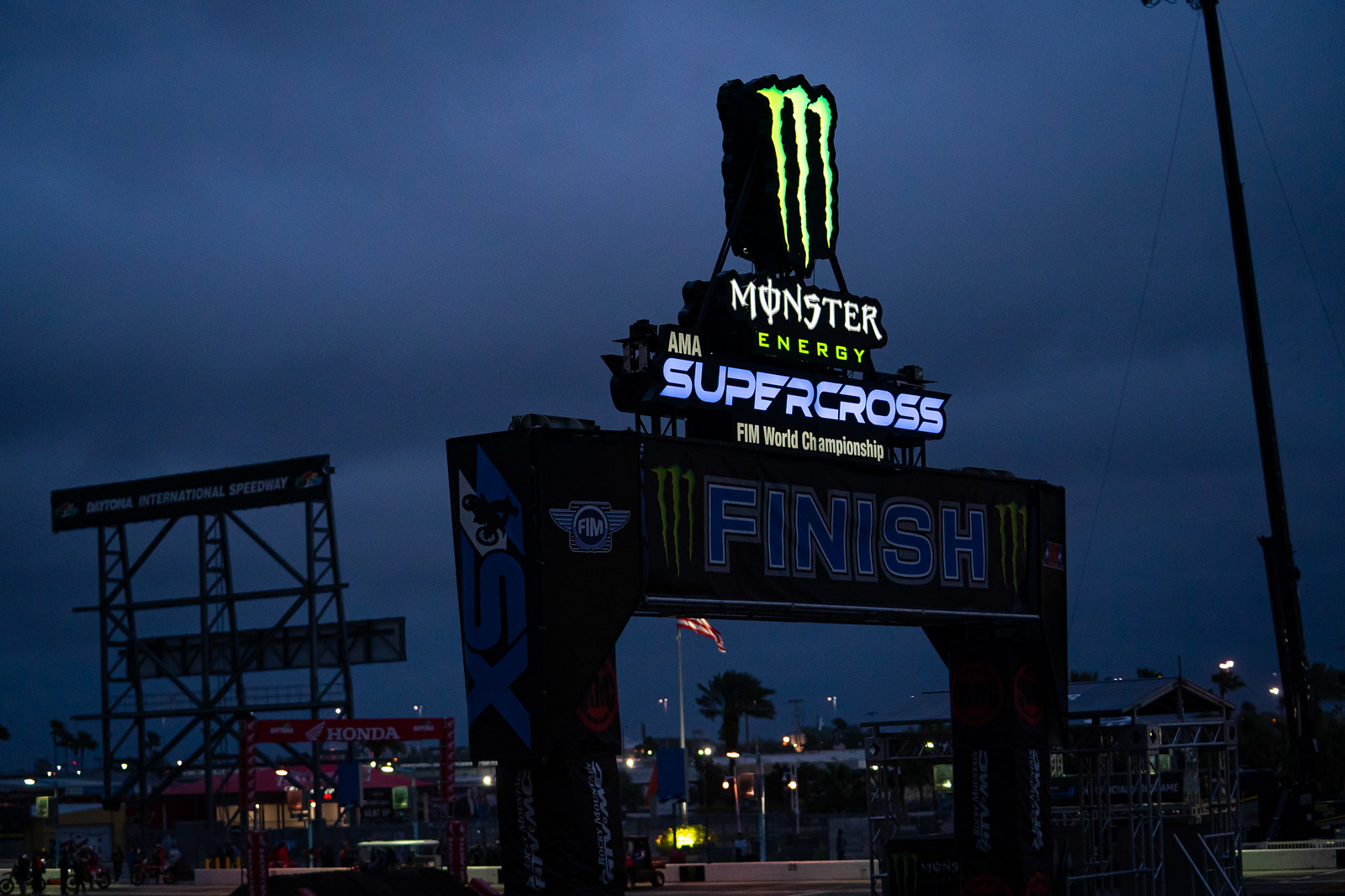