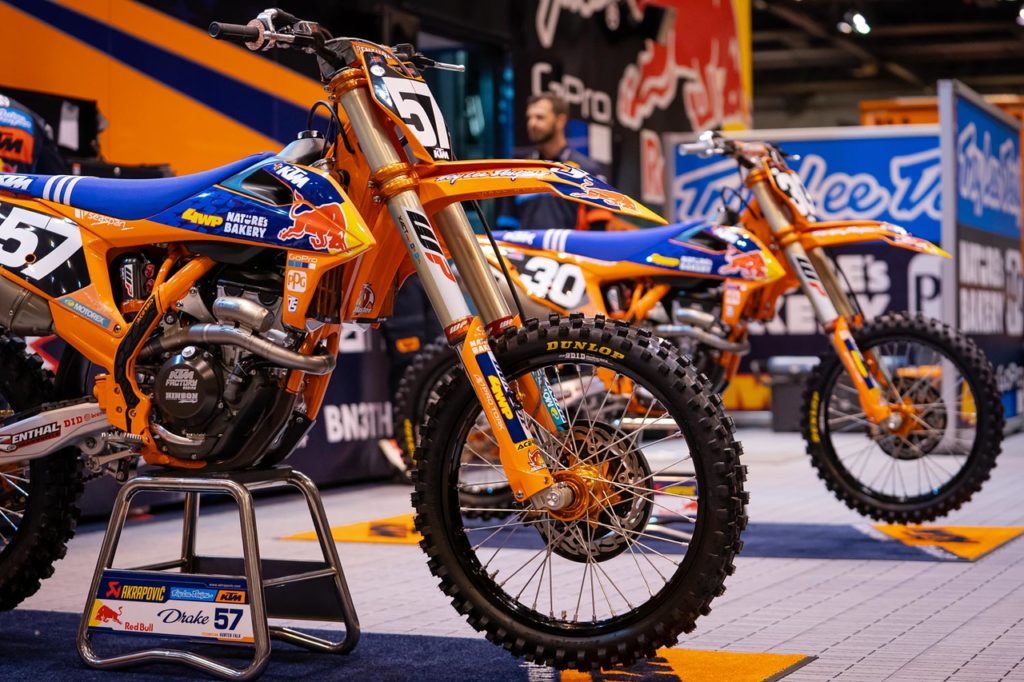 Editor’s Note: I’ve sat down and tried to write this post every day since last Friday, but constant changes from the COVID-19 crisis made each keystroke obsolete. So, this is the best information we have as of Monday afternoon…

The Coronavirus caught my attention in early January, just as travel for the 2020 Monster Energy Supercross Series began. Hours in airports and on runways were spent skimming articles of how a mysterious illness had severely impacted one region in China, but at that time, there was little to no concern that it would get out of Wuhan and the mortality rate didn’t really seem to come up a lot. Then came videos of government officials literally welding doors of apartment complexes shut so that those infected could not go out and spread whatever it was to a larger population, yet isolated cases popped up in places around the world and the United States. Soon, the go-go pace of Supercross took priority and the only mentions I saw of COVID-19 was how certain teams in Formula1 had taken measures to protect their staff during the preseason tests. At no point in January did I think what had happened in Wuhan would completely rattle the way of life in the US. Why would it? There was little mention of the topic in the news and we were in the middle of one of the best race seasons in recent memory.

The constant shuffle of the MotoGP calendar that occurred in February is what really indicated to me that something was amiss and after that, I paid closer attention to things as it unfolded in Europe. Still, we went on like nothing was wrong and I loaded up the rental car for an 11-day run through the Southeast for the Atlanta and Daytona Supercross rounds. It was at some point between those two races that I started to doubt the likelihood that the Seattle Supercross would happen. I hadn’t bought the plane ticket to Washington yet, mostly because I wanted to see what would happen with the price of my desired route and casual conversations with friends in the garages at Daytona made it sound like I wouldn’t need to, as there was a quiet but strong rumor that the race was already in jeopardy. I passed one of Feld Entertainment’s tractor-trailers on my way out of Florida the next morning and looked at the schedule that was posted on the back door of the rig, confident that we’d still race during the season but leary that I’d have dumplings at Din Tai Fung in Seattle. 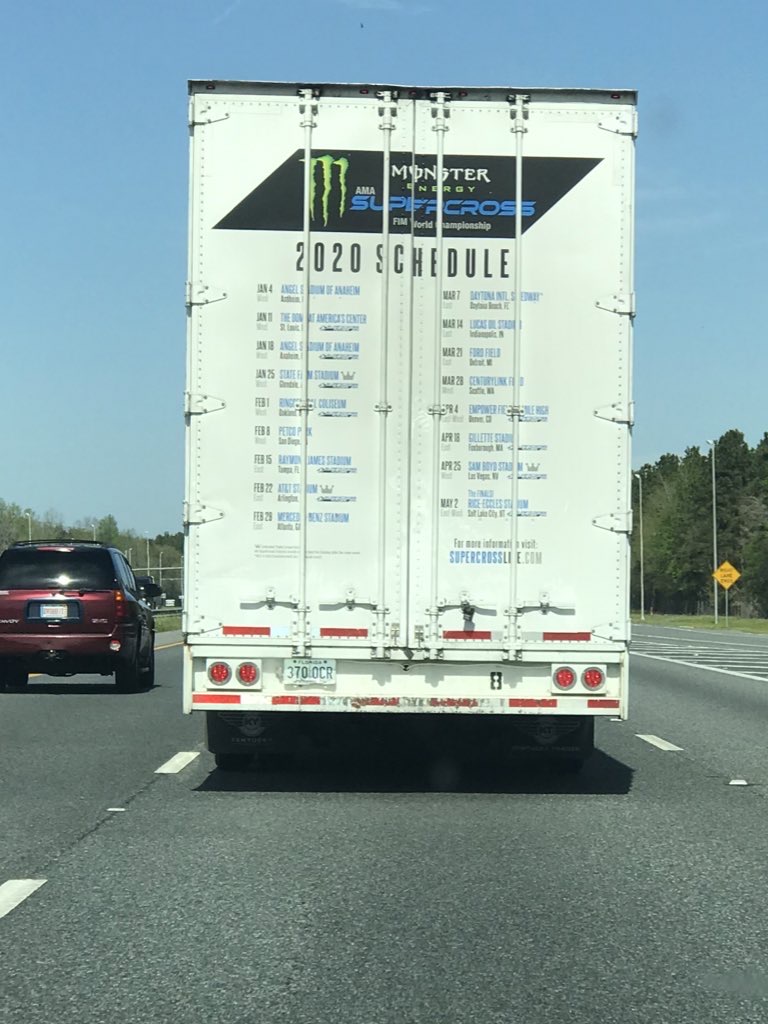 Three days later, everything changed. The talk of holding sporting events in empty stadiums had swirled for a few days, but even that seemed like a long shot until Wednesday night and the NBA’s sudden decision to halt their season after a player tested positive for COVID-19. Thursday was a blur because I spent the entire day on the phone calling our staff, employees at Feld Entertainment, race teams, and even Lucas Oil Stadium trying to figure out what was going to happen with the Indianapolis Supercross. At 9 AM, the word was that the race would happen with a full crowd, but that it would be the last “normal” race for the time being. By 11 AM, I was told that there would be no fans allowed, that access would be limited to those with hard card credentials, and that teams would restrict their pit areas to just staff members as a precautionary measure. By 5 PM, the Indianapolis race was canceled completely and the Detroit round was axed moments later. That night I went to dinner with my wife at the only restaurant in our little town, had a beer, and talked about how bummed I was that we wouldn’t get to experience a “private” race in a completely vacant building.

Friday was even more surreal. With nowhere to be, I hung out around the house and hit the phones again. Soon came the news that all production of KTM/Husqvarna/GasGas motorcycles would be paused in Austria due to a “supply chain issue” from their Italian component providers, some announcements by teams that they would skip upcoming appearances, and then the cancellation of the Foxborough and Denver Supercross events. The enormity of the situation sank in that afternoon, as I began to feel concerns for the privateers that fund their efforts week to week through purse money, staff members that are critical to teams, and the industry as a whole due to the stock market’s nosedive. Contact with staff at Feld Entertainment and the AMA calmed my concerns a bit because everyone was confident that there would be races run and championships awarded in due time.

We in the industry had all heard that Feld Entertainment intended to get bikes back on the track with plans of multiple rounds at Sam Boyd Stadium in Las Vegas, an idea that had some promise until the casinos in Sin City announced that they would close down completely by the middle of the week. I was told of another call between Feld Entertainment and the race teams at some point last week, during which the teams told the promoters that the preferred to run the Supercross races at some point in the Spring, before they turned their focus to the Nationals for multiple reasons (already in SX mode, riders were ready to go, wouldn’t cause contract issues). That news put everyone at ease on Thursday, even after the Dirt Diggers North Motorcycle Club announced that they were forced to cancel the 2020 Hangtown Motocross and MX Sports stated they would announce an amended schedule on Friday, which will start in June and consist of 11 rounds.

So, to say that I was floored when a friend told me that Feld Entertainment laid off a reported 90-percent of its staff on Friday morning would be an understatement. A massive company with thousands of employees that work on Supercross, Monster Jam, Disney On Ice, and other properties, it had to be a decision that was not made suddenly and one that will have a massive impact on our sport as a whole. I firmly and fully believe that many of those employees will be back to work once the COVID-19 crisis runs its course, but for now, it puts the probability of the remaining races into question.

As of this afternoon, I have been told to expect a full statement from Feld Entertainment and the AMA to come at some point this week. What that message will consist of is still unclear, but I’ve heard that the plan could be to run the remaining Supercross races after the Nationals are done. Now, as we’ve seen over the last two weeks, all of that could change at a moment’s notice and even after I push publish on any post related to upcoming events, there’s a thought that we’ll have to go back and change it at some time, just because the timeline of how the crisis will impact the United States has stretched out further than initially anticipated.

The hiatus has raised so many questions and provided very little information. “Does this make Eli/Dylan/Chase the winners of their classes? What’s the precedent for awarding a title in a shortened season? Is there a certain amount of races that have to be run to fulfill a championship?” From everything we’ve gathered, there’s no clear answer to any of that, so one can hope that this week’s announcement clarifies many, if not all, of the concerns.

We’re still here and still working like nothing is amiss in this impromptu offseason. There will be plenty to enjoy while you sit home and practice safe social distancing techniques, and we hope that our content offers a break from COVID concerns, if only for a moment.

Stay safe and take care of each other out there. It’ll be time to load up and go back to the track soon…