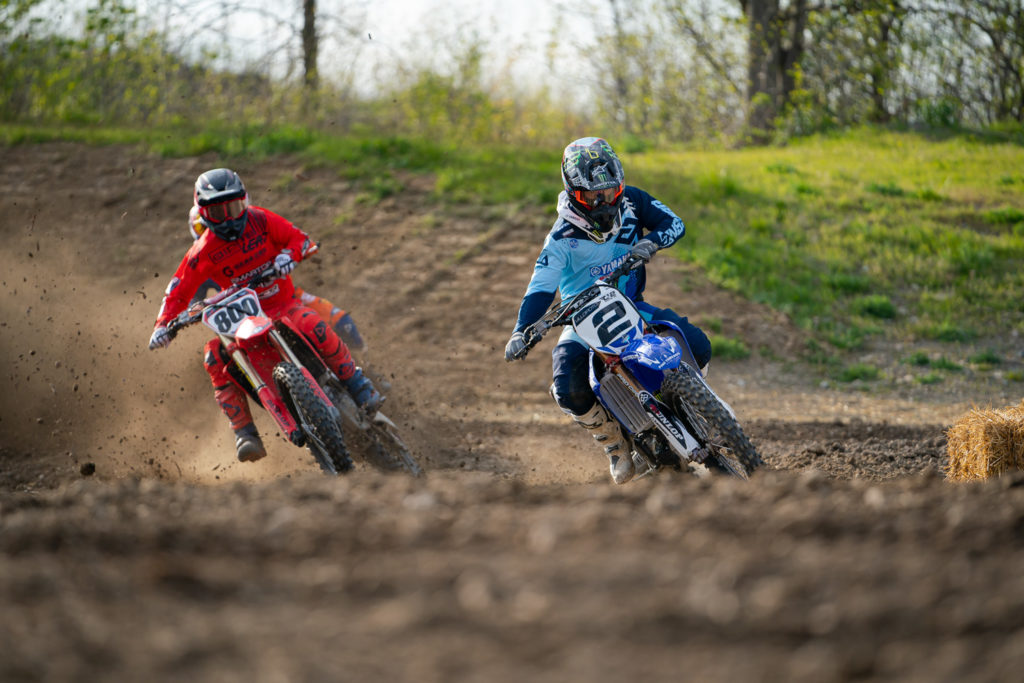 And that’s a wrap on the inaugural Moto Fite Klub. On Tuesday afternoon, a handful of the fastest riders to ever swing a leg over a dirt bike got together at a top-secret location in eastern Ohio (yes, it was Youngstown MX) and went at it in a head-to-head bracket battle for bragging rights, a trophy belt, and the opportunity to bring some much needed good to the world during the current health crisis and money raised for charities of their choice. Although it didn’t have the glitz and glamour of the pro racing scene we’re always so focused on, it was a top-notch production with the vibe of a reunion and plenty of two-wheel talent.

Which pairing that was most exciting largely depended on your preferred era of racing. Were you one of the many that got to see Broc Glover’s incredibly consistent career up close? Did you lose friends over the Bradshaw-Stanton rivalry? How many times did you replay the Pastrana-Windham Heat Race action from the early 2000s? Do you ever daydream about seeing Alessi and Villopoto reigniting their amateur racing rivalry? No matter what you thought was best, the Moto Fite Klub card had something for you to watch and cheer for.

Monday night’s fireside chat between the competitors really upped the excitement for Tuesday’s motos, because the group was able to share their respect for one another’s accomplishments while still throwing a little bit of attitude about how much better they were than the others. After an hour of back and forth, plus a wrestling match, it was clear that Tuesday was going to be a straight-up race.

The event started with Broc Glover and Travis Pastrana, two riders from completely different backgrounds and with various accolades to their resumes. When the concept of the race was pitched, former 500cc ace Glover said that he’d only race Pastrana if the motocrosser-freestyler-rally driver was aboard the RMZilla 500. The MX Wonderboy agreed to the MX Goldenboy’s demands, but by race day, the two decided that it’d be much more entertaining to see Pastrana aboard a Yamaha from Glover’s era. The two exchanged their share of passes, with Pastrana coming out ahead in the best of three series.

Pastrana found tough competition in close friend Kevin Windham, as the two former teammates were paired up in the second round of action. Windham got around the track with his effortless style and impressive speed, while Pastrana rode like a wild man to stay on the rear fender of the Honda rider. In the end, Windham won two of the sprints and advanced on to the next round while Pastrana waited for redemption in the Wild Card round.

Although we can’t recall any intense old motos between Jake Weimer and Ryan Sipes, the two accomplished 250cc riders were a solid pairing in the first round of action. Sipes, who is still an active racer in his mission to be the most well-rounded two-wheel off-road rider, bested Weimer in the motos, but it wasn’t from a lack of trying on Weimer’s part. In their first race, Weimer nearly weeded himself while going through the uphill rollers and wisely backed it down, which allowed Sipes the chance to get by and take the wins.

Jeff Stanton and Damon Bradshaw’s early 90s rivalry is something many fans still talk about, and for good reason. Stanton’s hard-working, no-nonsense attitude was quite different than Bradshaw’s brashness and aggressive riding style, but the two have nothing but respect for the other now. Seeing them on the track, Stanton on a Honda CR250R and Bradshaw on a Yamaha YZ450F, decades later was a thrill and it was obvious that neither had forgotten the fast (or stylish) way to get around the track. Stanton’s two-stroke was at a bit of a disadvantage on the soft, fast course and although he did everything to keep Bradshaw honest, it was no match for the powerful four-stroke.

There was something extra special about the Mike Alessi-Ryan Villopoto pairing in round one. The two had their share of run-ins during their amateur days, but the story changed when they went through their pro careers. That they were back on the bike brands of their youth, Alessi on a Honda and Villopoto on a Yamaha, added to the intrigue. Alessi was certainly faster in the first round, as he claimed the wins and advanced on, thanks to his always solid starts and the way he controlled the lines around the track, while Villopoto was given the chance to redeem himself later on in the Wild Card round.

The motos in the middle of the bracket were good, if not a bit uneven. Bradshaw fell victim to Alessi and Windham lost out to Sipes, which confirmed the 800 and 264 would be part of the Final round, but the real fun was in the Wild Card battle. Villopoto, Windham, and Bradshaw lined up for a quick duel that would determine the last spot on the three-man gate, and you could tell that all three guys wanted their chance for redemption. Bradshaw had the advantage early, but Villopoto soon worked his way around the Beast and took the win, which put him in the Final.

Although sets of one-lap sprints determined the early rounds, the race duration was changed for the Final. Instead, riders would have one three-lap Moto to figure out the results and the old tricks began before the gate dropped, literally. Villopoto snagged the holeshot over Alessi, something no one saw coming but something RV later said happened because he saw the starter’s foot flinch before the gate dropped, and took off with the early lead. Alessi, determined to keep his streak of wins going (he was undefeated in the qualifying rounds) hustled to close the gap built by RV, made a pass, and pulled away to score the big win over Villopoto and Sipes.

The first-ever Moto Fite Klub was a massive success by any measure and it’s very likely there will be more races run under this moniker in the future. What’d you think of the format and outcome? Drop a comment below, after you browse through the photos.