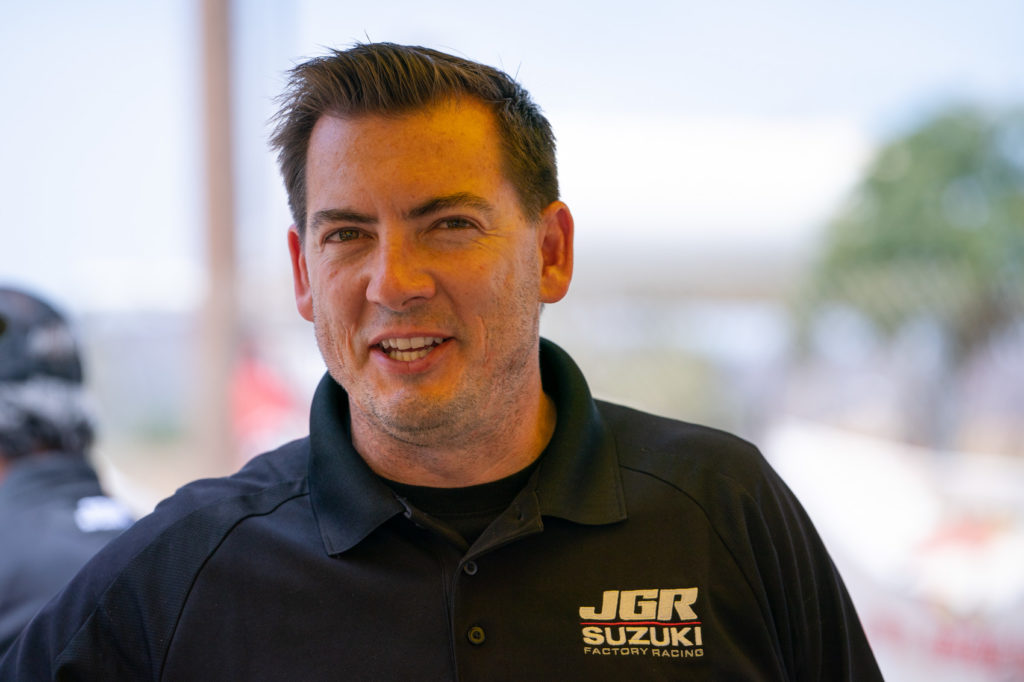 Today during the media introduction for the JGRMX-Suzuki performance packages, I spent a few minutes with Chris Wheeler reminiscing about his days as a professional racer. Wheeler has done damn near everything in motocross, from racing around the world to pre-production motorcycle testing to his current management gig for Suzuki’s racing programs, so he had plenty of things to talk about. Anyone that’s spent some time on two-wheels has stories to share, so I asked him for the first memorable thing that came to mind. Without missing a beat, he recounted the time that he and Andy Harrington were persuaded to race a one-off Supercross deep in Mexico and I started my recorder.

Everyone in moto has some sort of wild story that they like to share, so if the reception is right, this could become a regular feature for our site. Let us know in the comments what you think and we’ll come up with a list of possible candidates to hear from…

During the 2000 Supercross season, I think it was in San Diego, a guy came to our pit area and he introduced himself as a promoter that hosted races in Mexico. He had a Supercross that he wanted to get some guys to go down to do. So fast-forward to the end of the outdoors and he called again, so Andy Harrington and I decided to go. We lived in San Diego, so we were already close to the border and the promoter agreed to drive. I think it was a 10-hour drive, but we didn’t go down through Tijuana, we went across somewhere in Arizona. I had started to get sick before the trip, but we still decided to go.

When we crossed the border, we had to sign our bikes in. The guy had a step-side Ford pick-up truck that was pristine, it was his baby. We signed the paperwork, which basically said that we could take the bikes into the country for however many days it was and started the drive down there. I was getting sicker and sicker, so we got way down there and ended up stopping. The guy said he knew what to do, so he took us to a farmacia and they gave him a thing of penicillin and some needles, then we walked across to the doctor. The doctor gave me the shot in the butt, but the room had a dirt floor and everything. I don’t know what I was thinking (Laughs). So that was the start of it, but I was so sick and I needed something.

We finally got to the town and hotel near where the race was. Before we started the trip the promoter told us to bring all of our old gear because he wanted to buy it off of us to sell down there. We sold him a bag full of gear for a few hundred bucks, then woke up the next day to see everyone running around in “Wheeler” and “Harrington” gear.

Andy and I just didn’t want to get hurt, so we made a deal to split the purse and go 1-2 in each race, then leave. There was a local guy that was pretty good and Andy’s bike started to let go, so he had to nurse it to the finish line and blocked the guy from passing so we could get the money.

That night when it was time to pay us, we thought we were going to get robbed. They wouldn’t give us the money until we went into a hotel room, so we started to get nervous, but they finally paid us out. We wanted to get out of there, but the promoter wanted to stay and party. We got up first thing in the morning and started the drive home, but after we got on the road, traffic was stopped. It was a two-lane road, one lane going each way, and it was just stopped. I was driving the guy’s truck because he didn’t want to leave and was whining, so I offered to drive the whole way just so we could leave.

When we were sitting there I looked out of the side window, saw a guy a few cars ahead got out of his car, and then drug a dead body out of the middle of the road. That’s what was blocking the road and why traffic was stopped. He got it out of the road and I started thinking, “Let’s go, now!” It was a long drive and we were a full day into the drive when the sun started to go down.

We came up to a checkpoint and I swear it was kids that were 16 years old with full AK-47 guns. I pulled over, the promoter was in the passenger seat, and Andy was in back. They started to talk in Spanish, so I didn’t know what they were saying until the promoter said, “You need to pull over there.” We were already under a spotlight, but he told me to pull over to the side of the road where it was dark. At that point, I was just thinking, “Uh-oh.” I was 22 or 23 years old at the time, so I was naive and hadn’t experienced a lot of that stuff.

When we pulled over to the side, I had to pay the guys off. He looked at the paperwork and said that the dates were wrong and that he would have to keep the motorcycles. I didn’t understand what was wrong because even though I don’t read Spanish, I knew the dates were written down. He wanted to get paid off, so I paid him a few hundred bucks and started the drive again.

Mind you, I raced the night before, got up super early, and had down the whole drive to this point because Andy was getting sick at this point and the other guy didn’t want to do it. He basically said, “If you want to get home, then you drive the whole way.” By this point it was nighttime and really dark, so I was going until all of a sudden there was a detour sign. I just plowed right through it, I didn’t even see it. We’re still in Mexico at that point, because the drive was a two-day trip. The road lights weren’t very good where we were, so I cleaned the sign out. What had happened was that the road had washed away, so I hit that part of the road doing like 60 miles per hour. The bikes and everything were in the back and we caught air, so stuff flew out and it was a mess. The guy was yelling at me that I wasn’t paying attention, so he drove the rest of the way home.

There were multiple times in the trip when I thought, “This is it. Either I’m getting robbed or getting stranded here or they are taking our bikes.” Needless to say, we never went back.