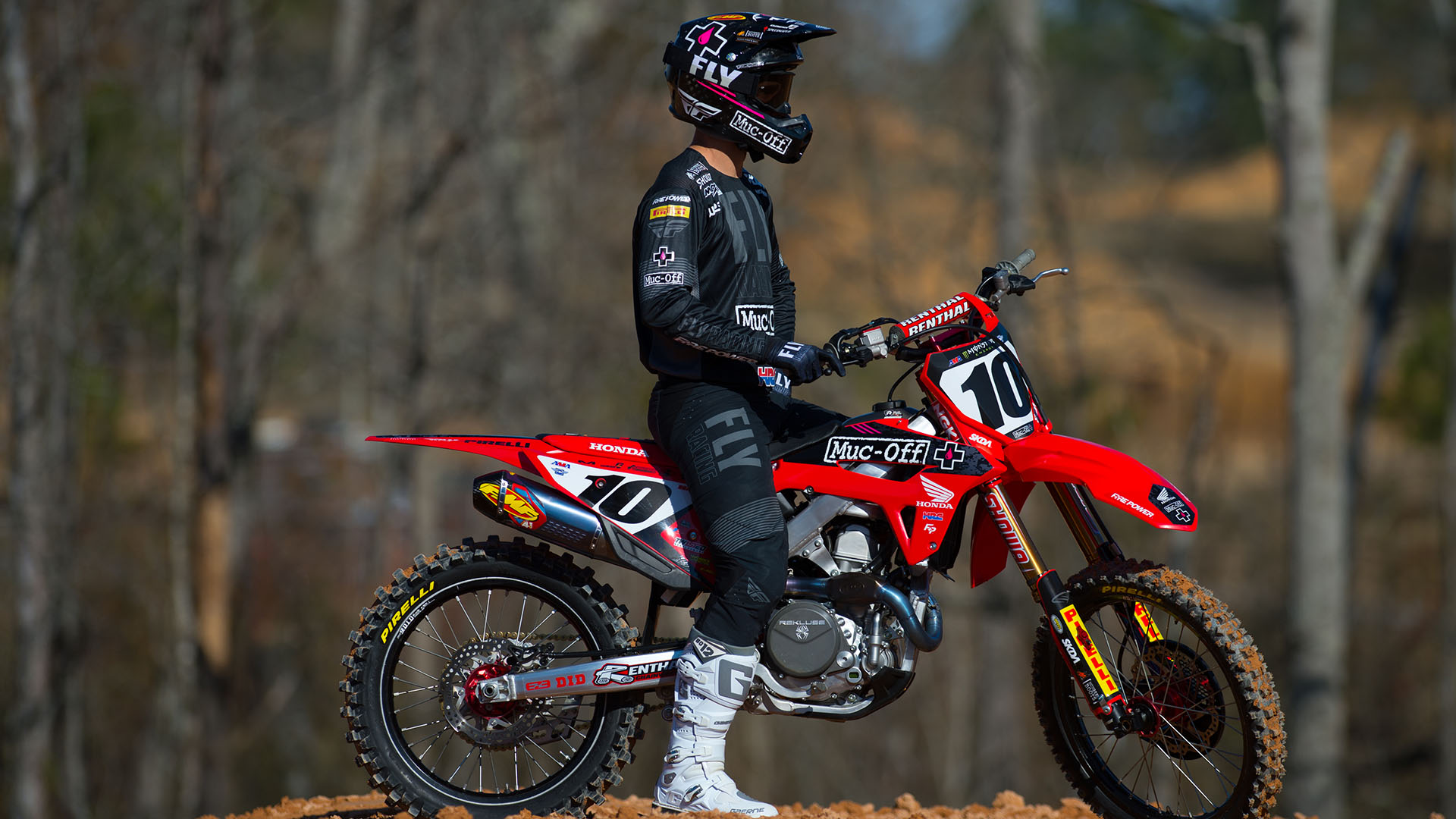 At last, all of the details for Yarrive Konsky’s team have been announced. The Honda Racing Australia-supported squad will return to the United States and contest the 2021 Monster Energy Supercross Series with Muc-Off as the marquee sponsor and Justin Brayton, Mitchell Oldenburg, and Mitchell Harrison on the rider roster. This will be the Australian-US team’s second year in US SX (known as Penrite Honda in 2020), and the expanded lineup plans for one 450 Class rider and two 250 Class riders.

Getting Muc-Off to sign on as the title sponsor is the biggest part of the 2021 plan. This comes just as Australian oil company Penrite shifted their future marketing efforts and has stepped away from a lengthy relationship with the Honda team. With this new agreement, the US division of the team will now be known as Muc-Off Honda.

Justin Brayton and team owner Yarrive Konsky have claimed four consecutive titles in the Australian Supercross series together, a partnership that has helped Brayton extended his career and earned Konsky increased support from Honda’s racing division Down Under. Well into his 30s, Brayton has earned Honda’s support for his Supercross-only schedule in the US SX and Aus SX championships, plus select European events. The planned departure from Team Honda HRC after the 2020 season did little to curb his interest in racing. In fact, it allowed him to commit to a multi-year international program with Konsky.

Mitchell Oldenburg has become the core of the team’s 250 Class efforts by racing in Australia and the United States. He came up just short of winning Australia’s SX2 title in 2019 but advanced the United States program with solid finishes in the 250 West Coast region. The cancellation of Australia’s 2020 race season gave Oldenburg the chance to recover from a significant knee injury and focus on the upcoming 2021 race season. In a recent Swapmoto Podcast, Oldenburg explained that he will race the 250 East Coast region and select rounds of the 450 Class.

Mitchell Harrison joining the team was another part of the Christmas Eve announcement. The journeyman racer has bounced around over the last few years, first as an MX2 rider with BUD Racing Kawasaki in Europe and then as a fill-in for Monster Energy/Pro Circuit/Kawasaki this past summer. Harrison had been spotted at tracks around Southern California on the team’s bikes in recent weeks but, until now, said nothing publicly about the new deal. He will be the 250 West Coast region rider.

Below is the complete press release, including quotes from the team management and Muc-Off.

Konsky Motorsport Group are pleased to announce Muc-Off, the global leaders in motorcycle care and maintenance, as their new title sponsor for 2021.

Muc-Off Honda, run by Australian Yarrive Konsky, will be competing in the premier division of the US world championship: Monster Energy AMA Supercross as well as select European rounds during 2021.

Muc-Off will be supplying the team, including both riders and mechanics, with a full supply of their innovative motorcycle products from their Clean, Protect and Lube systems. This includes the renowned pink Nano Tech Bike Cleaner; the flagship product that launched the brand back in 1994. Muc-Off will also be working with the team to develop new off road products to help them drive their competitive edge further on the track

Heading up the team is four times Australian SX champion and Daytona Supercross Winner veteran Justin Brayton. who will compete in the 450SX class on the new 2021 CRF 450R.

Brayton is considered to be the most consistent rider in the prolific series, finishing inside the top 10 twelve times during the 2020 season. 2021 marks Brayton’s 18th year as a professional motocross/supercross racer. In 2018 he achieved a career best where he won the main event in Daytona onboard a CRF 450R and in 2012 he had his best overall championship finish – 4th.

Mitchell Oldenburg will also be returning to the team in 2021 where he will be riding the CRF 250 alongside new teammate Mitchell Harrison. Harrison returns to the American Supercross Championship after a brief stint racing in the FIM World Motocross championship in the MX2 class.

The Supercross season gets underway at the NRG Stadium in Houston Texas on the 16th January 2021. This will be the first of three races in Houston.

Yarrive Konsky Team Owner: “I am really pleased that we can finally shout about our plans for 2021. It has been 4 months in the making, with a final push at the 11th hour to get to this point, but now we are here, I am keen to start seeing results. Working with Muc-Off as our new title sponsor for next year has been really refreshing. Their ethos and work ethic has been instrumental in getting us here and I am looking forward to seeing this relationship develop.”

Justin Brayton 450SX: “It’s super exciting to be working closely with Yarrive again for 2021, especially with him bringing an exciting new brand to the table. His passion and enthusiasm for this sport has been a positive influence on me. We have seen a lot of success in Australia, so I hope to relive this in the U.S supercross this year. I have been riding the new 2021 CRF 450R and I am feeling comfortable on it, testing has been great so now I just need to put it all together and focus on a strong and consistent season.”

Mitchell Oldenburg 250SX:” This is my third season with Yarrive and Honda and I feeling more ready than ever to go racing. Riding the same bike for a third season is an advantage as I am feeling so comfortable with the bike and I feel at home with the team. With Muc-Off as the new title sponsor, it has given me the motivation to show the world what I have got!”

Mitchell Harrison 250SX: “When I got the call up to race for Muc-Off Honda, I was excited as I have only good things about their program. I went out to test the bike and immediately asked for the contract as it just felt right. The team is competitive and because of both Muc-Off and Honda coming in to support the team for 2021, I am committed to getting top results.”

Alex Trimnell Muc-Off CEO: “When I started the company; it was a dream of mine to be working at the pinnacle levels of motorsport so I am pumped that we are at the point where we can be title sponsors of an exciting Supercross team in such a dynamic and globally admired series. We look forward to working with the Muc-Off Honda team in developing new and exciting products, as well as supporting them in their mission to be a leading player in the sport. To see the brand with so much presence at this level of racing, makes me very and this I know is shared throughout the whole team at Muc-Off

Brandon Wilson American Honda: We are very happy to keep Justin in the Honda family racing the all-new 2021 CRF450R. He was a fantastic teammate to Ken last year, and we are excited to see what 2021 will bring. 2021 marks the second year the team will be competing in America and we look forward to working with them.

2022 Justin Brayton Shootout This Weekend In Iowa
Michael Antonovich May 9, 2022