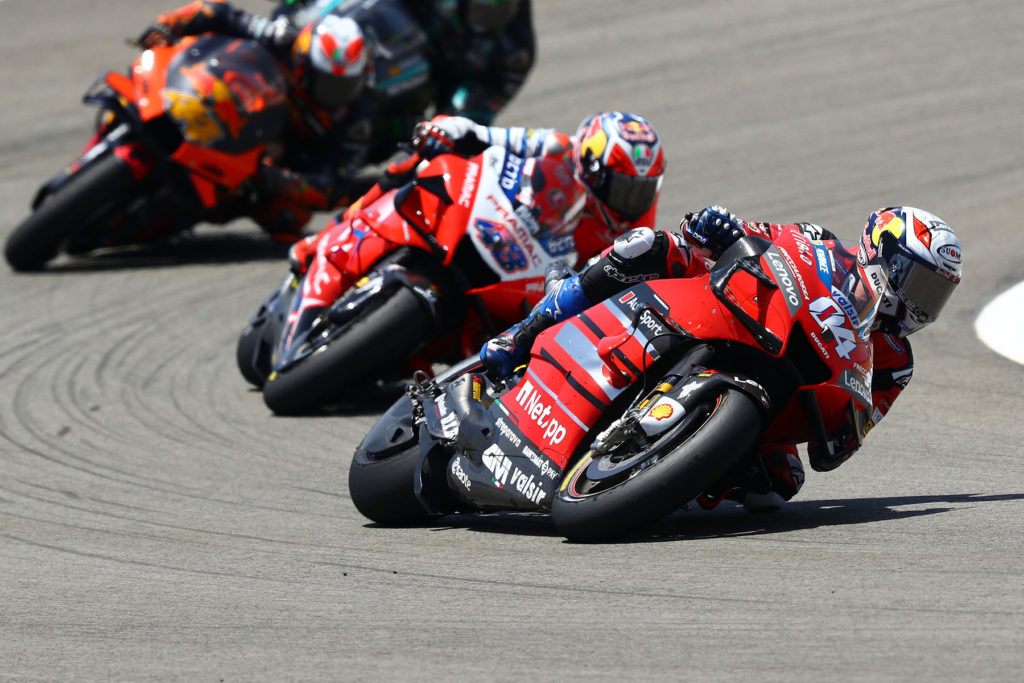 A globe-trotting tour, one of a kind race bikes worth unthinkable amounts of money, throngs of fans that cheer every move, and lucrative contracts with some of the biggest brands in the world. There’s no denying that MotoGP is the premier motorcycle racing championship in the world and we were excited to watch the 2020 season kick-off over the weekend with a thrilling day of action in Spain. But when riders are away from the glitz and glamor of the paddock, almost all of them swap their leather suits for their motocross gear and practice laps at jump-laden tracks. Yeah, the strict rules that are in place and limit teams from practicing is a factor, but nearly every MotoGP competitor will tell you that they have just as much fun riding a modest 450cc motocross bike as they do their high-horsepower, technically advanced 1000cc race bikes. That’s certainly the case for Andrea Dovizioso and Jack Miller, two Ducati racers that are backed by energy drink giant Red Bull.

For Dovizioso, motocross can be a good and bad thing. In a “normal year” the Italian will come to the United States, rent a house in Southern California, and spin laps at tracks like Cahuilla Creek, Milestone (RIP), Perris, Glen Helen, and the like. Having Alpinestars as a sponsor takes some of the burdens off and they give him one of their signature red Tundra pick-up trucks to haul everything around for the working vacation, which is documented in his video below. But this year Dovi had to stay in Europe, where riding was restricted until just recently, and he spent as much time as possible at the tracks around Italy. All was going well until an unfortunate crash a few weeks ago left him with a broken collarbone and put the last push of preseason training in peril. A routine surgery to plate the fracture helped expedite the recovery process and over the weekend, he raced to a solid third-place finish in Jerez.

Miller is equally consumed with motocross. The Australian is close friends with a number of people in the industry, has a hook up on gear from Fox Racing, and gets in as many motos as he can between rounds of road racing. Miller’s skills on an MX bike are impressive, even against an off-road icon like Toby Price. Their Red Bull video is a grudge match of sorts at a local track Down Under and it’s cool to see the MotoGP star go at it against the Dakar Rally winner. If you’re just coming around to the MotoGP scene, keep an eye on Miller in 2020 and beyond. He was signed to a highly coveted spot on the factory Ducati Corse team after years of solid finishes with the Pramac satellite squad, a deal that will start in 2021.