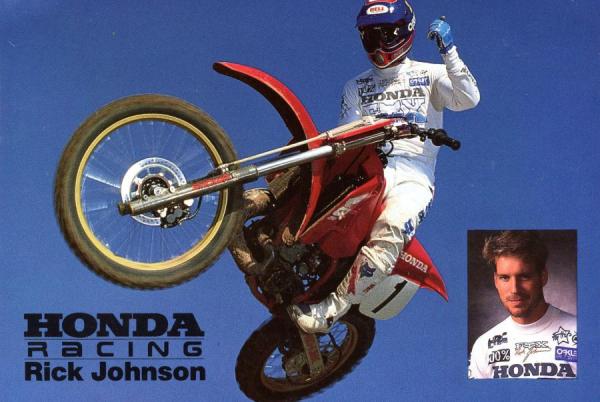 Seven-time Motocross and Supercross Champion Ricky Johnson is not only a legend in our sport, but he also remains one of the. coolest and most down-to-earth guys on two wheels. During RJ’s heyday in the 1980s, the internet, and social media were the stuff science fiction movies were made of, so behind-the-scenes stories were few and far between. Having had Johnson on the SML Show previously, we know that he’s got a virtually endless supply of memories from his racing days, so we asked him to share some insight with us about this old Team Honda autograph poster.

“If you paid attention to my career, you’d have noticed that I didn’t wear the same gear all the time. I wore a bunch of kits and I tried not to mix and match, but since kids see what you’re wearing and go, “I want that blue gear, dad,” or, “I want that orange gear, dad.” So I would mix it up and showcase as many different sets of gear that I could. Even at a race, I would wear different stuff for the first part and the second part. That’s how I know what was what by looking at old photos! (Laughs).

“Looking back at this old autograph stock, the first thing that I think is that the beard was a mistake, all right? I would grow a beard when I would go to Europe in the offseason. It was pretty bad. It was kind of shabby. I’m not a big bearded guy. I don’t know why Honda didn’t say, “You know what? Could you shave the beard?” They just let me run it. It was weird how much freedom everyone gave me, even though some of the stuff I would do was stupid.

“Anyway, it kind of backfired on me. So we were trying to get me with an agency that was representing Michael Jordan and a bunch of different people, I forget, some big sports agency, to try to get me Coca-Cola and Gatorade gigs. Anyhow, they saw that picture, because Honda decided to use that photo on my autograph posters. The agency people looked at it and they said, “Well he’s not really our type. He’s too grungy. He’s like a Harley rider because he’s got a beard, long hair.” And heard that and was like, “What? Harley guy?” So yeah, that kind of screwed me a little bit. (Laughs)

“The cool thing about that action photo is that I’m wearing the white gear with the gray and the light blue. That’s when the trends changed and the gear didn’t have to perfectly color match the bike, and gear started to come without manufacturer logos on it. Of course, that was the genius of Pete Fox. Suddenly, you could have Honda-colored gear that a Kawasaki and a Yamaha guy could wear. Do you know what I mean?

“This was also the 1988 CR250R, which was radically different than the 1985 and ’86 bike that I loved. I liked that new bike in the sand and on tacky conditions, but it didn’t have a lot of weight on the nose, so I struggled on slick Supercross surfaces. It washed the front quite a bit, so I struggled with that some, but the thing was so fast. The motor was so strong.Even though I was 185 pounds, I could just rip holeshots all day long because it had power for days. Still to this day, it gives me goosebumps thinking about when I first rode it. I’m thought, ‘Oh my God, this thing doesn’t even throw you. It feels like an electric motor. It’s not vibrating! Good times, man!”