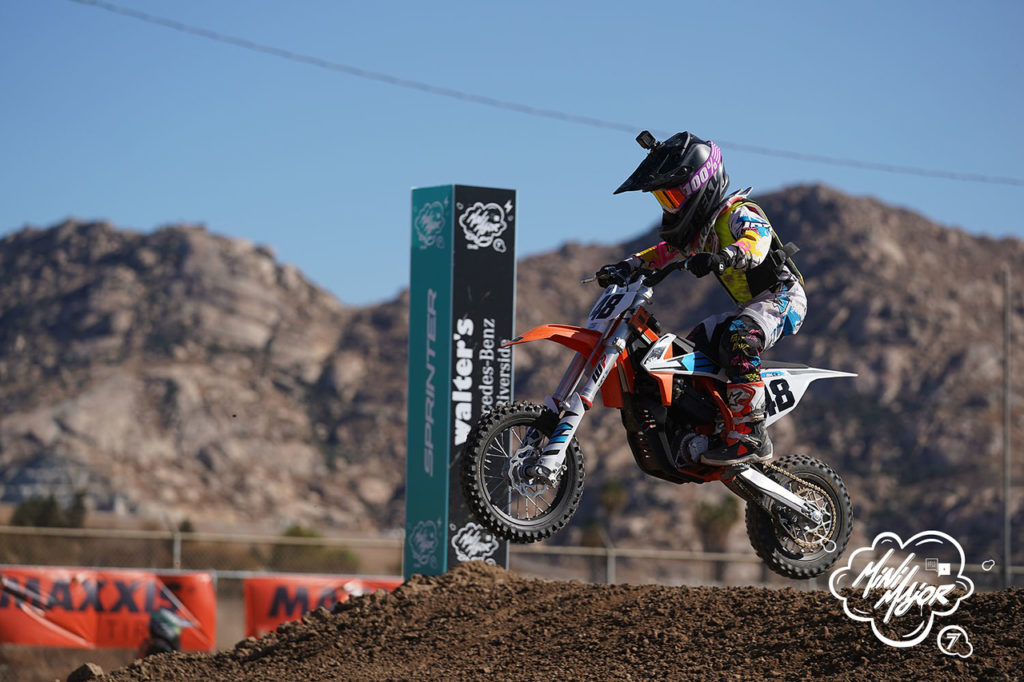 KTM has always done things differently than the rest of the world’s motorcycle manufacturers. From the linkless rear suspension systems that hampered the brand’s motocross bikes in the 90s and early 2000s, to the 13mm bolts and single-sided airbox design, the Austrian brand can never be accused of being a “me too” manufacturer. Leading the way with innovations like electric start, hydraulic clutch and even lock-on grips, there are plenty of reasons that the orange machines stand out from the rest, and we’ve not even begun to discuss the brand continuing to further develop its insanely popular line of two-stroke motocross and off-road motorcycles while most other brands have abandoned them all together.

And now there is the KTM SX-E 5 electric minibike. Alta Motors set the industry on its ear with the revoutionary Redshift MX bike, but alas, the manufacturer eventually closed its doors due to financial woes. While Honda shocked the motocross world earlier this year with a prototype electric motocross of its own, KTM threw its hat into the ring on the complete opposite end of the spectrum with the SX-E 5, which is designed to produce power equivalent to a 50cc mini. 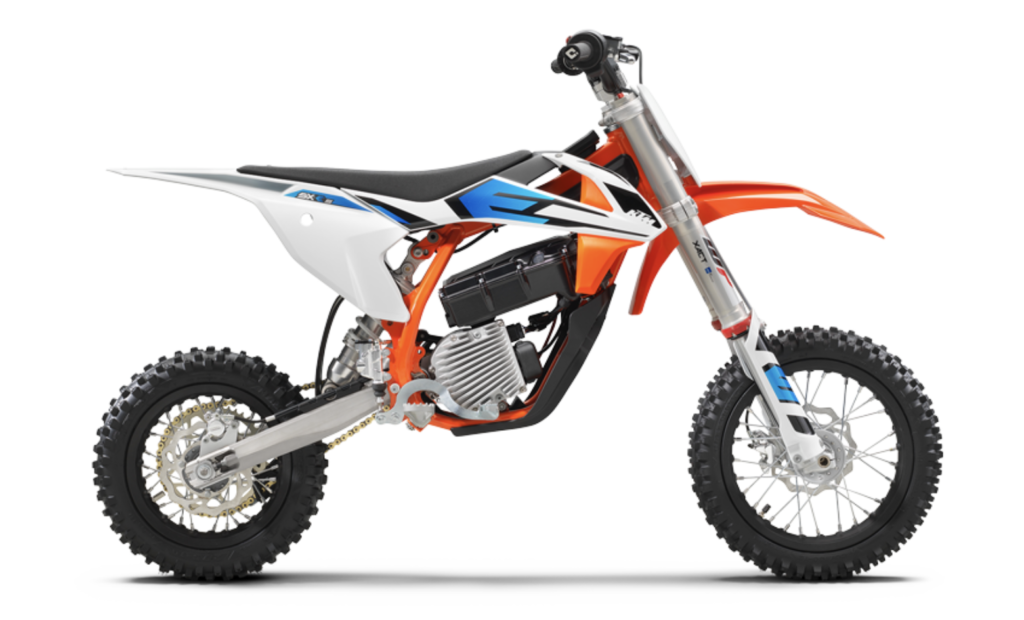 KTM unveiled the SX-E 5 at this year’s running of the Red Bull Straight Rhythm, with several riders doing some demonstration riding on a small track made in the pits. Among them was Krue Morais, son of former Supercrosser and now KTM R&D rider Ryan Morais. Krue played an instrumental role in the development of the SX-E 5, and has more seat time aboard the exciting new bike than anyone else in the world. “He’s actually much quicker on it than his gas-powered 50 SX,” said father Ryan. “I think there was a little learning curve for him, but he’s really learned to control the instant powerband and take advantage of it.”

Before the Seven MX Mini Major, Morais actually asked me if he could have Krue race in one or two of the 50cc classes. Though the bike has yet to be homologated by the AMA, I replied that it would be no problem as he got the “swap exemption.” As it turned out, the Morais family was unable to attend due to a scheduling conflict after all.

A couple of days before the Seven MX Mini Major at State Fair MX, I called KTM’s Manager of Media Relations, David O’Connor, and asked if we could get our hands on one of the new minis. He agreed and the day before the Mini Major was set to kick off, I drove to KTM’s Murrieta, California, headquarters and picked up our mini test bike. In the parking lot, I took the bike for a spin and was shocked by its instant pickup, especially in the most aggressive power setting.

The bike is highly adjustable in every sense, and KTM designed the bike to be able to grow with a young rider as they grow in both size and ability. As mentioned before, the SX-E 5 has six different power settings with 1 being so tame it barely seems to move at all, and 6 being aggressive enough to catch a full-grown adult off-guard! Power settings are easily toggled through with a push-button mounted where the gas tank filler cap would normally be. A bright LED display is easy to read and keep track of. To prevent a runaway bike incident in the event of a crash, a kill switch tether is designed to be worn by the rider on their left wrist. Parting ways with the bike in a crash will disconnect the tether and render the bike powerless. Beneath the seat is an identical tethered kill switch. What is this one for? Parents who want to keep inexperienced children from toggling through the power settings unsupervised can remove this one to disable the tank-mounted adjuster. Genius!

Another impressive feature of the SX-E 5 is its size adjustability. Beneath the faux fuel tank is a spacer that can be removed to lower the tank and shroud area several millimeters, and a similar adjustment is available at the subframe mounts. Changing the overall size of the bike from one setting to the next takes only a few minutes, and it allows the minibike to truly grow with its rider. 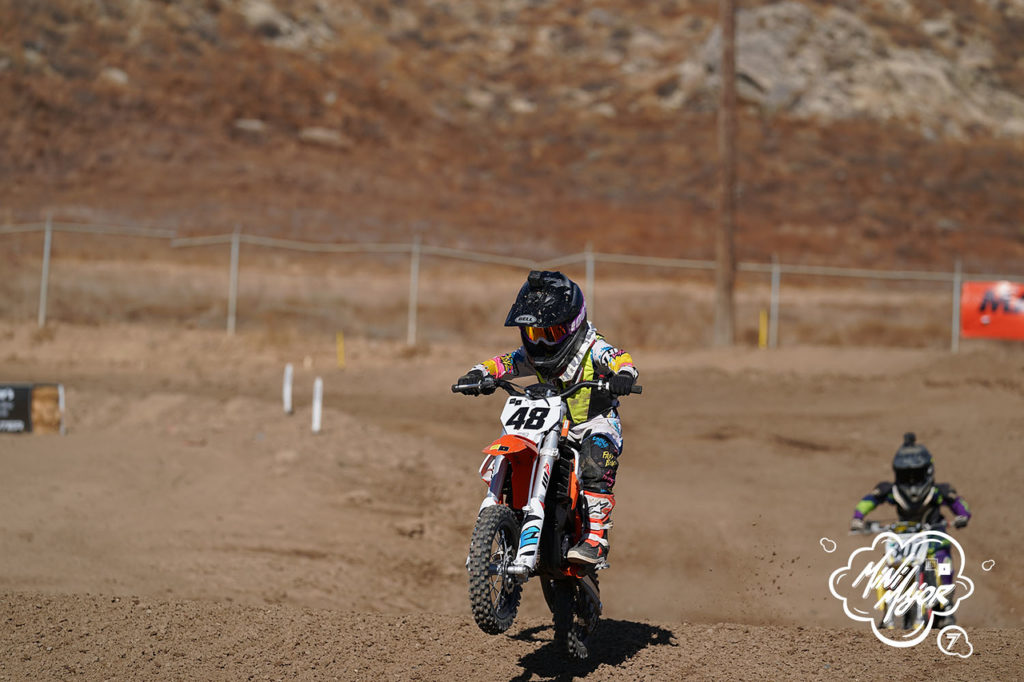 So with a shiny new KTM SX-E 5 in the back of my Toyota of Escondido Tundra, I set the navigation to State Fair MX and started to ponder who I would recruit to test the bike for me. My little buddy Deegan Sugamele came to mind first, mostly because I wanted to have the bike evaluated by a 50 rider who is on the younger side of the age range. Deegan has been virtually unbeatable in the PW50 class at the Swapmoto Race Series, and he also races a Cobra 50 in his age bracket.

As delivered, the SX-E 5 was in its large setting and Deegan struggled to reach the ground. A few minutes was all it took to lower the seat and overall tank height of the SX-E 5, and Deegan was off! Years ago, I struggled to adapt to the instant power delivery of the Alta Redshift and get used to the silent motor, but kids are much more adaptable and Deegan seemed to take to the SX-E 5 instantly. Though the races were hours away, he instantly attacked the BMX pump track in the pit area at State Fair and was having a blast on it in power setting 6 in no time at all. 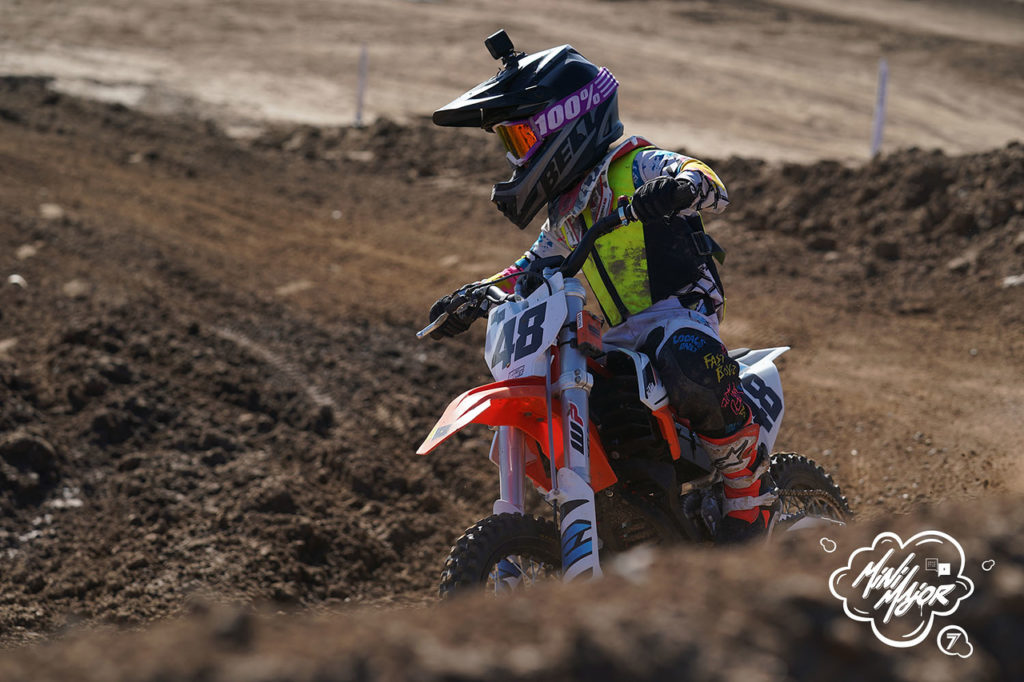 In his race motos, Deegan turned his quickest single lap of the weekend in aboard the SX-E 5; impressive especially because he had virtually no time on the machine before racing it. Though his average lap times were faster on his more-familiar Cobra, the fact that he was quickest at times on the SX-E 5 shows that even though it has no engine noise and vibration, a bike is a bike to a kid who loves to twist a throttle!

KTM claims that the battery can be charged to 100% from a complete drain in 70 minutes, but it seemed to require about two to two-and-a-half hours when plugged into the generator we had at the track. Results may be better when plugged into a permanent power source. How long or how well did the battery last? On power setting 6, the bike lasted through the Mini Major’s 15-minute motos with no problems, but throw in a 10-minute play session on the pump track afterward and the battery was pretty close to dead. 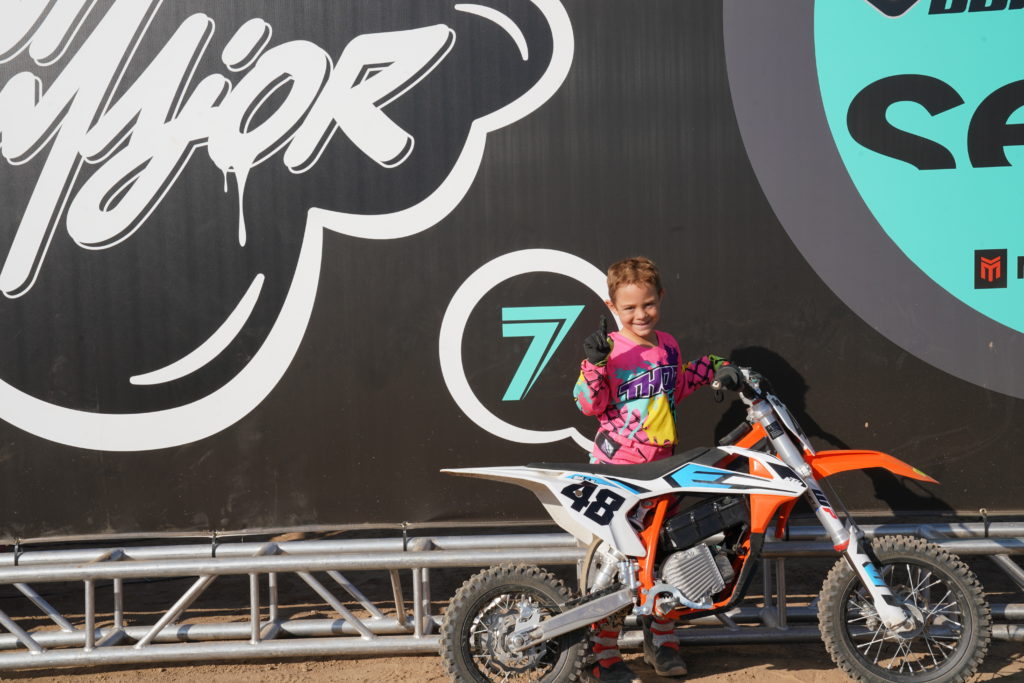 After the Seven MX Mini Major weekend, we asked Deegan a few quick questions and got some short and sweet answers! To the best of our knowledge, he is the first rider to ever race the new KTM SX-E 5 against gas-powered 50s in a sanctioned event!

Was the KTM SX-E 5 hard to get used to because the engine is electric and not gas?

No not at all because I am used to my STACYC bike.

Does the SX-E 5 jump differently than your gas-powered bike?

I could get up to speed quicker so it jumped higher and easier.

How does the bike corner?

Once we set up the suspension it turned better than my gas bike.

Did the SX-E 5 stay fast the whole race or did it start to slow down?

No it kept its speed the whole time.

Does the SX-E 5 feel like a normal dirt bike?

It feels like a giant STACYC! It’s lots of fun and I don’t want to get off it!

So, is the future of motocross electric? It’s hard to say. While it’s hard to imagine nothing but electric motorcycles silently ripping around race tracks, having an electric option in all motorcycle sizes is definitely something we’d like to see. Kudos to KTM for continually pushing the envelope to make the sport that we all love, bigger, better, and…quieter?