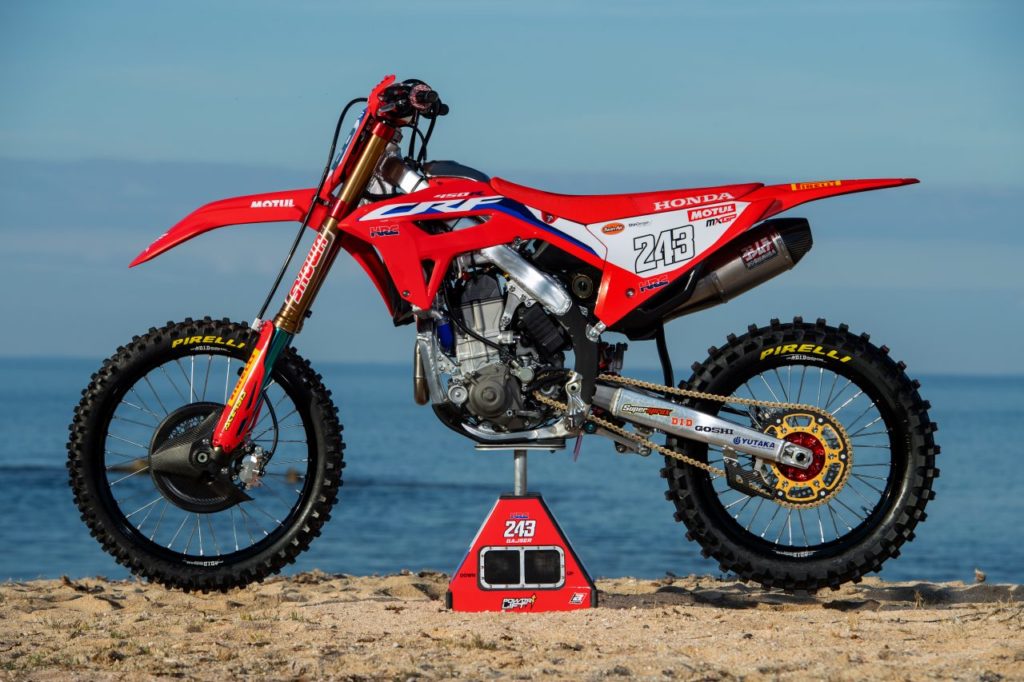 Earlier in the week, we saw clips of Tim Gajser riding a very different looking red bike at a sandy practice track in Sardina, an island near Italy. Though the footage was limited and grainy, it was obvious that the bike was much narrower than the one Gajser raced to the MXGP class championship in 2020. On Thursday, Team HRC MXGP confirmed that they will race the 2020 Monster Energy FIM Motocross World Championship aboard a completely redesigned CRF450RW, and the preseason photo images showcase the bike that Gajser and new teammate Mitch Evans will run in the international championship.

We’ve heard a little about the bike prior to this week, but details are still very scarce. Honda has designed a new chassis and engine, both of which appear to be more narrow and compact (the back half of the bike looks very much like a KTM). To achieve the thin profile, Honda has ditched the dual mufflers that they have become known for in recent years, and it’s now just a simple single-sided exhaust system that comes directly from the center of the engine.

Honda is yet to release any full specifications or design details of the bike, and a large black box covers the fuel injection system, so it’s hard to say exactly they did but we will get more information on the red ride in the next few days.

One last thing worth noting: Honda ended its program in the All Japan MX Nationals, the country’s native series and a popular place for new technology to be tested (that’s where Honda debuted the original CRF line in the early 2000s). For Gajser and Evans to be the first to race the new bike shows the manufacturer is putting their resources into the FIM Motocross World Championship, the only other professional motocross series that allows full works bikes.