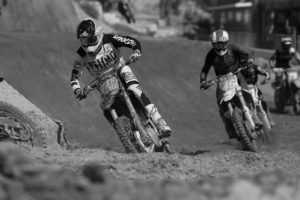 And that’s a wrap! The AMSOIL Terra Firma race series has officially come to an end as round five took place this past weekend at Glen Helen Raceway. The temps rolled into the hundreds after noon, making round five the hottest race of the series. However, the heat didn’t seem to faze anyone, as well over 600 racers filtered through the gates of the popular San Bernardino, CA facility for a day of racing. With the extreme temperatures, the track crew at Glen Helen did their best to keep both tracks watered throughout the race day and provide racers with the best possible course. At the end of the day, the 2021 AMSOIL Terra Firma series saw it’s last checkered flag, but that wasn’t before hundreds of racers battled it out and left it all on the track for wins, podiums, and personal bests. 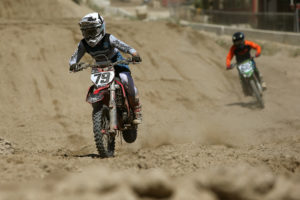 As we touched on, the Terra Firma race series finale saw quite the turnout at Glen Helen Raceway. One of our largest classes at each and every round of the Amsoil Swapmoto series is the Open 85-150F/Supermini class. This again reigned true this past weekend, as over 30-youngsters lined up for battle in the highly competitive class. Kyle Heald took the win in moto one after a picture-perfect start to finish race, as he lead every lap. However, some rough luck cost Kyle in the second moto that landed him outside of the top-10. Race series regular Max Shane took advantage of the situation and took home the overall victory in the supermini class after snagging the second moto win, following his second place finish in moto one. 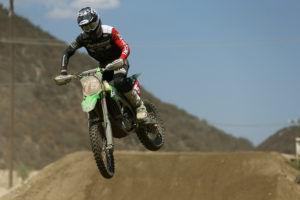 The high temperatures forced the track crew to constantly water the courses, making some slick conditions and ultimately slowing lap-times down a tad. However, the pros seemed as fast as ever, especially our buddy Trevor Stewart. Even after a first lap mistake, Trevor managed to work his way to the front of the pack before the end of the moto and claim the win. There’s no doubt in our minds that Trevor turned the fastest lap times of the day, and his overall wins in both the Pro 450F and Pro Open (125-450) classes favor our thoughts. We’d say Trevor was pretty stoked with his day at the races!