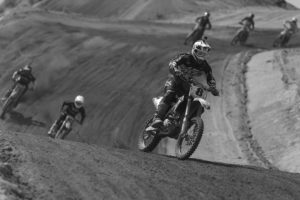 Round two of the AMSOIL Terra Firma series is officially in the books, as racing took place last weekend at LACR. It was another hot one, as temperatures exceeded 100-degrees. However, once again racers didn’t seem to be fazed by the hot Southern California sun, as hundreds of riders filtered through the gates of LACR eager to get behind the gate. The track crew had two perfectly prepped, sandy tracks awaiting racers, and thanks to some frequent watering, both tracks stayed in great shape throughout the day. Thanks to everyone who joined us for round two of the Terra Firma series! We now have about a month off until the third round of the series, however, we hope to see all you youngsters at State Fair MX September 24th – 27th for our 2020 Mini Major!

The pro classes had some familiar faces at round two of the Terra Firma series, as a few racers from our series kickoff faced the heat at a chance to take over the points lead in their class. One of those familiar faces was Dalton Shirey, who swept the Pro Open (125-450) class at round one. As for round two, Dalton was the guy to beat, as he snagged a moto win in each race he lined up for and swept both the Pro 450F and Pro Open (125-450) classes. There’s no doubt he set the fastest lap times of the day, as he managed to get into the lead in each of his motos no matter the position he exited the first turn in. Well done, Dalton! 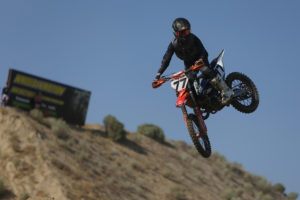 Consistency is key! Cj Benard raced a gruesome six motos at round two of the Terra Firma series, as he lined up in the Intermediate 250F, School Boy (125/250F), and 125cc Open classes aboard his KTM 125SX. When racing three separate classes, the chances of you lining up against different competition is pretty high, and Cj seemed to race a different group of racers in each class. However, his consistency in each of the six motos was quite impressive, as he took home four moto wins, and two-second place finishes. There were a few races where Cj was seen pretty deep in the pack halfway through the motos and his chances at even a top-three result seemed unreasonable, however, he managed to put his head down and charge to those consistent top-2 finishes.

Full race recap, results and more up at SwapmotoLi

This week will be a flood of coverage from this pa

All results are now posted! Please find them at S

All the goods! @aidanzingg taking the top spot in

Make sure you check out the live webcast today of

The @ridestacyc SHRED SESSION kicks off on the kid

Here it is folks! Saturday schedule for the Mini M