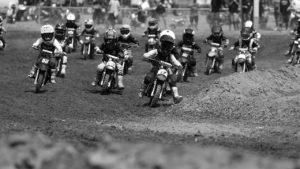 The AMSOIL Swapmoto Race Series rolled back into State Fair MX this past weekend for round four of the Terra Firma series. The sun was out and the temperature was high, however, that didn’t seem to stop our race series regulars, as well over 500 racers filtered through the gates of the Perris, CA facility for a thrilling day of racing. The track crew at State Fair had both tracks prepped and groomed to perfection, providing racers with the best possible race courses. All said, round four of the AMSOIL Terra Firma series was definitely one for the books and we look forward to wrapping up the series in two weeks at Glen Helen Raceway, see you there! 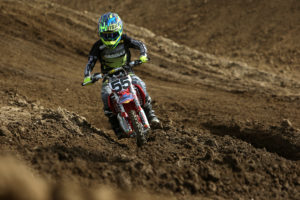 Regular Swapmoto race series attendee Ryder Darrigo made an appearance at round four of the AMSOIL Terra Firma series. Fresh back from Loretta Lynn’s, Ryder seemed to have returned to SoCal with even more speed as he dominated throughout the day at State Fair MX. The Open 65cc (No Beginners) class was as stacked as ever, however, Ryder made easy work of the 15 other racers on track and came out on top in both of his motos. From there, Ryder went on to sweep the 9-11 years 65cc class with another two moto wins, adding to his already successful day of racing. Way to go, buddy! 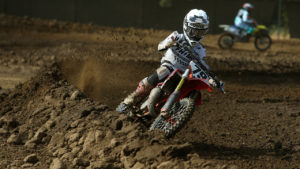 What a day of racing! Round four of the AMSOIL Terra Firma series certainly delivered in the entertainment category, as battles transpired up until the final races of the day. One of the most exciting races for spectators to watch was the Open 85-150F/Supermini motos, as over 20 youngsters lined up to compete. Although it was hard to focus on just one rider, Max Shane was certainly the stand-out performer, as he managed to go 1-1 in the stacked class. However, the wins didn’t stop there, Max went on to grab two more moto wins in the Big Wheel Open 85/150F class.

Overnight parking reservations for Mini Major West by @sevenmx_ will open next week. We will@post a couple day prior to release. We are negotiating for more space on asphalt. ...

What an awesome event this year for the Mini Major East by @sevenmx_ ! We checked off a lot of our goals this year but we still have a list of things that we’re looking forward to making even better. East Coast MX has a great vibe. We are happy to say that we have committed to returning to @monstermountainmxpark in 2022 and we can’t wait to be even bigger and better next year. Thank you to everyone for coming out.
@sevenmx_
@ridestacyc
@ktmusa
@husqvarnamotorcyclesusa
@monstermountainmxpark
@swapmotoraceseries
@swapmotolive
@swapmotolivedotcom
#minimajoreast ...

The quietest start of the day in the Electric Challenge by @husqvarnamotorcyclesusa and @ktmusa ...

It’s trophy day at the Mini Major East by @sevenmx_ !!! Stoke for all the families who came from all over the country to race with us this weekend. Tag us in all your posts and stories as we want to see the race weekend through your eyes. We will re-post.

Good morning @monstermountainmxpark it’s practice day! For all our new followers on the East Coast make sure and keep an eye on our stories for updates throughout the day. Practice schedule starts at 8am. Practice 1 – Supermini / 85/150f / Age Groups