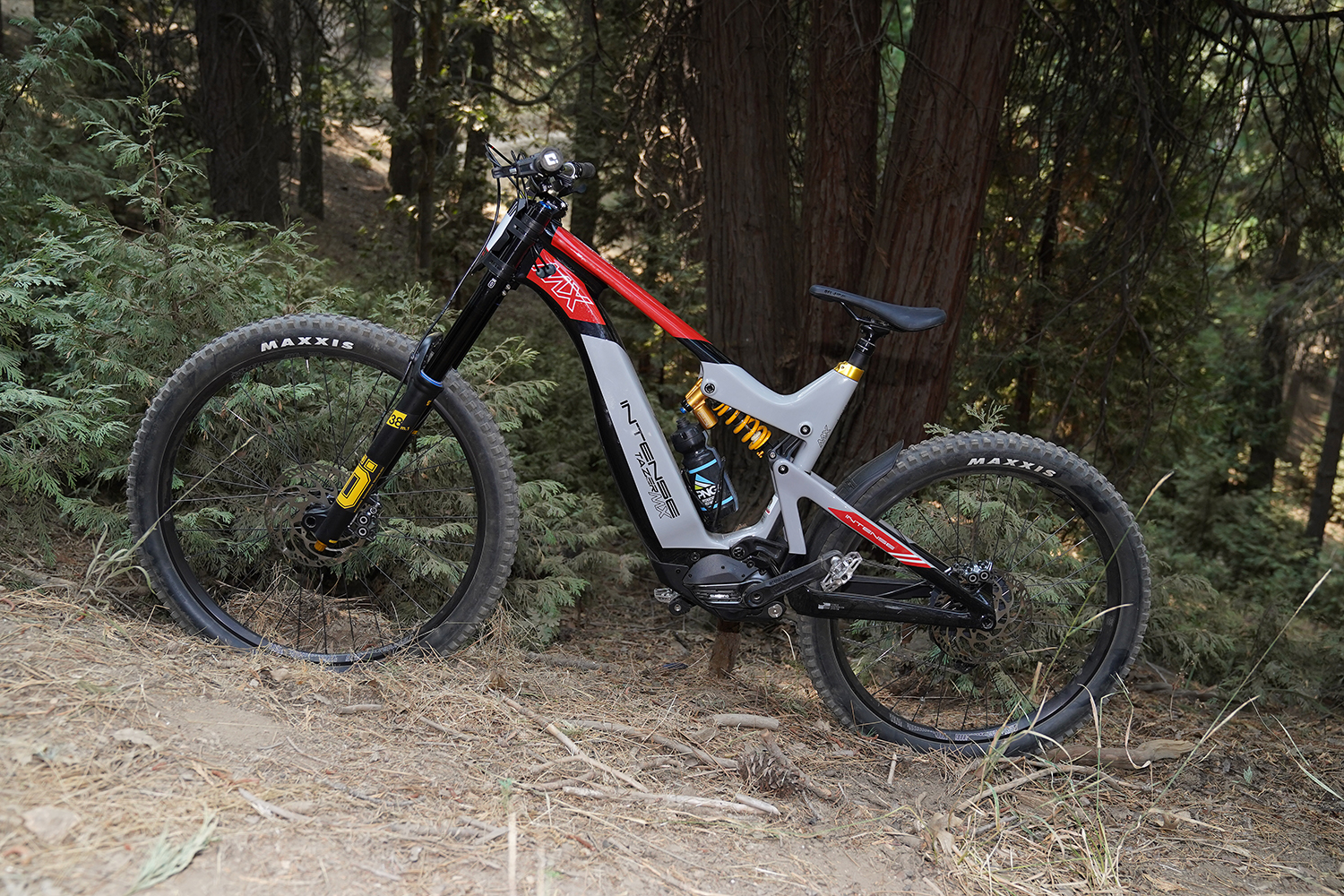 While much of the world is in a state of chaos due to the COVID-19 pandemic, the bicycle industry has been booming! Bike shops everywhere are completely sold out, no matter the price or sector of riding. Intense Cycles has had deep roots in the moto industry from day one and still to this day they are leaning on the motocross market for some outside-the-box thinking. The motocross racer that gets into mountain bikes wants instant gratification. They want to climb the hills with ease and go fast down the hills. The Intense Cycles team has recognized this so they have partnered with Parts Unlimited and developed the Intense Tazer MX, a motocross-themed pedal-assist mountain bike that is available only through motorcycle dealerships. We have spent plenty of time on the standard Intense Tazer so when the Tazer MX was released we were anxious to throw a leg over it. 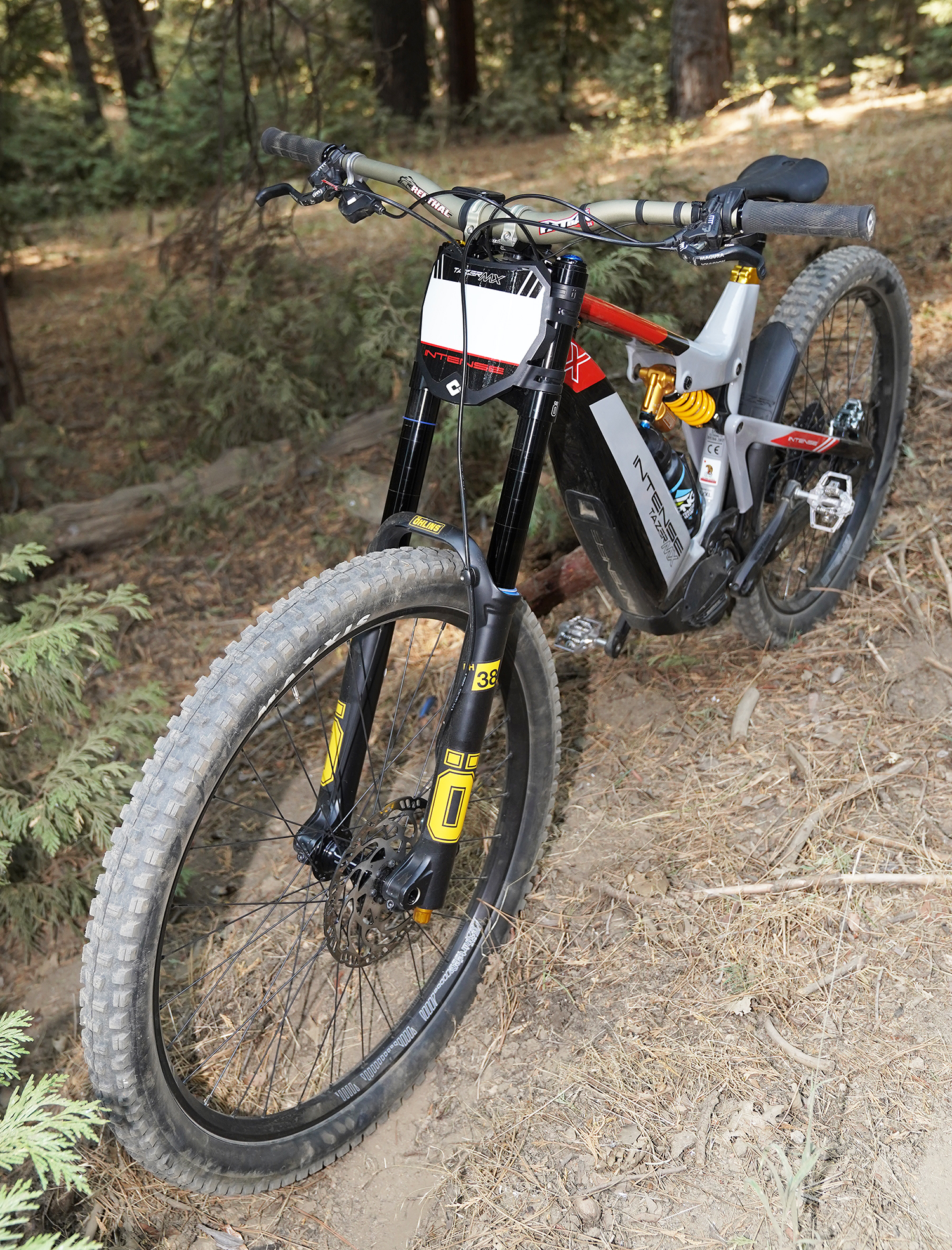 Our first impression of the bike was how great it looks with its dual-crown Ohlins fork and coil shock. The new paint and graphics scheme was made to mimic moto style, an is a nice departure from the original Tazer’s yellow-and-gray design. Motocross brands were utilized wherever they could be on the Tazer MX, so that the bike would be familiar to motocross guys making the switch to eMTBs for the first time: Renthal handlebars, Magura brakes, Maxxis Tires, and Ohlins suspension components. Heck, even the brakes come moto style, with the front on the right and the rear on the left. 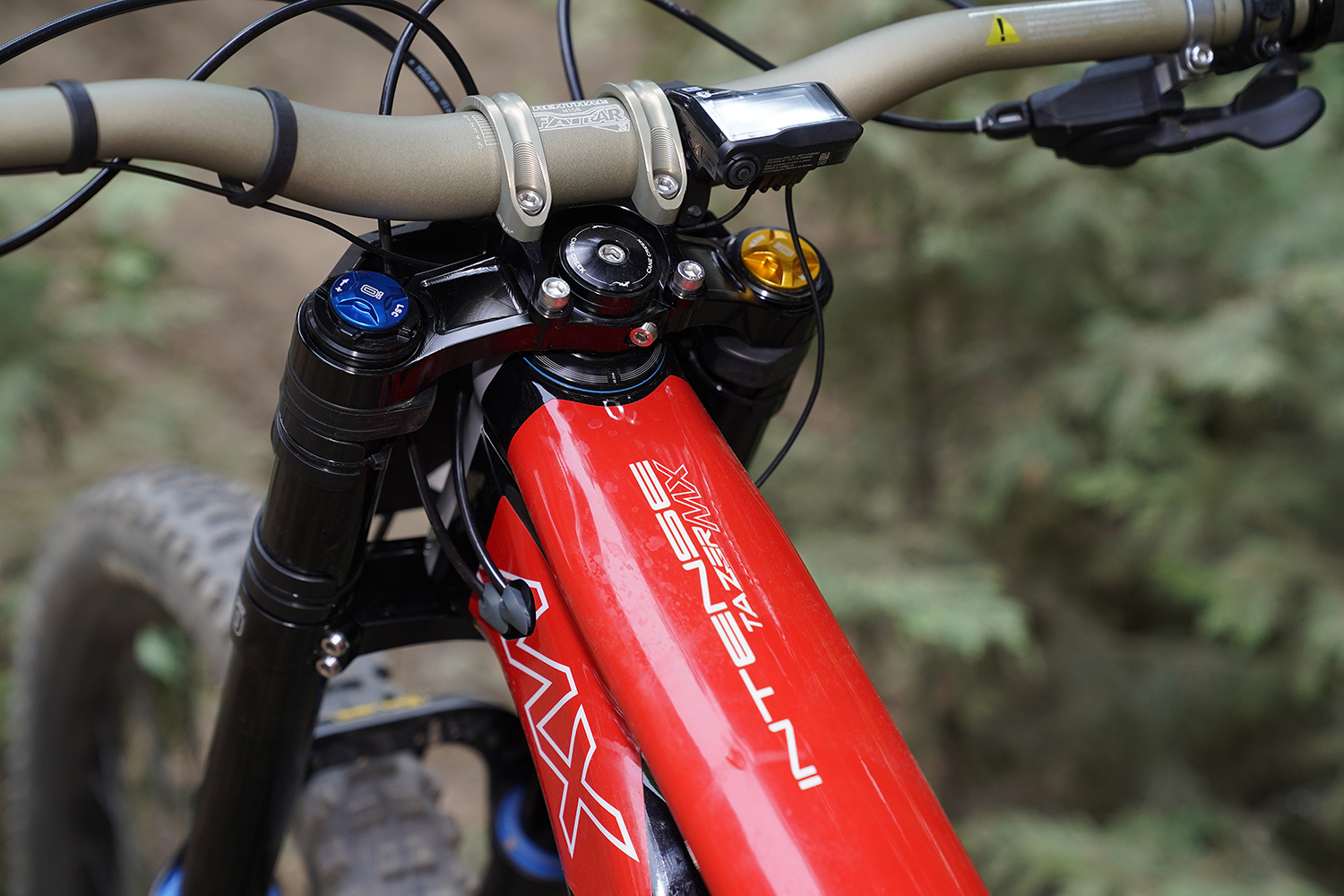 Typically, a dual crown fork and coil spring shock is a direct indication that you are shuttling or taking a lift up the mountain to enjoy the bike for what it is meant for. The Tazer MX has changed that narrative with the all-new Shimano EP800 pedal-assist drive train. The new Shimano motor is designed to provide a more natural power assist, with less motor noise and greater range. Compared to the existing Shimano E8000 motor, the new motor has a less-aggressive burst of power down low that comes on more smoothly. For those who think pedal-assist means a throttle and no exercise, you’re gravely mistaken. A pedal-assist motor complements the power you put to the pedals, making you essentially twice as strong. You still must put in the effort, and it is very possible to get a great workout. 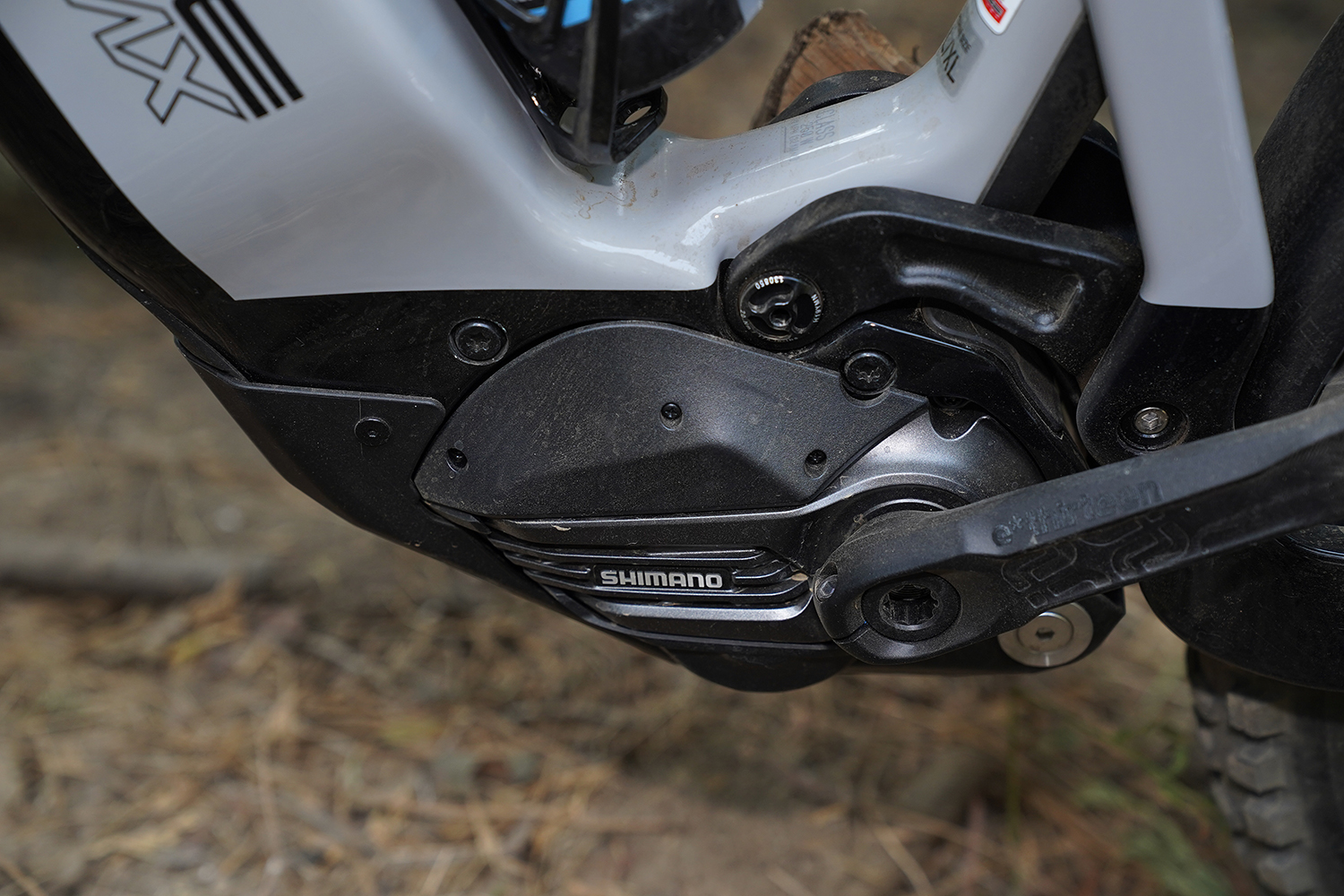 The balance of the bike is great and it felt more planted and leveled while climbing than we expected. With 170mm of travel up front and 150mm in the rear, the Tazer MX had great hold up when climbing with very little movement. The 29er front wheel and 27.5 fatty rear tire is a great set up for roll speed, traction and comfort. Pedaling up the trail, the bike feels balanced and nimble, unlike a traditional downhill bike that utilizes a triple-crown fork would. When descending steep rough sections, the dual-crown fork had great stability and comfort. The Tazer MX is a big bike and it inspires plenty of confidence while descending. 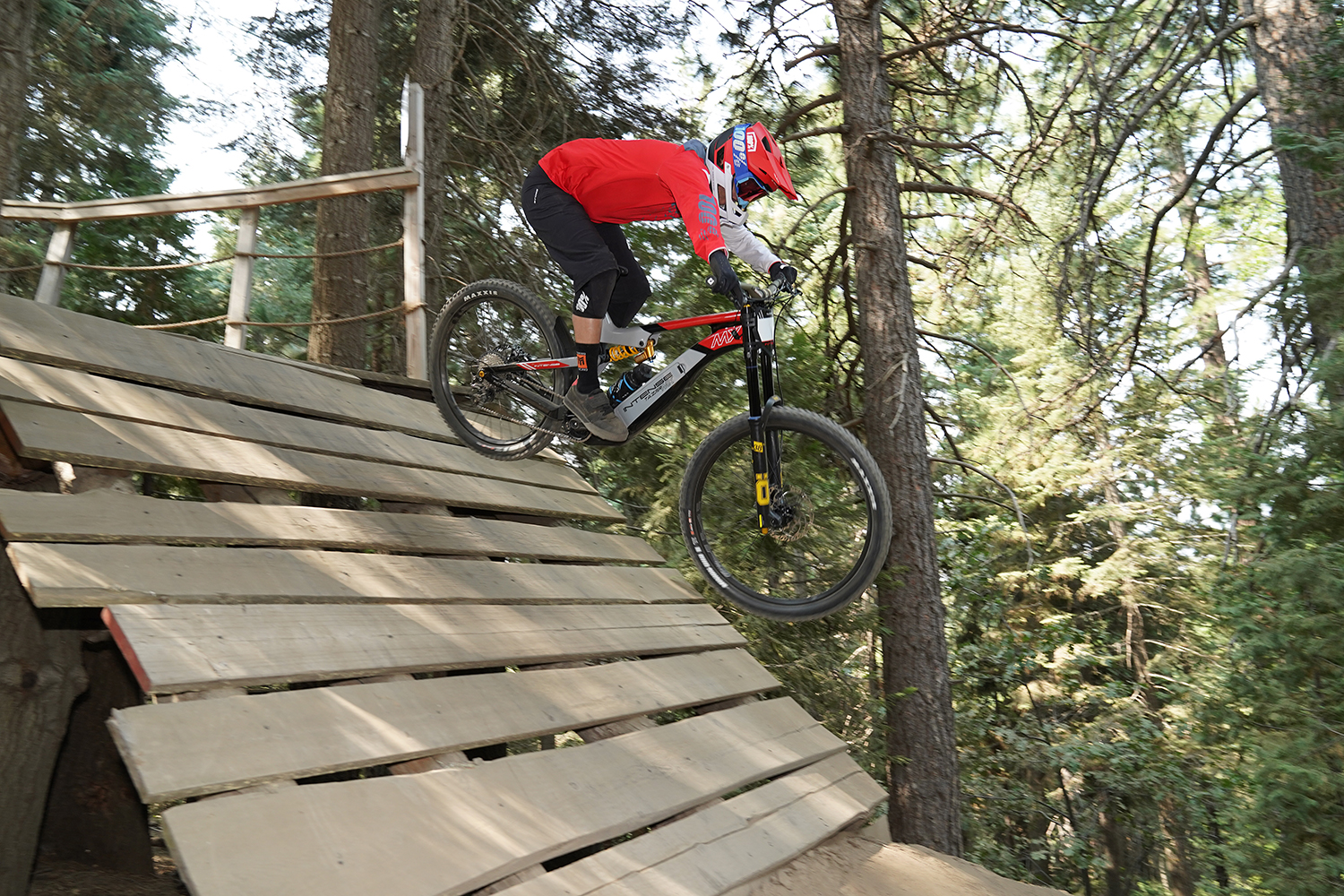 The only complaint we had with the fork was its limited turning radius. Because the upper fork tubes can come into contact with the frame in tight corners, rubber bumpers on the tubes are used to eliminate a chance of damage to the carbon fiber frame. Did we really need more turning radius? Not really, as leaning the bike into corners beneath us could make up for the lack in cornering radius, but the set-up can be a problem for newer riders who are more comfortable steering. 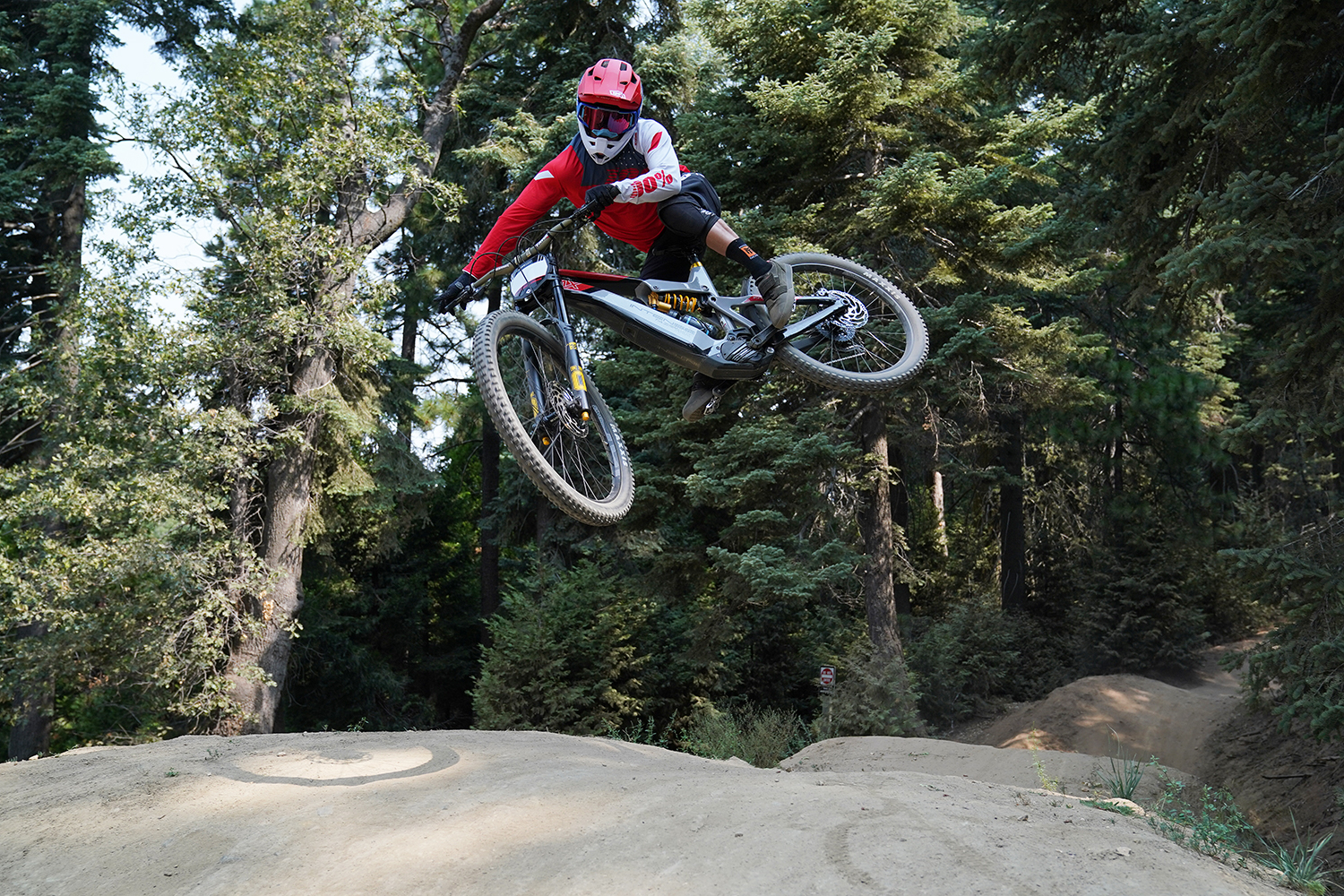 When making the switch from motorcycles to mountain bikes, the lightweight bikes are tough to get used to when you are trying to jump. The balanced weight distribution and extra girth of the Tazer MX, though, really allows the new rider to gain confidence while jumping, right out of the gate. The Magura brakes work great and we. were able to stop the beast of a bike with ease. The Maxxis DHR tires, meanwhile, were confidence-inspiring with great traction and hold up, with no rolling off the rim under hard braking or large impacts. 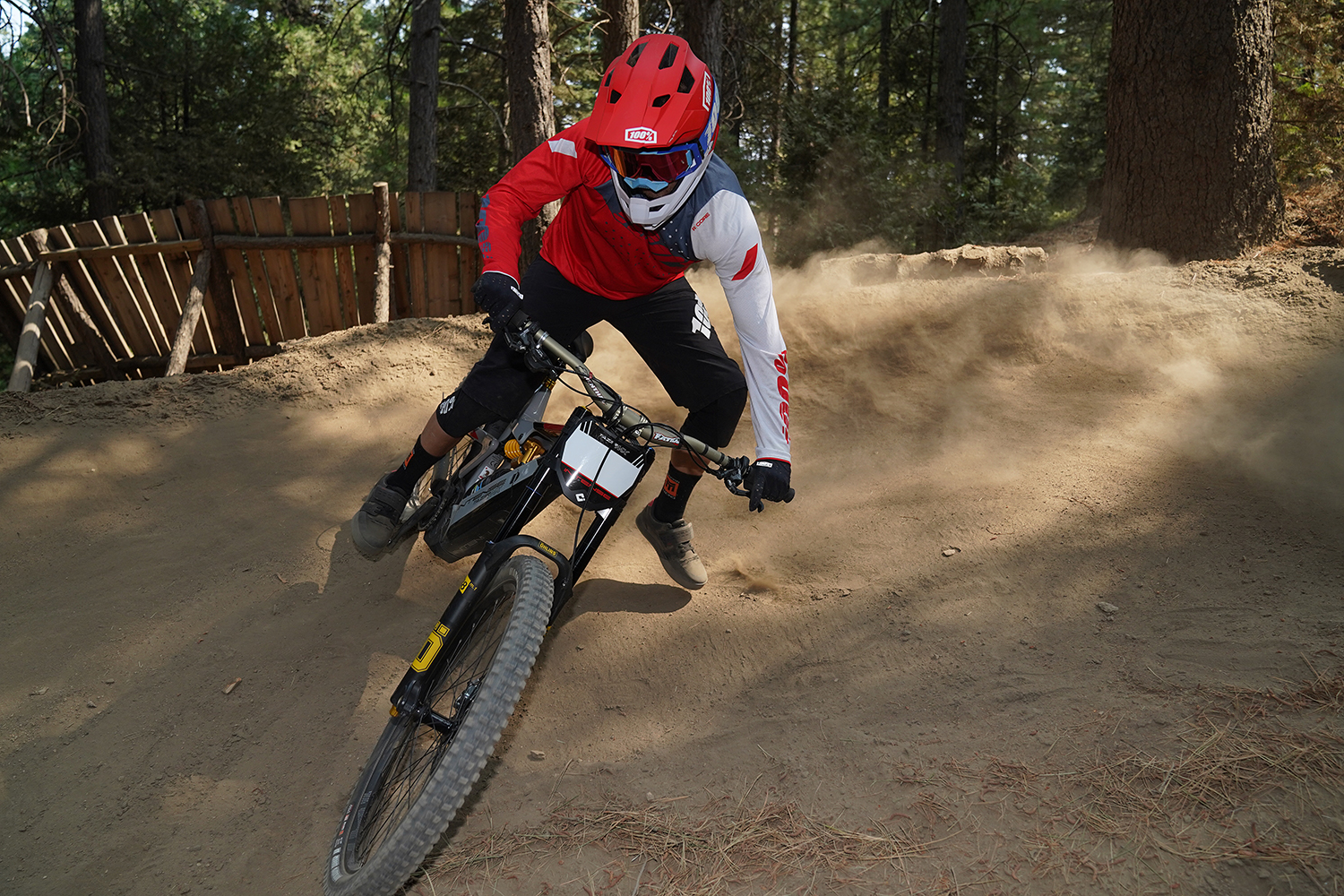 The biggest question is, “Is the Tazer MX overkillI for you?” Well, for the type of riding that we usually do it is, but for the rider who really wants to push the limit, have a trustworthy bike that can handle anything you throw at it, the Intense Cycles team nailed it. The attention to detail is excellent and the Tazer MX is an exciting bike to ride and will allow new bike riders to ride with confidence, speed, and style once they throw their leg over the bike. Kudos to Intense for pushing the limits and staying core to the moto crowd they have been involved with for over 20 years. 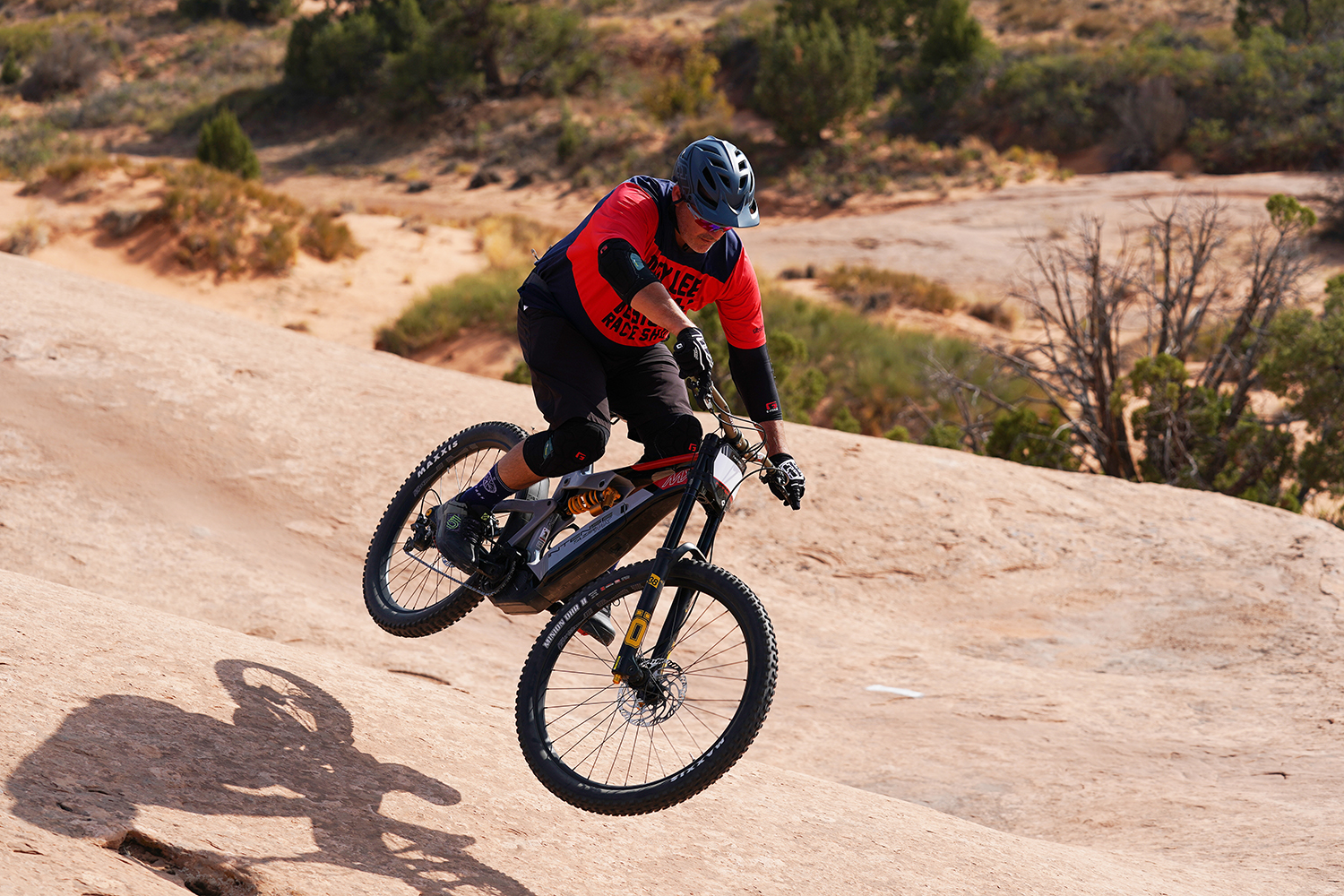 Confessions of an eMTB Hater

It all started with a text, “Let’s go to Skypark Sunday.”  The Skypark trails are always a lot of fun so I was ready to jump at the opportunity, but then came the next text…  “I have an e-bike you can ride.”  Being more of a traditionalist when it comes to mountain biking, I wasn’t quite sure if I was willing to cross over that line into e-bike territory. I’ve always been on the side of the fence that considers riding an e-bike ‘cheating’ or that it was not enough of a workout. If there was ever the perfect place to try an e-bike, Skypark is it, so I agreed to give it a shot. I normally ride a trail bike that takes some effort to get up the hill, energy that I’d rather use on the trails down the hill since that is the fun part of a bike park. The Intense Tazer MX allowed me to put in many more laps than I would on my traditional bike, and after several laps on the trails, I realized the smile I had on my face the entire time. Even climbing was fun! I was able to ride more than twice as many laps as I normally would, but at the end of the day, I still felt like I’d had a good workout.  The Tazer MX still gives a great workout, but it extends the fun.

My second outing on the Tazer was at the PNG Nutrition Tuesday night ride.  Normally I’d never be able to keep up with Mike Sleeter and his crew on my trail bike, but the Tazer MX allowed me to keep pace with the group. I left the E-Step power selection in the ‘Trail’ mode for most of the ride, and the steep hills that would normally have left me far back in the dust, I was instead able to keep up with the group and enjoy the technical downhill trails much more. On the flatter sections of the ride, I dropped the E-Step selector to Eco mode to lower the amount of electric pedal assist. Again, after a 13-mile ride, I had a great time riding and still got a great cardio workout. 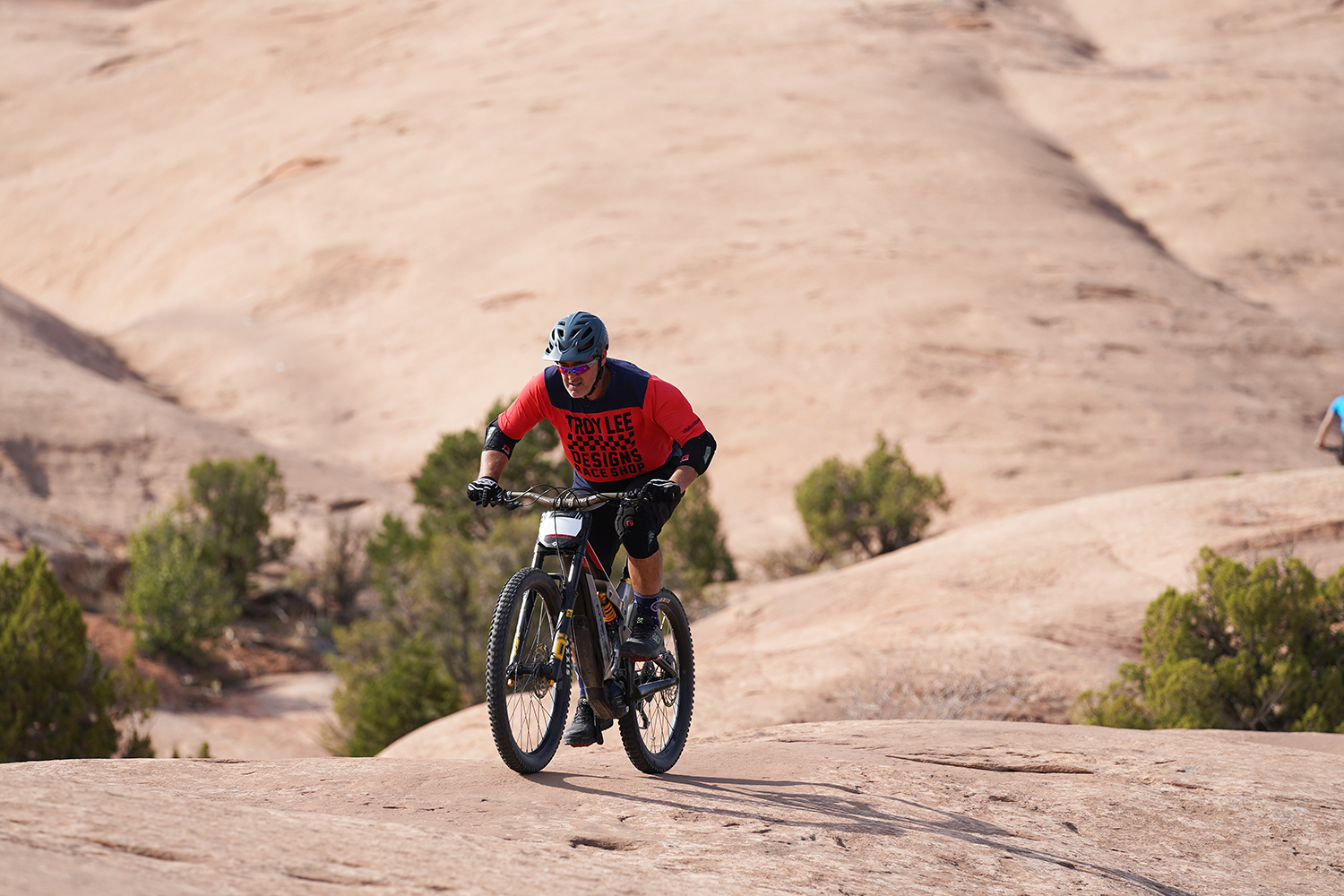 My third and fourth rides came in Utah, on the infamous Slickrock Trail in Moab, and the insanely fun and technical Gooseberry Mesa trail in Hurricane. Both trails would be extremely challenging on a traditional bike, but I was able to conquer every obstacle and uphill on the Tazer MX. Making things even cooler was the fact that our entire group – which included Jeremy McGrath – was eMTB mounted!

After four rides on Intense’s Tazer MX, my perception of e-bikes has drastically changed as they open up a lot of opportunities to have more fun on the ride while still getting a workout.  While I am not quite ready to sell my trail bike and replace it with an e-bike, it would definitely be an excellent addition to the stable to open up new adventures.

The Tazer MX was a perfect bike on the downhill trails as well. It tracked straight and cornered through the turns smoothly.  It handled both the park trails and the steep singletrack in Capistrano and Utah with ease and even in the tighter corners, it turned quickly and smoothly. The weight bias reminded me of my dirtbike and I immediately felt comfortable throwing the Tazer MX into tight technical trails on the edges of cliffs.  With a couple of clicks of the compression and rebound to suit my riding, the bike jumped smoothly and was very predictable and easy to move around both in the air and through the corners. 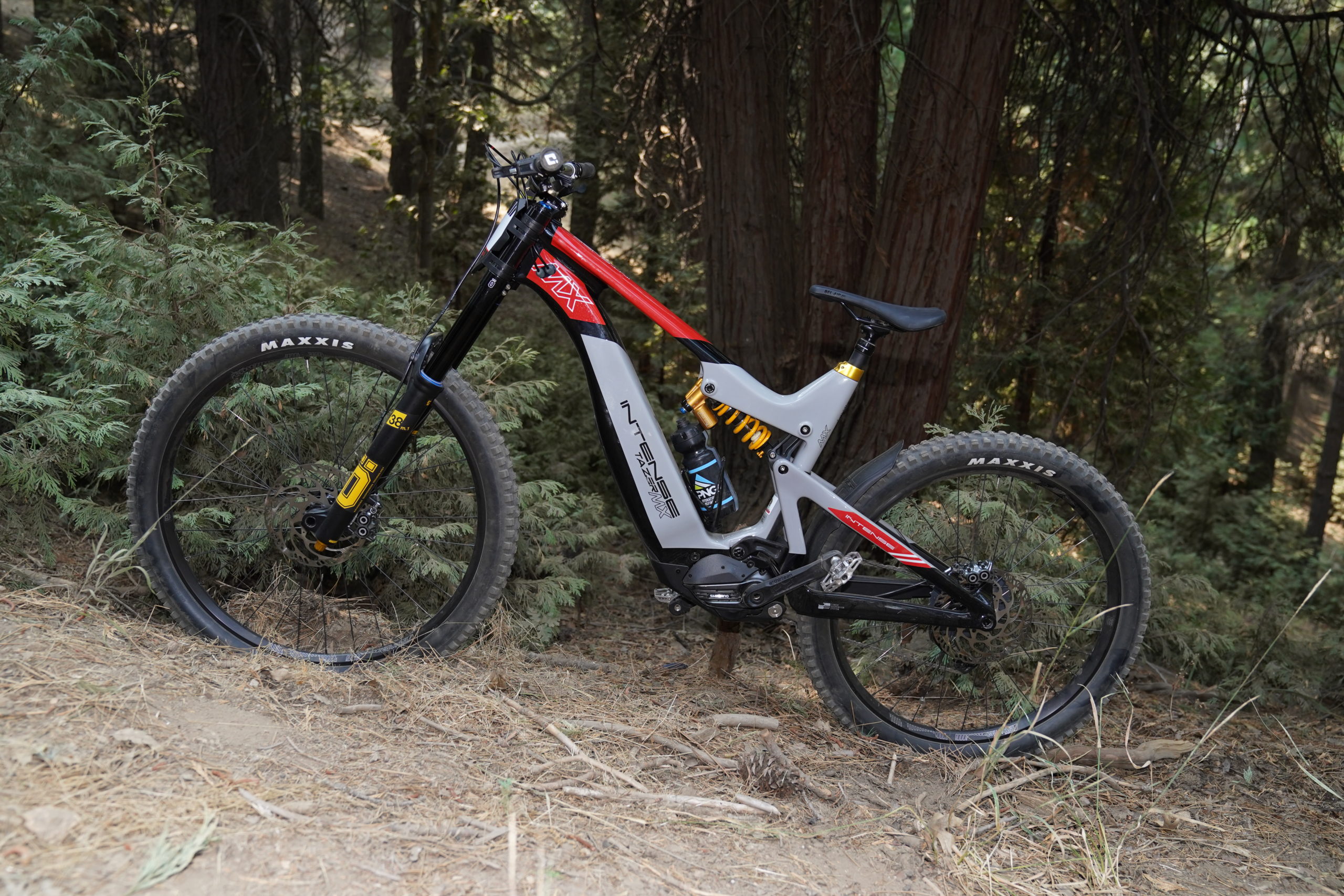