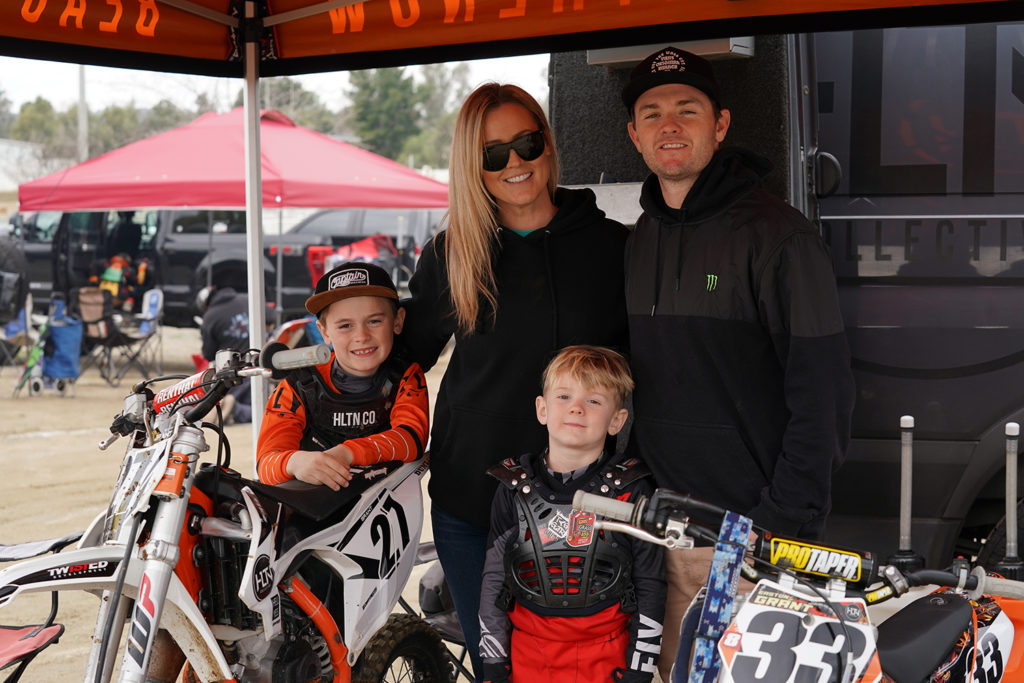 In 2012, along with Marc Fiore and Craig Davis, I was proud to be one of the founding members of what was known as the Muscle Milk TWMX Race Series. At the time, local motocross racing in Southern California was stagnant even though the tracks were packed to the brim on open practice days. Our goal was to provide a better racing experience and help grow the sport and within only a few rounds, attendance at our events was amazing. Through it all, one of the most rewarding aspects of being on the promoting side of the sport has been watching the interaction among families at the races. At the root of it all, motocross is an amazing family sport and there’s no better place to see evidence of that fact than at one of our races. Of course, our platform has evolved greatly through the years and I’m still just as proud to be involved in the AMSOIL Swapmoto Race Series.

This weekend, we were treated to something really special as Josh Grant brought his boys Wyatt and Easton out to participate in their first-ever motocross races. I’d been laid out with the flu all week and had planned on riding the couch on Sunday, but a call from JG33 on Friday changed my mind in an instant. “We’ve got no baseball this weekend, and the boys want to race,” he said. “All they’ve done in the past it the little mini race at A Day in the Dirt…we want to check out one of your races on Sunday.”

Watching Wyatt and Easton experience their first race day with their family on hand was really cool, especially because Josh’s dad, Mike, was also at the track. I can remember watching Mike and Josh show up to the races together in Josh’s early amateur days, and always chuckled when I would continue to see Mike hanging out at Perris Raceway on open practice days, even while Josh was across the country, racing Supercross.

Both of the Grant boys had a lot of fun at their first motocross race and raced without incident. Wyatt had a small tip over in one of his motos, and it looks as if Josh and Ashley Grant may have a new weekend activity on the calendars! 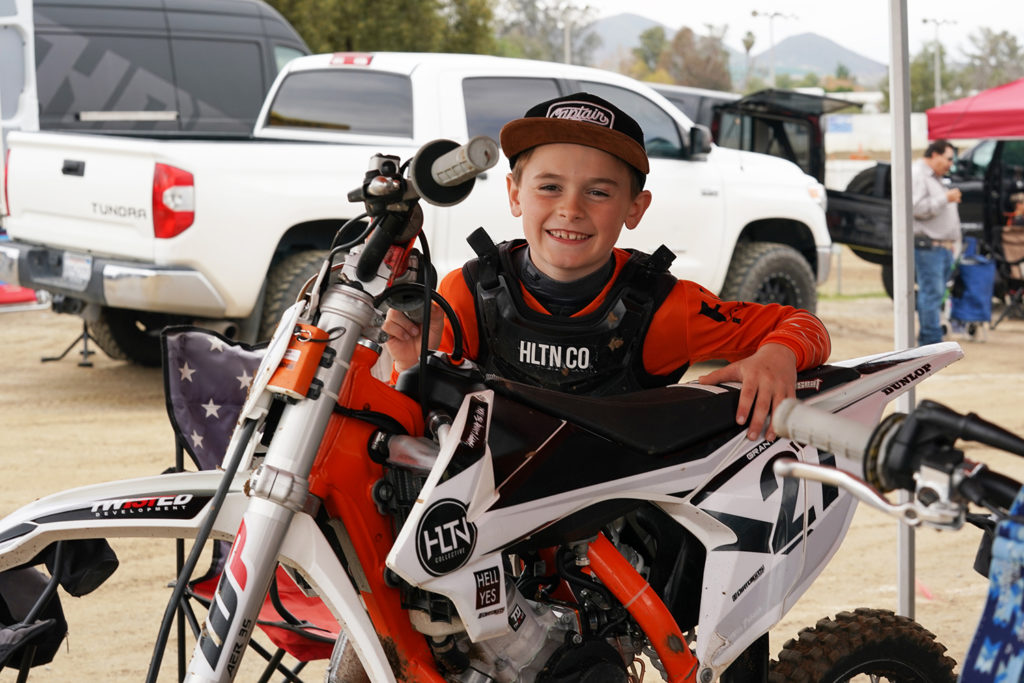 Today is your first motocross race. Were you excited and nervous last night?

What are you looking for today?

My dad says the most important thing is to have fun!

Is there an advantage, having a famous racer dad?

Yes. He shows me the good lines and tells me where to ride out on the track. 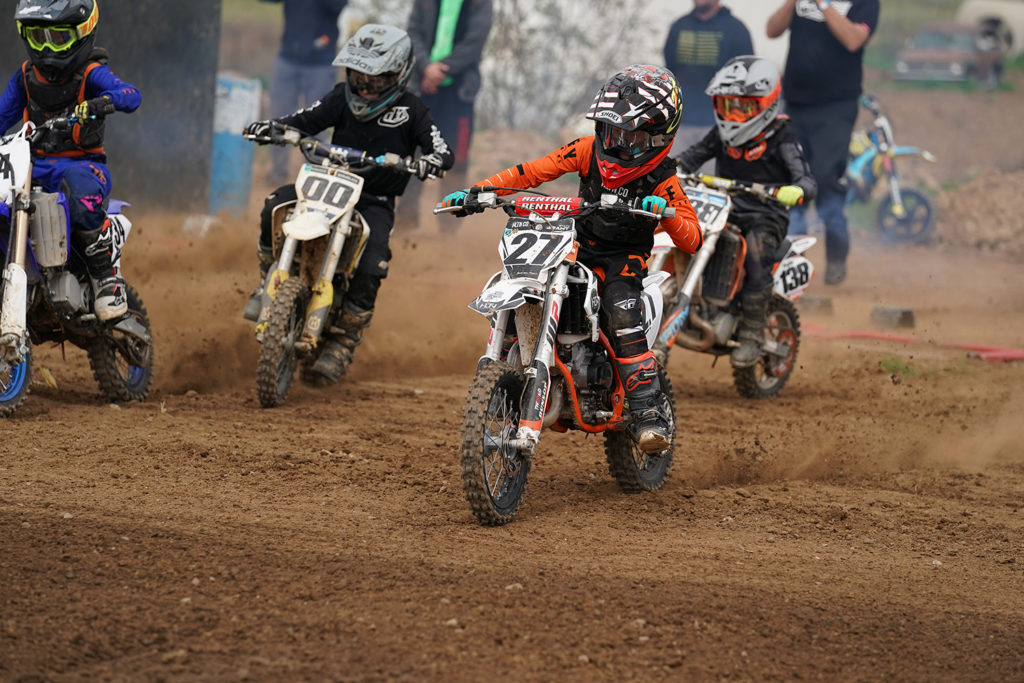 Can you tell me about your bike?

It’s cool! Twisted Development made it really fast and I think it looks cool. It’s a KTM.

Has motocross always been what you wanted to do?

No, I like baseball better. I play for the SoCal Aces and I play every position.

What are your favorite places to ride?

My favorite tracks are Glen Helen and Fox Raceway because they always water them and they are not all dry and slippery.

How have your races gone so far today?

They have been good. I really liked everything about it. 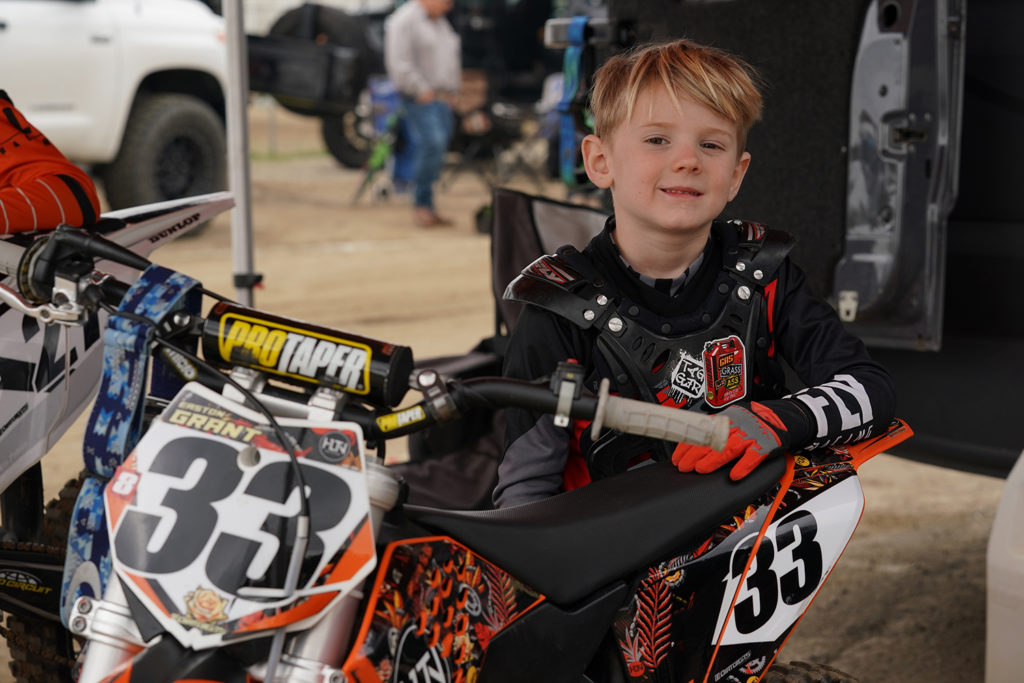 Hey, Easton, can I ask you a few questions?

Are you excited about racing today? 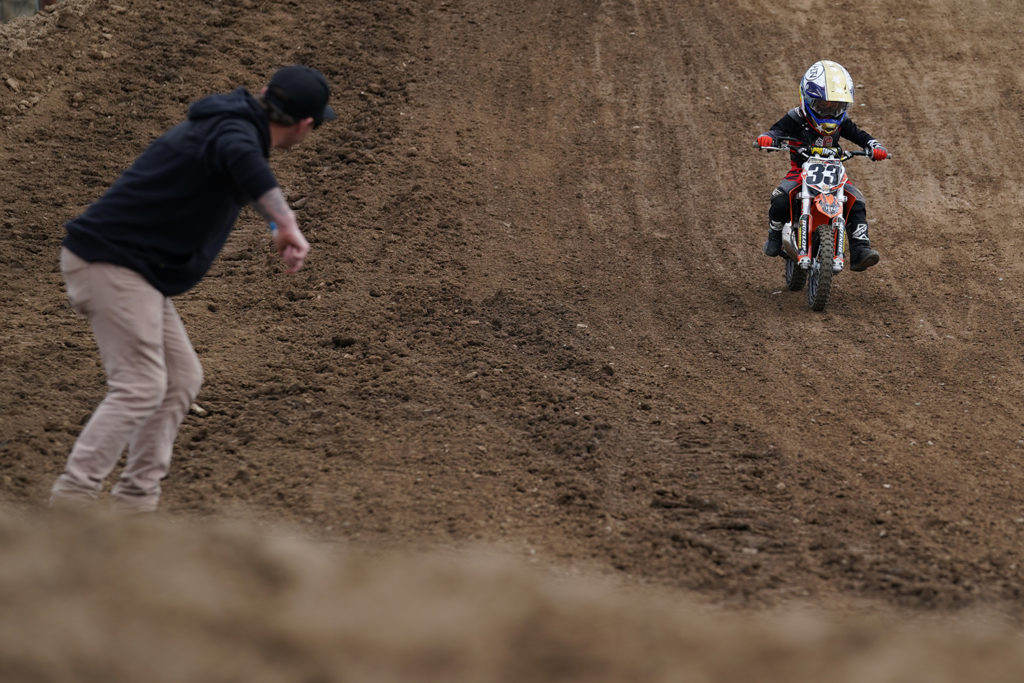 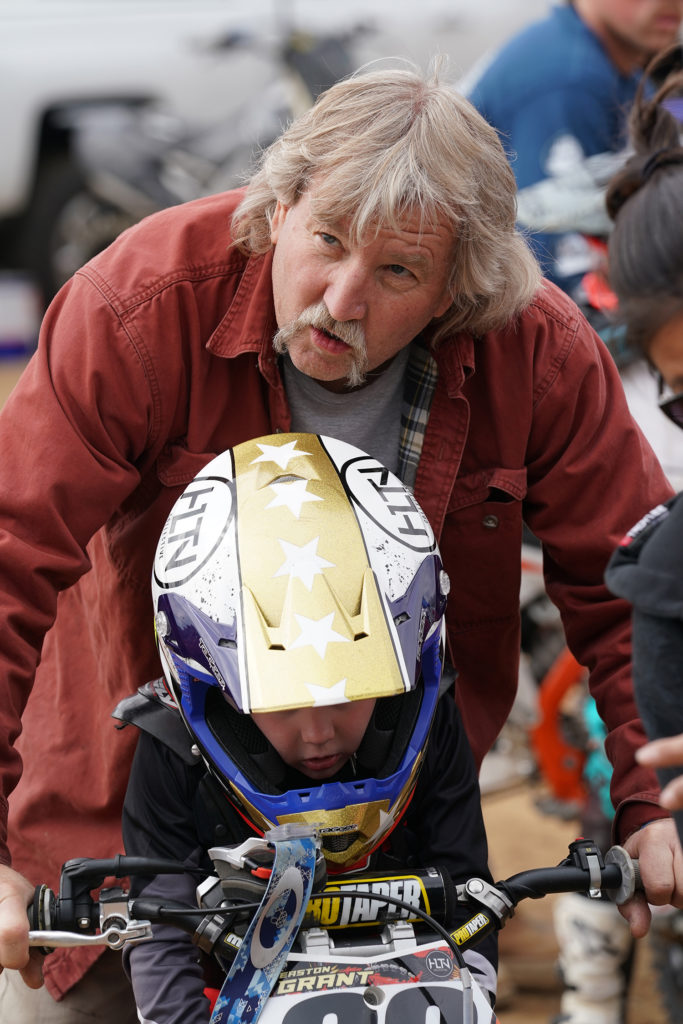 Feels like you cannot escape Perris Raceway, doesn’t it!

I think I’ve been here a time or two… (Laughs)

Is it scary or exciting watching your grandsons line up for the first time?

I’m not scared. We’re just here to have fun. Let’s have some fun. It’s been enough work the past several years. This is just fun.

Did you feel this day was inevitable?

I was hoping that they would just ride for fun. I knew that they wanted to race, but I really wanted to just keep them play riding.

How is it watching Josh with his own kids, here at the races?

Watching Josh do it…I think he might have a lot of my habits in him. (Laughs) So I don’t know if that is good or bad yet? (Laughs) I did yell quite a bit I guess when I was younger. I’d say I was a little naive I guess.

I used to crack up when Josh was racing somewhere on the other side of the country, but I’d still see you out here at Perris hanging out…

I have been here when Josh was racing somewhere else. (Laughs) I mean, I love this sport! I’ve been around motocross since Jeff Ward was riding a Honda XR75 at Escape Country! It’s a lifestyle. (Laughs) 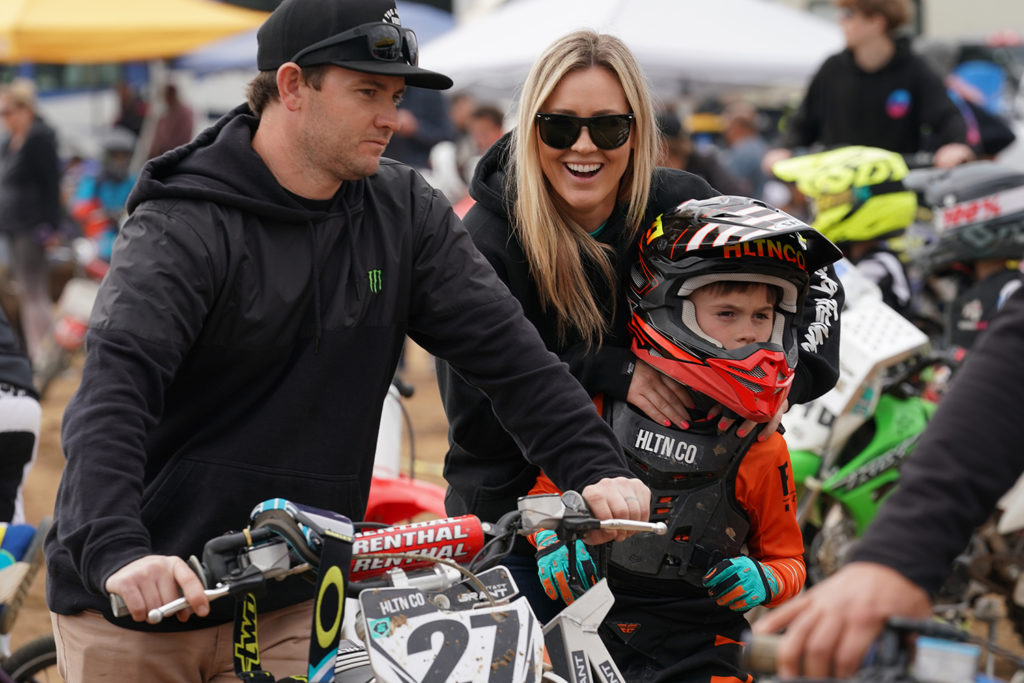 (Laughs) I have avoided it for nearly 10 years! I almost made it 10 years!

Are you a bundle of nerves today? At their first race?

No, because they are not as fast as they thought they were. (Laughs) It’s kind of humbling!

So you’re not nervous at all?

So you said you made it nearly 10 years without letting the boys race motocross…what prompted today’s sign-ups?

You know…we knew it was going to happen. It was inevitable and just a matter of time. They’ve grown up watching their dad race, and every kid wants to be like his dad.

Wyatt told me that he likes baseball better…

That’s my lefty! Ask him how much a center fielder makes. (Laughs) 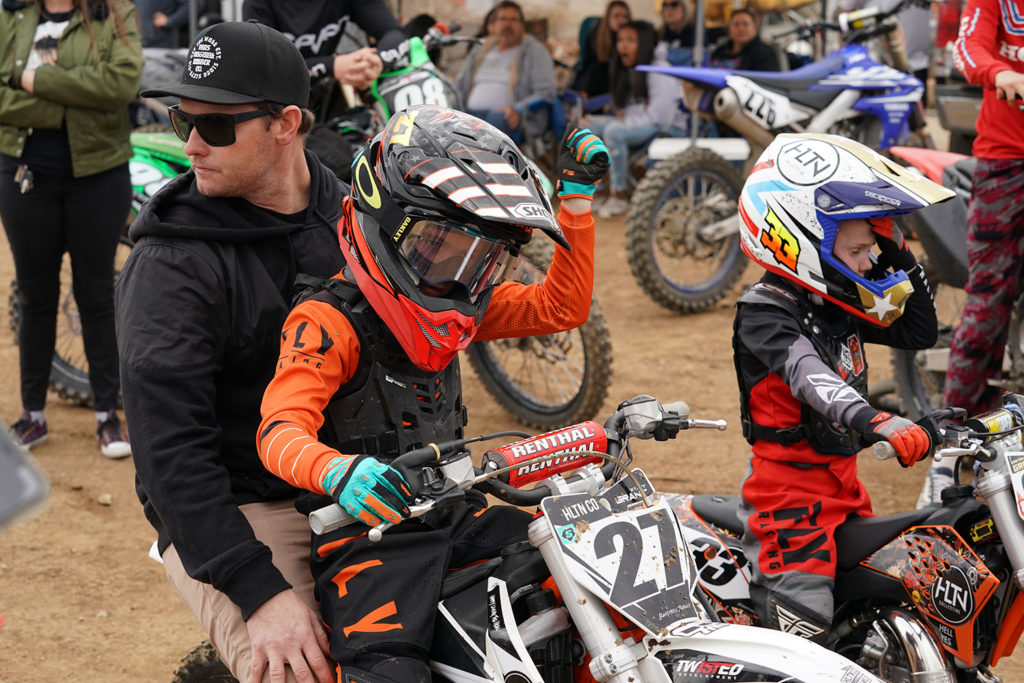 This is the first motocross race for the boys….was it long awaited, or were you trying to put it off?

(Laughs) I think we delayed it as long as we could. Ultimately, they kept bugging me about it and we had no baseball this weekend so I said, ‘Okay, we’re going racing!’ It’s fun though. I mean, I grew up out here at the track and I am getting those feelings from back in the day again. I am glad that they are enjoying it and we are having a good time out here as a family. Together.

What preparations went into today? What were the dinner conversations like last week? Full of strategy and pep talks?

(Laughs) I didn’t really talk about it much because I thought if I did, it might make them nervous. And I am no mechanic but I had to get the bikes ready for today…air filters, oil..all that! I did it all solo. I was up until about 11:00 working on them and I figured that was good enough. They haven’t ridden enough to hammer the bikes yet, so I am lucky.

At the root of it all, we’re all in motocross because it’s fun…

Oh yeah. every time we go riding, I just tell the boys to have fun and that is the most important thing. Number one is always having fun. It doesn’t matter if we are riding in the hills or at grandpa and grandma’s house…we just go out to have fun. If this is what they want to do down the road, well this is the start of it…as long as they are having fun I will back them.

I’ve seen Nick Wey go from bringing his kids out just to have a good time, to grooming two national-caliber mini racers. And now Ryan Morais is dipping his toe into the water… Can you see yourself getting in, all in?

Once you get to that level there is a big commitment level. I think when my kids decide that they want to do that, we will have to sit back and decide if we are ready to or not. Right now, it’s still fun and games…the first one. If it is something they wanna keep doing…we will see. It’s all fun until you go down big, right? I mean, that’s the big tale of our sport. Until we have one of those big ones, you don’t know. Today, we are looking to introduce our kids into the sport that brought me so many good times.

Is it fun to be at the track in a different role?

Oh, yeah! Honestly, I wanted to come out and race, too, but knowing that these two would be racing also I knew that there was no way I could do it. Maybe someday when they are into a routine it can all happen, and you will have all three of us out here enjoying ourselves, racing on a Sunday at Swapmoto Race Series!

Tonight is the second attempt at the Fortnite Tour

These videos crack us up. Little dudes are psyched

We know quarantine has made online gaming more pop

Stoked to have this ripper attending Mini Major by

This is the home of the Mini Major East! @mattwal

Tag someone you know on the East Coast that should

Are you getting excited about the Mini Major West

Another rad opportunity for racers at the Mini Maj

Pre Reg. Closes tonight at 9pm. Round 2 of the Ter