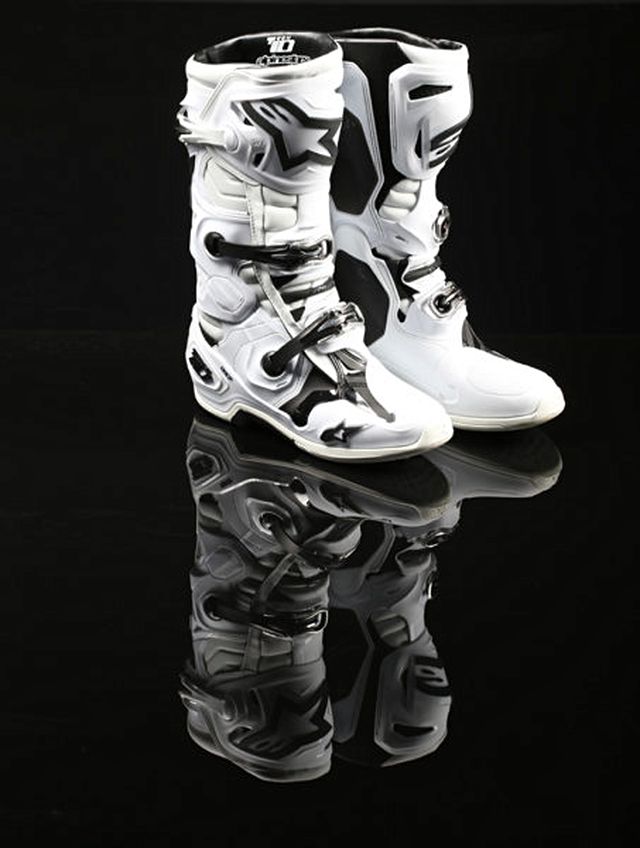 It’s been well over a decade since Alpinestars introduced the Tech 10 boot, and through the years it has undergone countless revisions that have made it the most popular boot in motocross racing. The latest version of the Tech 10, though, is a completely new boot that shares very little with the existing version. The biggest change is the new Frontal Flex Frame, which utilizes two asymmetrical hinges in the ankle area in unison with the front and rear blade connectors that prevent over-compression and hyperextension. Combined with a redesigned inner bootie with dual-pivot ankle braces built in, the new Tech 10 is designed to require no break-in while at the same time offering more ankle support and protection than before.

At the rear of the new sole is the new Dynamic Heel Protection System, which is essentially a piece of crushable polystyrene inside the heel area, replacing the hollow honeycomb design of the prior boot. In mid-air eject crash situations in which riders land on their feet and injure their heels or legs, the crumple zone in the heel should help alleviate the blow. If this type of crash is sustained, the crushed foam in the heel is replaceable by Alpinestars.

The all-new sole is constructed of more durable materials and features a replaceable arch area. The new design is also said to offer better feel for the shifter and brake pedal. Overall, the boot is smaller in size and a pair is up to 400 grams lighter, depending on the size. Though the Tech 10 is completely redesigned, it feels very familiar when you slip your foot into it. The new bootie has a one-sided closure that is easier to open and close. It’s tough to detect the one-pound weight difference when holding the new and old Tech 10s in your hand but when they’re strapped onto your feet, it’s very easy to tell that each boot is a half-pound lighter. The new buckle system opens and closes like butter. Furthermore, they are less susceptible to mud clogging, thanks to their new design. Adjustments are easy to make, and all of the straps have plenty of room for even the largest calves. Aesthetically, the new Tech 10 maintains a trademark Alpinestars look, but they have a much more modern appearance. The toe box is slimmer than the predecessor’s, and getting the boot beneath the shifter is even easier. Feel through the sole is excellent, and the new shank in the sole feels stiffer and more supportive. The sole enjoys great traction on the pegs. The new hinged-ankle design offers plenty of flexibility right out of the box, and these are by far the easiest Tech 10s to break in. The extension stops on the front and rear of the boot allow for ample range of motion, but stop before the natural extension of the ankle is reached.

The boot is a tad shorter in overall height. While we suspected this could result in some new snags or catching against the sides of the bike, we’ve encountered nothing of the sort. The top lip of the boot is tucked in quite well and also enjoys a great seal against dirt, sand, and the elements. Traction afforded by the inner panels of the boot is just right and helps the rider grip the bike for added control.

Checking in With Jett Lawrence