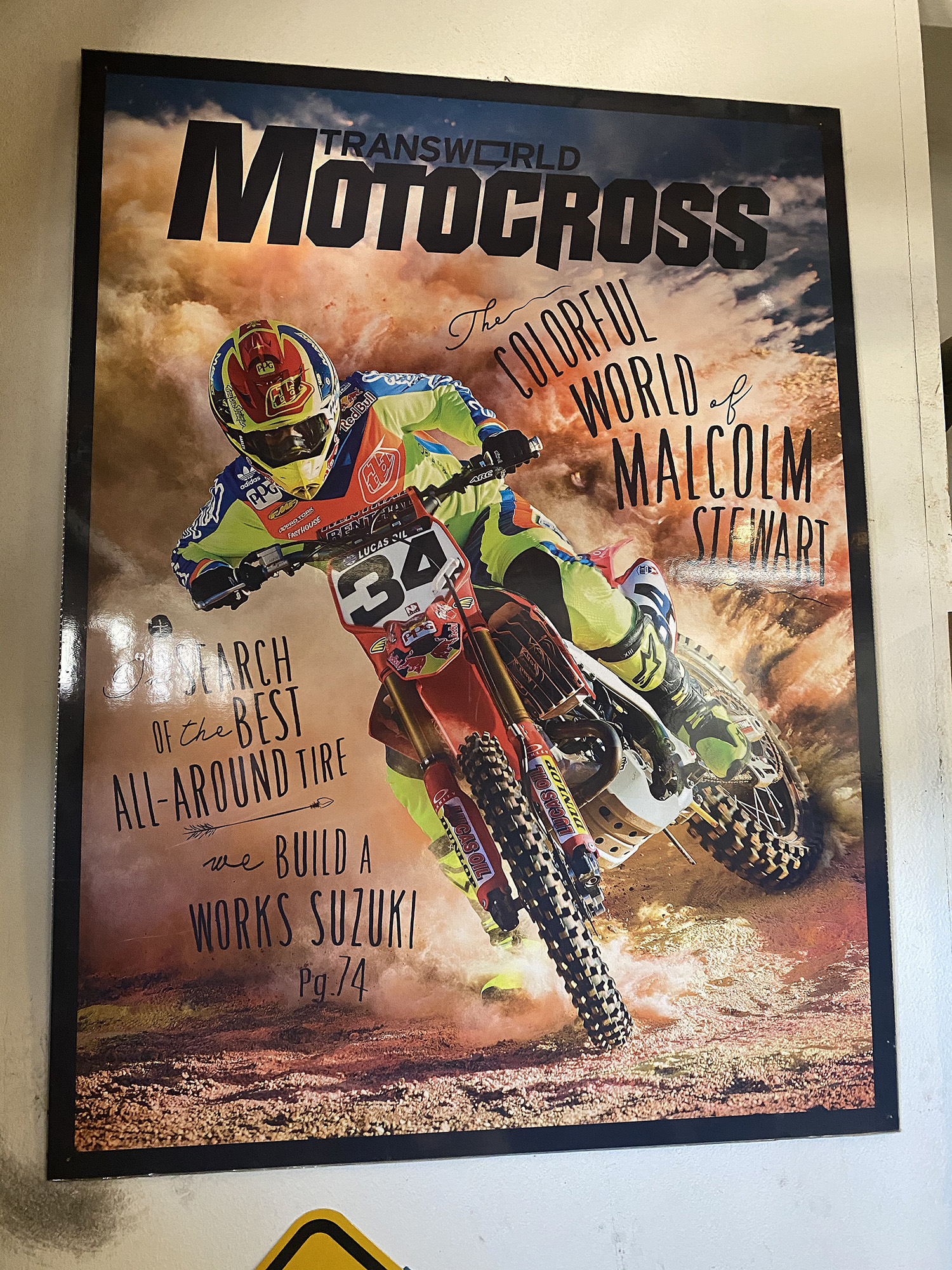 The walls of my garage are covered mostly with old helmets and number plates, but I do have a couple of cover blow-ups from my days at the helm of TransWorld Motocross. One of them is from the August 2014 cover we produced with none other than my pal Malcolm Stewart, aboard his Troy Lee Designs Honda CRF450R, and the other is of Christian Craig, scrubbing a jump that we lit on fire. (That’s a story for another post, though!)

To really appreciate the concept and effort that went into this shoot, you need to see the original photo…not just an iPhone snap of the poster on my garage wall. 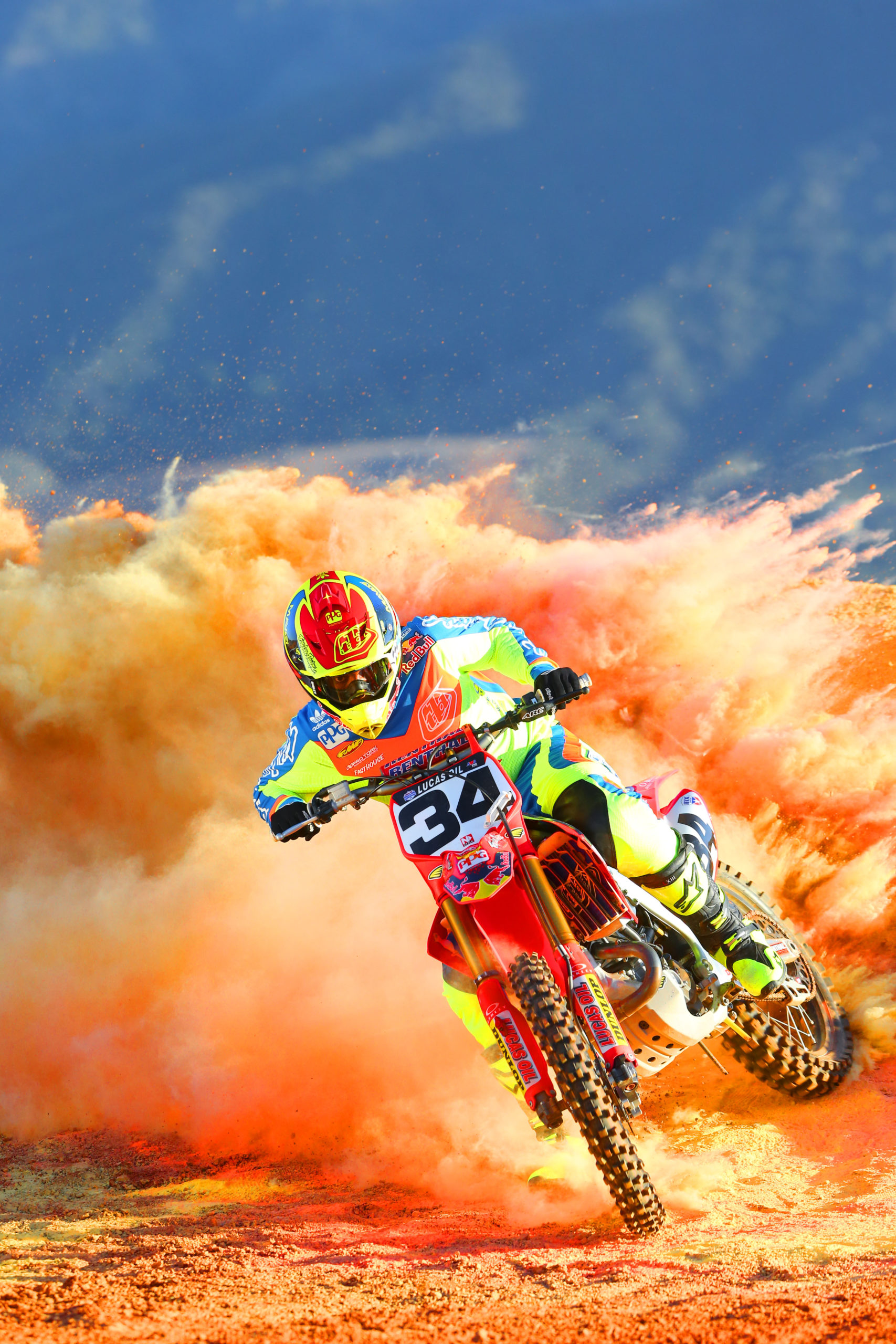 When we decided to put Mookie on the cover, our Art Director Shane Kinman immediately began to cook up a bunch of crazy ideas. I think one of them was to actually submerge Malcolm and his bike in a swimming pool and shoot it with an underwater camera housing. Let’s be honest: Shane used to get really wacky in our cover meetings, but we finally agreed upon ordering 30 pounds of colored chalk powder. Normally thrown at sweaty joggers during those “color run” 5Ks, the chalk was pretty easy to find online and available in several bright colors. Knowing that Troy Lee Designs had a set of gear that was flo yellow, flo orange, and blue, we ordered boxes of yellow and orange chalk for the shoot. Malcolm seemed skeptical about the concept of lining a berm with the stuff and blowing it out with a power slide, but like his brother before him, he was game to score a cover shot!

Now that years have passed, I can safely disclose that for the shoot, we actually poached the private Suzuki Supercross track by borrowing the key from James. Setting up for the shot was a mess! The chalk got all over Shane and I as we spread it out in the berm from top to bottom, and thanks to the 100-degree temperatures that day, it also stuck to my forehead and turned my face more yellow than it already is.

Believe it or not, I bagged this photo the first time that Malcolm blew the berm up! If my memory serves me correctly, he only went through the corner a couple of times because the chalk mixed with the dirt after the first pass, and the effect was not as good after that.

Of course, with a cover photo that was so unique, I needed to match the level of execution with the portrait of Malc that would open his interview feature. I think we succeeded! Ring lights are pretty badass and I like te vignette effect they create; and this was before every Instagram-famous chick had them for their selfies. 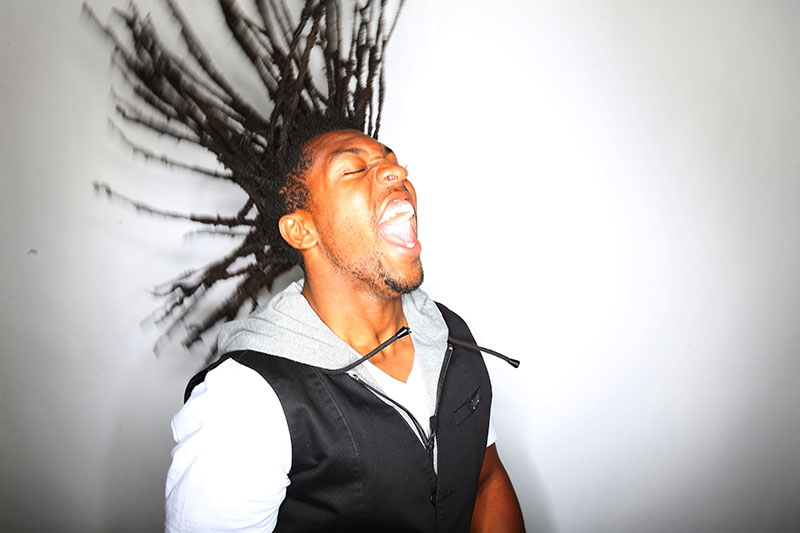 I’m really glad we went with this one, although the alternate was pretty good, too. Hahaha! 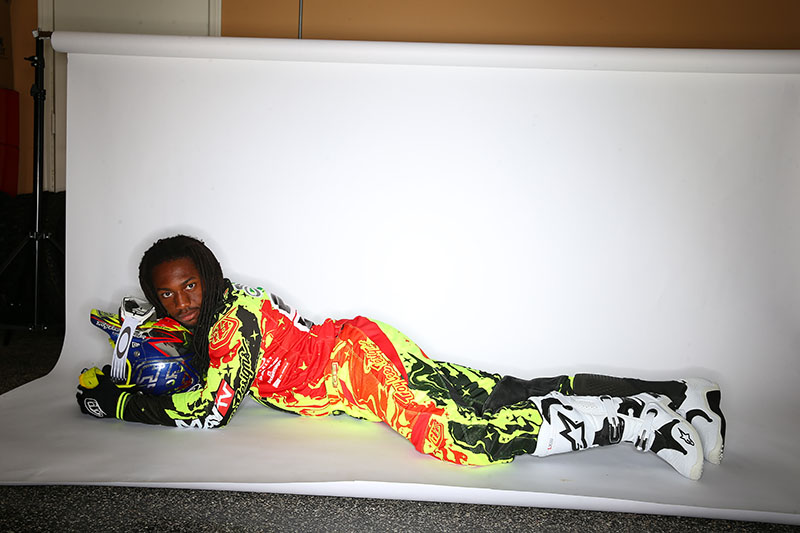 The next year, editors in our company were encouraged (forced) to enter a publishing contest called the WPA Maggie Awards, the longest-running media awards program in the United States. With a monthly magazine deadline and a website to maintain, plus Supercross in full swing, I begrudgingly got with Shane and we decided to submit the Malcolm cover into the contest in the Best Cover and Best Automotive and Motorcycle Magazine categories. Things got even more annoying when I learned that we were selected as finalists in both categories and were required to attend the awards show in Los Angeles. Alas, Shane and I got dressed up, made the horrendous trek to LA on a weeknight during rush hour, and rubbed elbows with hundreds of other magazine people who were also in the running for awards. 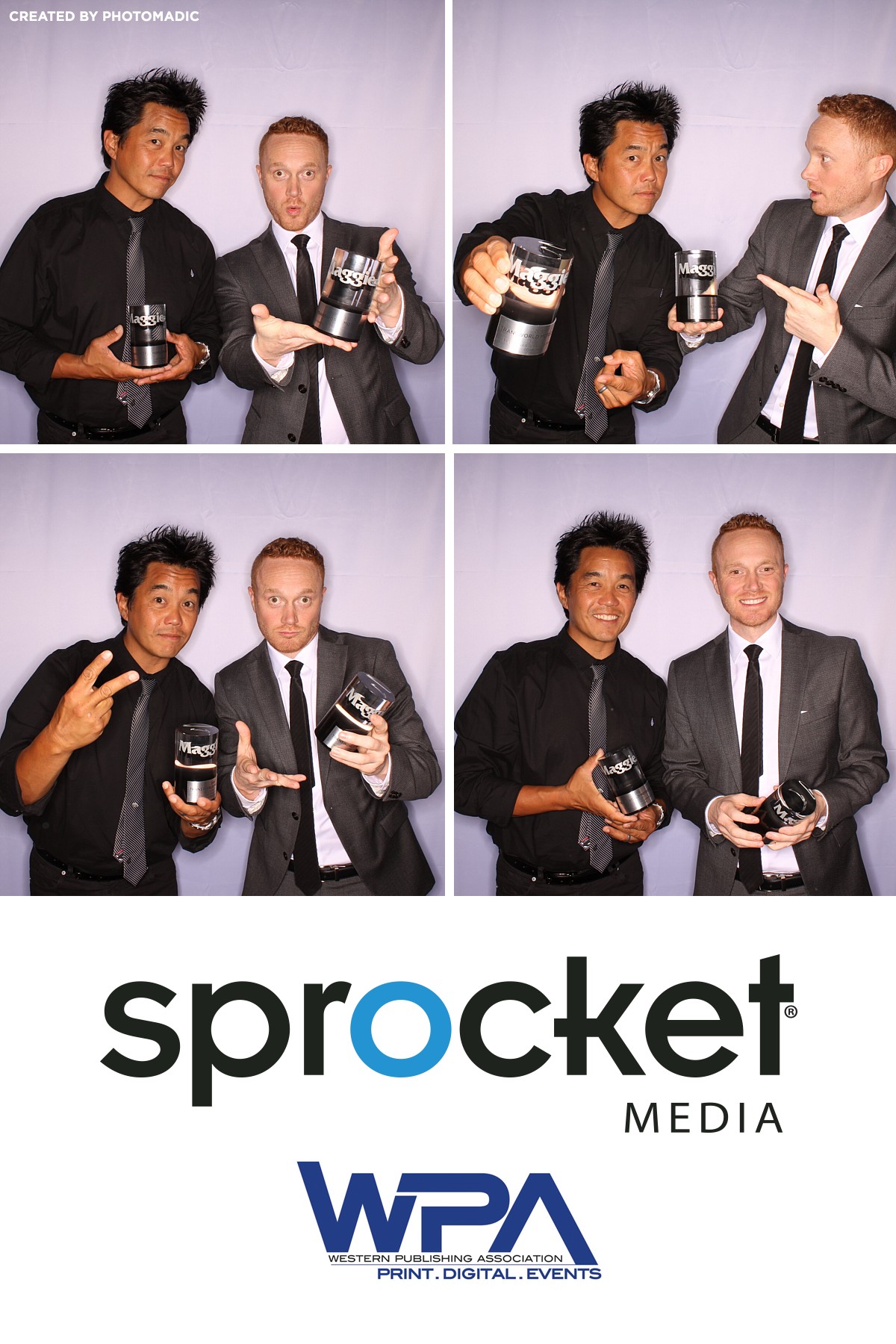 We won both awards! Suddenly, the process didn’t seem like such a pain in the ass. Haha!

I really miss working with Shane Kinman. Sadly, in our capacity at Swapmoto Live, we don’t have a need for a full-time art director, and before the demise of TWMX Shane had already moved home to Oregon to be closer to his family. I’ve got a ton of great memories with Shane, both as co-workers and good friends. Hopefully, our paths will cross again someday! 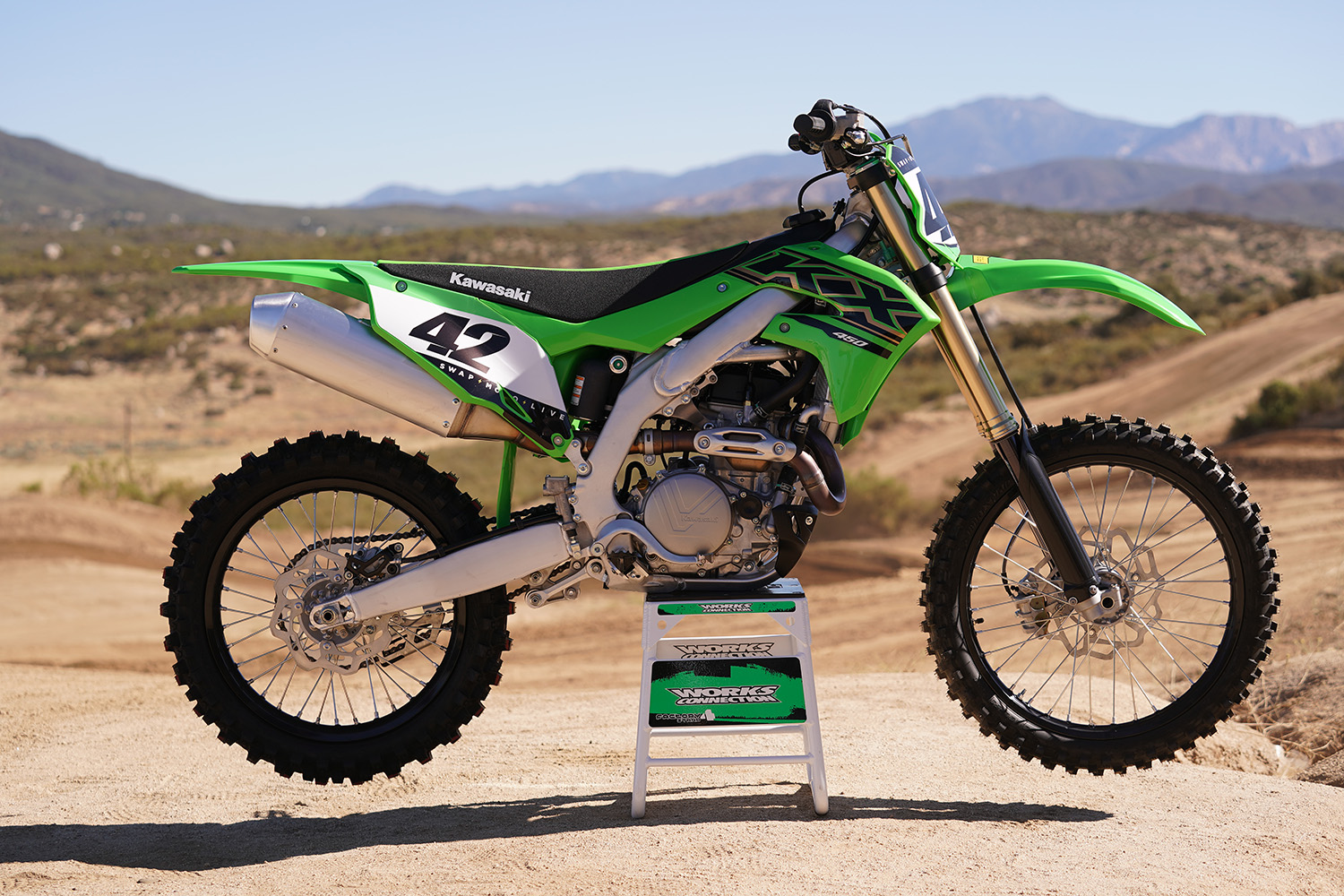 Okay, so this isn’t a graphics KIT per se, but when Kawasaki invited us to test the 2021 Kawasaki KX450 earlier this week, they gave us only a few days of notice. If you’ve paid attention to the KX450 tests from any of the other media sites, you’ll notice that several of them ran no numbers at all on their test bikes because they were unable to get them printed in time.

Jared Hicks at Backyard Design prides himself on quick turnaround and excellent customer service and giving him only two days to print and ship the backgrounds for our test bike posed no problem for BYD. Best of all, BYD’s proprietary vinyl features an exclusive cross-hatching in the adhesive that allows air bubbles to escape; making installation an absolute breeze. No lie; we slapped our backgrounds on with no issues in a matter of minutes…even the troublesome and tricky right-side panel, which is curved to accommodate the muffler.

Hands down, Backyard Design produces the easiest-to-apply graphics and numberplate backgrounds that we have ever used. Period.