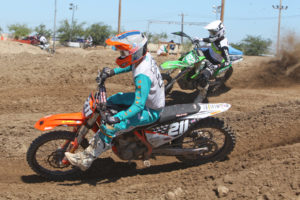 Kern County Raceway Park hosted the fourth round of the AMSOIL / DIRT BIKE KIDZ West Coast Open series, a new addition to the tracks in the Swapmoto Live Race Series.  The motocross track is adjacent to the oval tracks just outside of Bakersfield, CA.   The main track was a sandy flowing layout with multiple lines through many of the corners that a provided options for passing as well as jumps with triple options for the faster riders to make a pass.  The amateur track was a very jumpy and tight track that kept the racers on their pegs with little time to rest.   The feedback from the riders of both tracks was very positive and is a great addition to the list of tracks the series visits.  There were great battles on both tracks all day long. 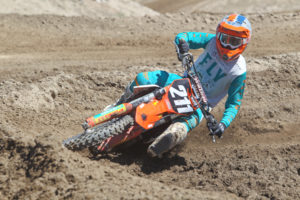 Bakersfield local pro Brock Bennett had a successful day at KCRP.  He had early battles in both the 250 Pro class and the Open Pro Class with JP Alvarez.  Early in both races, Alvarez was close to Bennett, but the local knowledge of the track was evident as Bennett was able to consistently gain more time over Alvarez.  The two racers kept the crowd entertained throughout all four motos with their speed on the track, with Bennett claiming 1-1 finishes in both classes. 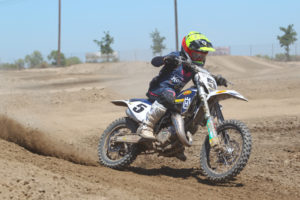 Maddox Temmerman had a strong day on his Husqvarna motorcycles throughout the day as the rider from Visalia took home 5 moto wins during the day.  He claimed his first overall of the day in the 8-11yrs old 85cc class,putting over a minute gap between himself and second place in both motos for 1-1 finishes.  Next up in the 9-11yrs 65cc, he again had a pair of moto victories over Konnor Wolfe, but this time with much smaller margins of victory.  Temmerman’s last class was the 8-12yrs Open class, and in the first moto he claimed the win, but opted out of the second moto, which was the last race of the 100 degree day. 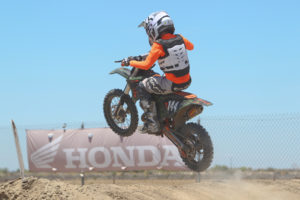 The gate dropped on the 9+yrs 65 Starter/Beginner class, and Dillon Hayes found himself back in the pack on the start.  At the end of the first lap, he sat in third place and was on the charge.  The second lap he was able to pass both the riders ahead of him to take the lead and held on until the checkered flag just ahead of Nathan Blank.  Hayes was able to charge to the lead right from the start in the second moto to take the early lead and hold on for another win in moto 2, again just ahead of Blank.   His 1-1 finishes in that class earned him the overall victory as well as the overall in the 65cc Beginner class where he was able to hold off Blank in those two motos for his second class win.