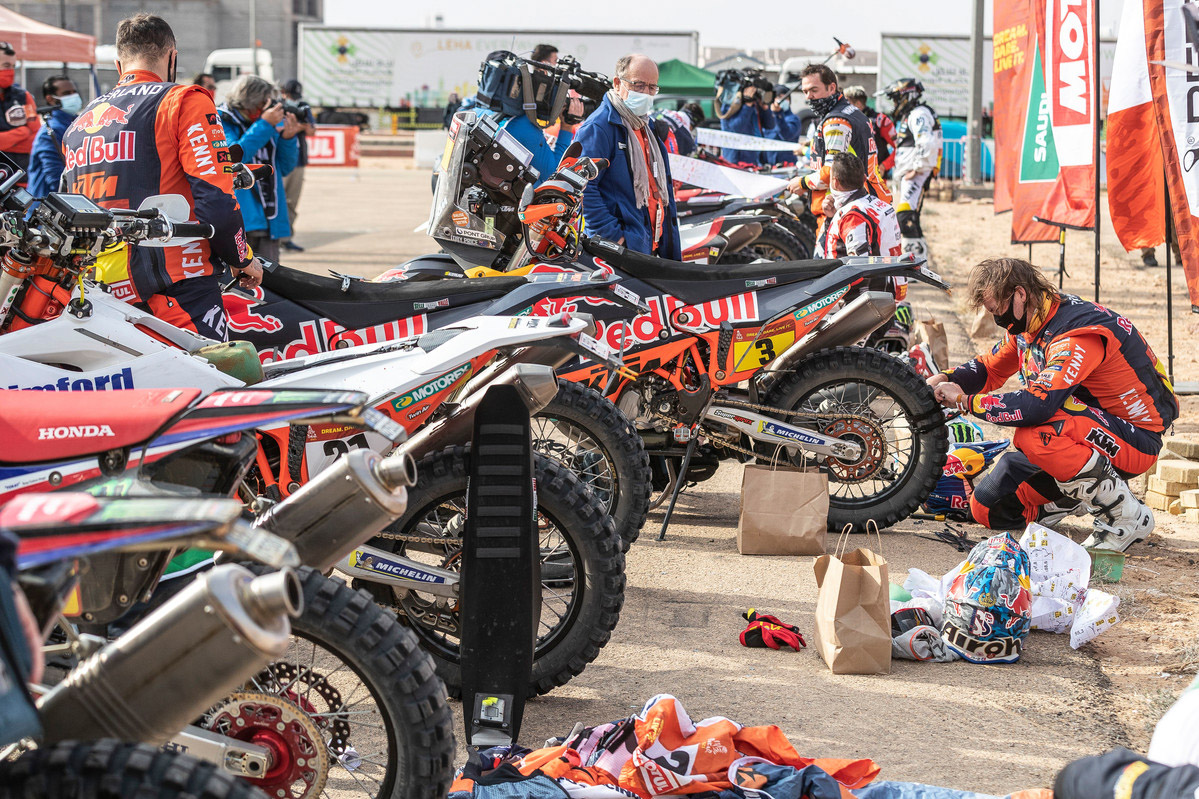 The final leg of the 2021 Dakar Rally is underway. A single rest day in Ha’il gave competitors a chance to reflect on the six stages that took place last week and prepare for the long push to the finish line that they’ll endure through the next week, which includes a two-day marathon run that will test a rider’s skill, bike conservation tactics, and strategy.

Stage Seven was a cold, fast-paced 737 kilometer trip over rough terrain and sand to the northern town of Sakaka. All of the riders were relieved to arrive at the bivouac in one piece, as the “marathon rules” prohibit mechanics from working on the bikes or outside assistance; all necessary maintenance to get the bike ready for Stage Eight had to be completed by the rider.

Defending champion Ricky Brabec is fighting his way back into contention for the overall win. The Monster Energy Honda Team rider had a rough run early in the Dakar, as getting sent out first in multiple stages got him lost or behind others in the General Timing. Brabec’s pace through Stage Seven earned him the day’s win and boosted him higher in the overall standings; he is now eighth overall and trails the overall leader by just under 15-minutes. This win means Brabec will be sent out first on Stage Eight, something he’s tried to avoid over the last few days to lessen the chance of poor navigation.

José Ignacio Cornejo followed teammate Brabec to the finish line for the second-fastest time of the day. This ride, plus consistency and precise navigation in every Stage so far, has put the Monster Energy Honda Team rider into the top spot overall by a tiny margin going into the next long day of racing.

How tiny of a margin? Second place-ranked Toby Price trails by just one second. The Red Bull KTM Rally rider was the best rider through the first six days of racing (he had the top spot going into Stage Seven), and if not for an issue that cost him a few minutes late in the day, he’d certainly still be leading.

Less than 10-minutes split the top-five riders (José Ignacio Cornejo/Toby Price/Sam Sunderland/Xavier De Soultrait/Kevin Benavides) in the current overall standings, which ups the intensity and makes any sort of mistake impactful. Will the field dwindle due to crashes or bike problems, or can this race really go to the final day?

Ross Branch and Skyler Howes were noteworthy riders on Sunday, but for different reasons. Howes finished Stage Seven in third place, and he’s seventh overall, an impressive feat for the BAS Dakar KTM privateer. Ross Branch saw his chance at a top-five finish slip away after he caught a bump, high-sided, and hit the deck. The Monster Energy Yamaha Rally rider spent roughly a half-hour unwinding the bike’s chain from around the swingarm and is now 15th overall.