As the “Ready to Race” bike in the trio of Austrian machines, the KTM 250 SX-F certainly is the most aggressive and exhilarating bike in the family. Compared to the budget-minded GASGAS and low-riding Husqvarna, the KTM is powerful, aggressive, and well, ready to race. 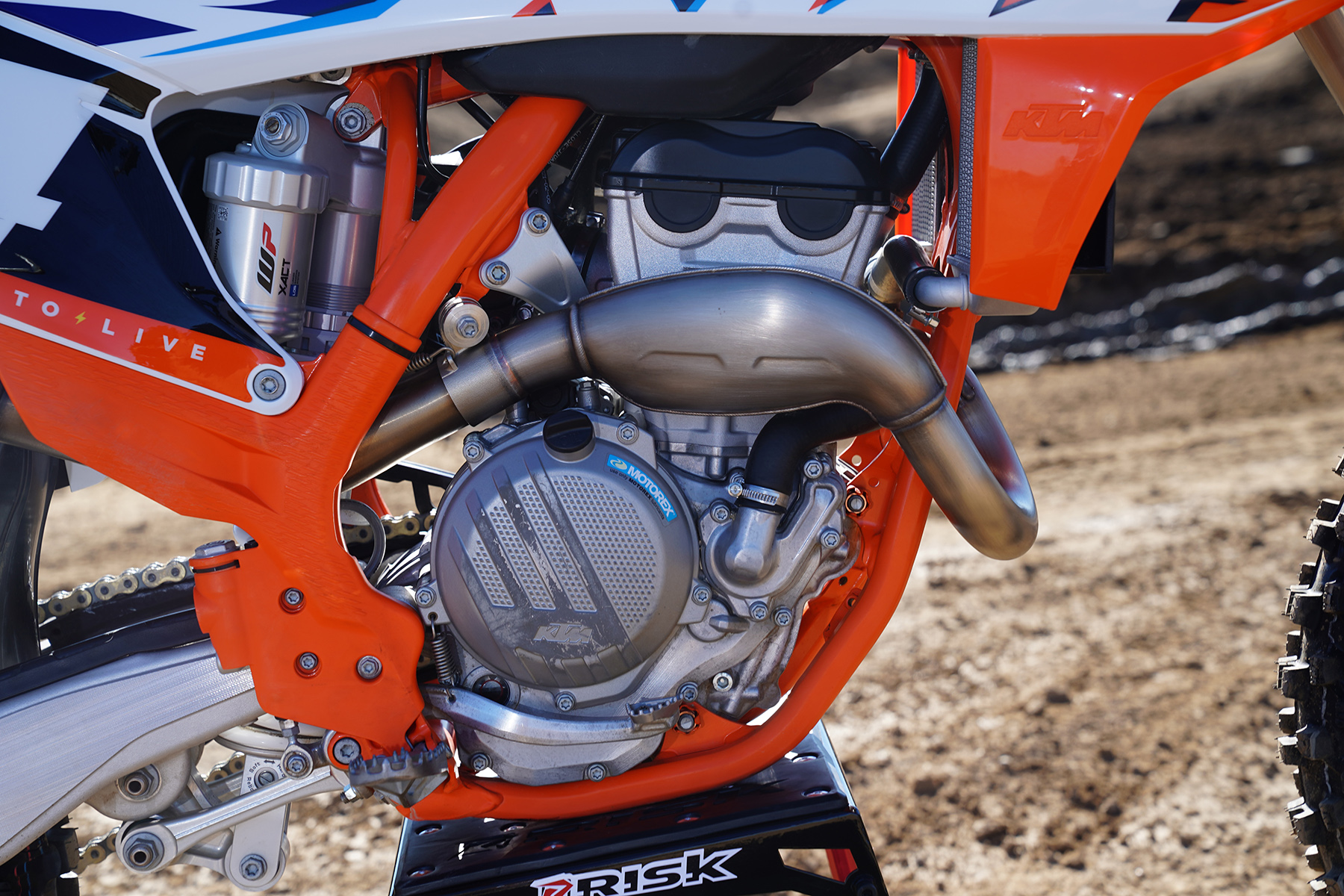 The power of the 250 SX-F engine is a little soft down low, but once the RPM begins to climb, things get exciting! The KTM’s mid-range punch and top-end pull are amazing, especially in the aggressive map two setting, and the bike never seems to flatten out. Oddly enough, the KTM had a notchy feeling transmission compared to the Husky and GASGAS. None of our testers found an ideal condition to utilize the traction control setting on any of the KTM Group machines. 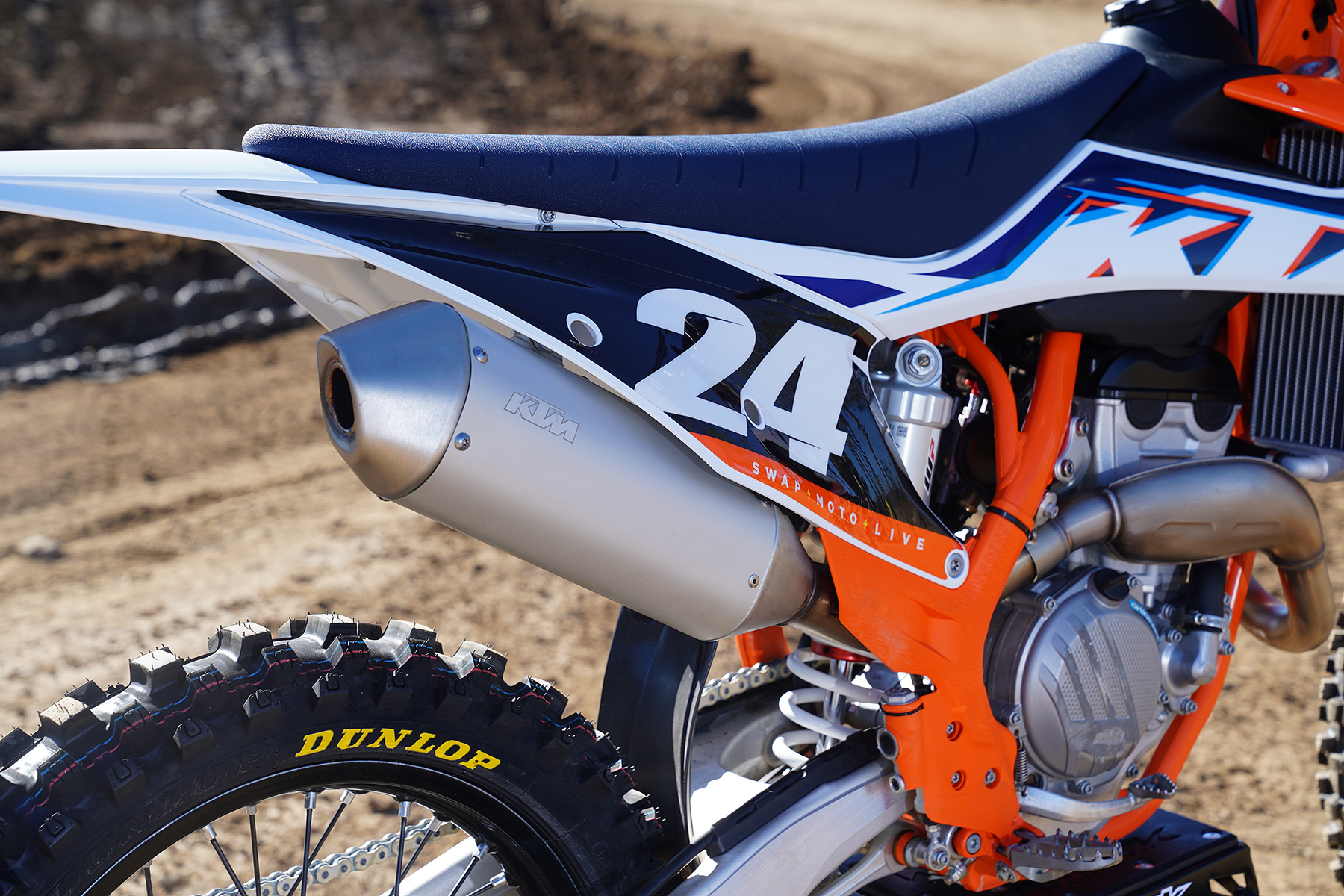 Ergonomically, the KTM has a wide feel at the radiators, but the rest of the bike is super thin and pleasant to maneuver on. The suspension settings of the orange bike are firm and hold up well with good balance, but the front end does lack a bit of comfort compared to some of the bikes with mechanical springs. Nevertheless, almost every test rider noted that the harder they charged on the KTM, the better it worked. Cornering on the orange machine is superb, and straight-line stability at speed is excellent. 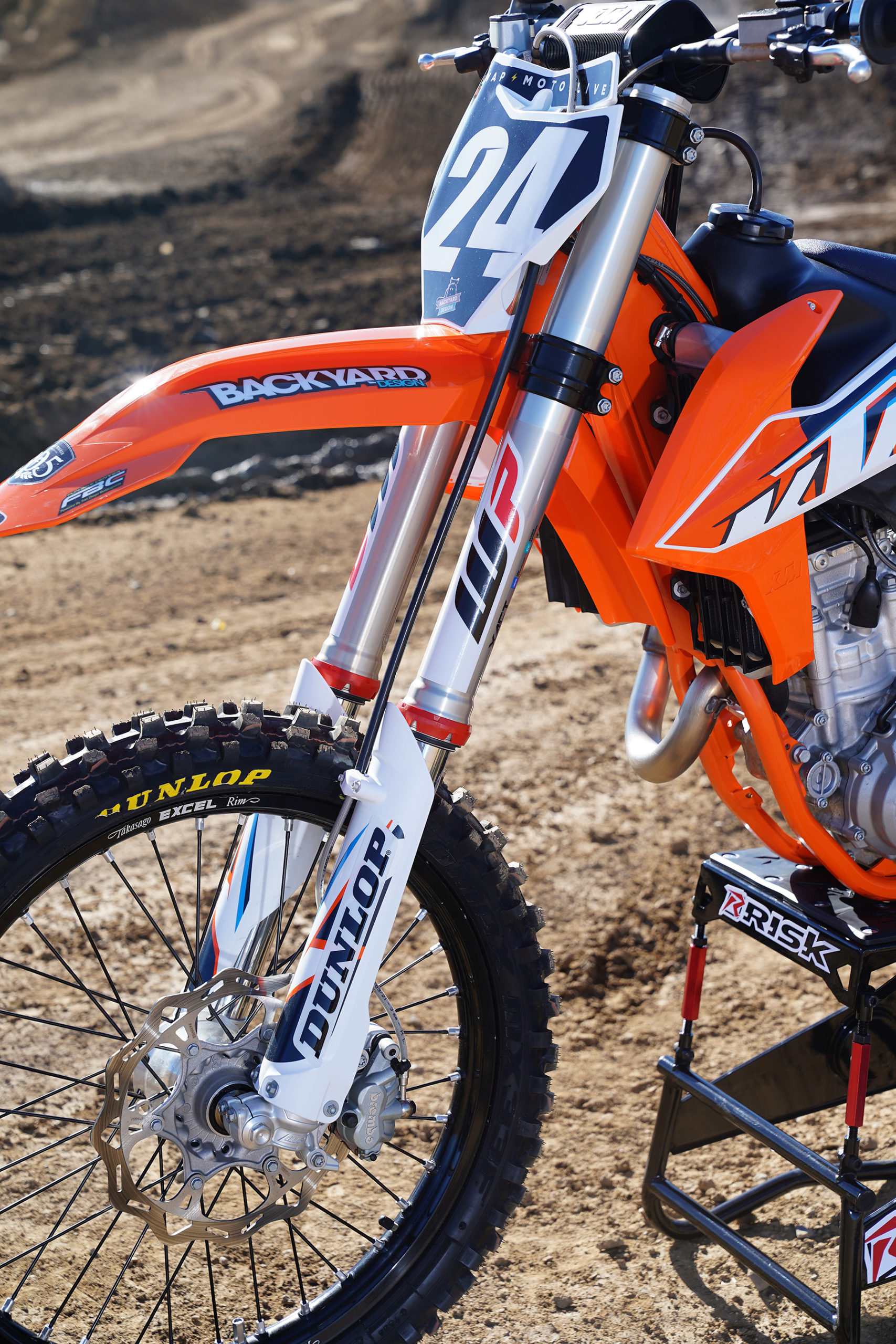 The Brembo brakes on both ends are simply amazing, and the performance of the hydraulic clutch is equally impressive, as it offers a great feel and modulation but resists fading when under abuse. Like the Husqvarna, the KTM comes with an optional vented airbox cover. The performance gains it yields warrant exclusive use, save for extremely wet conditions. 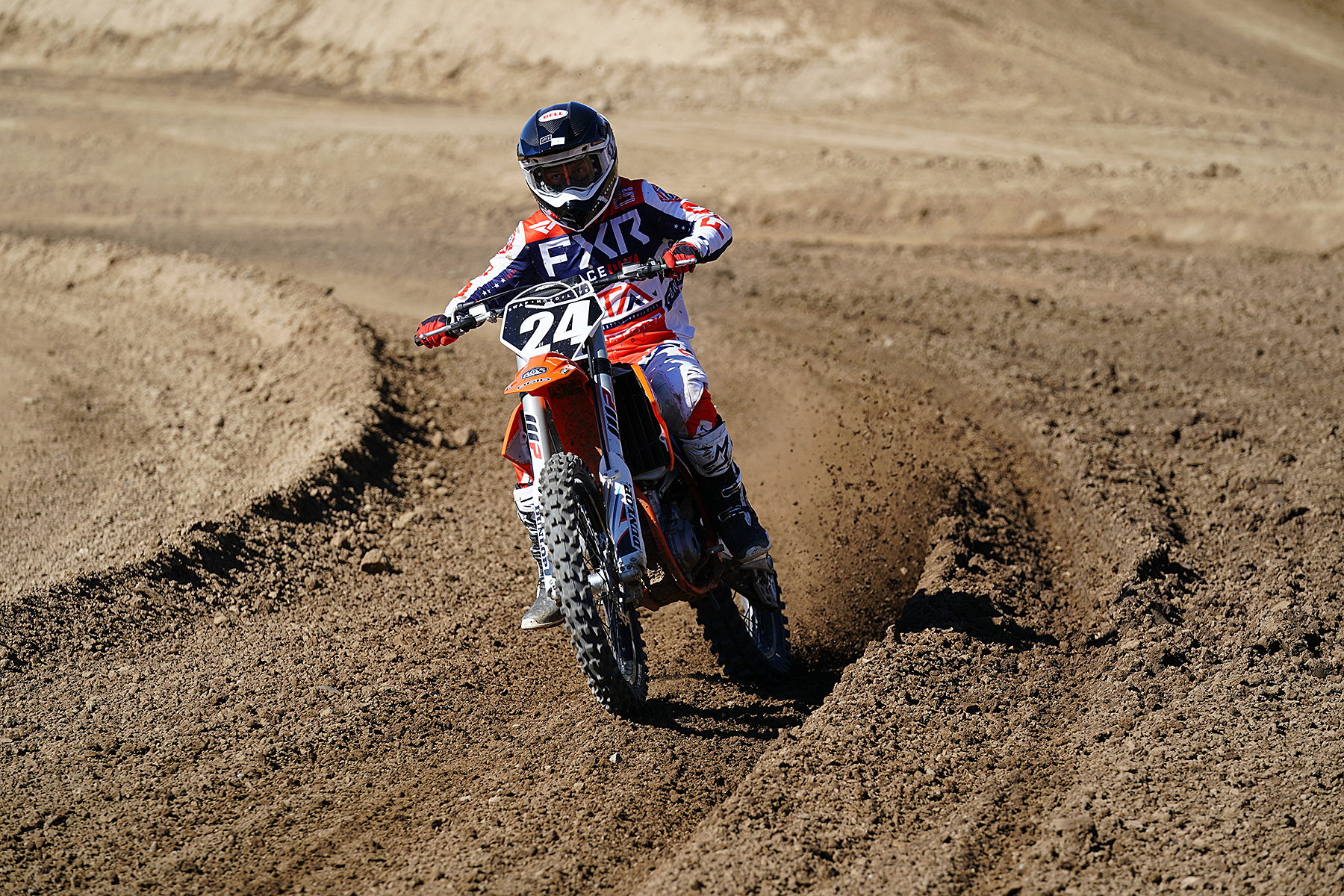 “I feel the KTM is the fastest bike in the shootout, and especially so in map two. I even opted for map one at some tighter tracks as it was too aggressive in the quicker setting. Love the clutch and controls.” – Humberto Baca

“The KTM handles very well, though it does have the most rigid feel of the Euro bikes. The bike is stable at speed and corners quite well, and the suspension has great bottoming resistance. I could definitely race this bike in stock condition.” – Humberto Baca 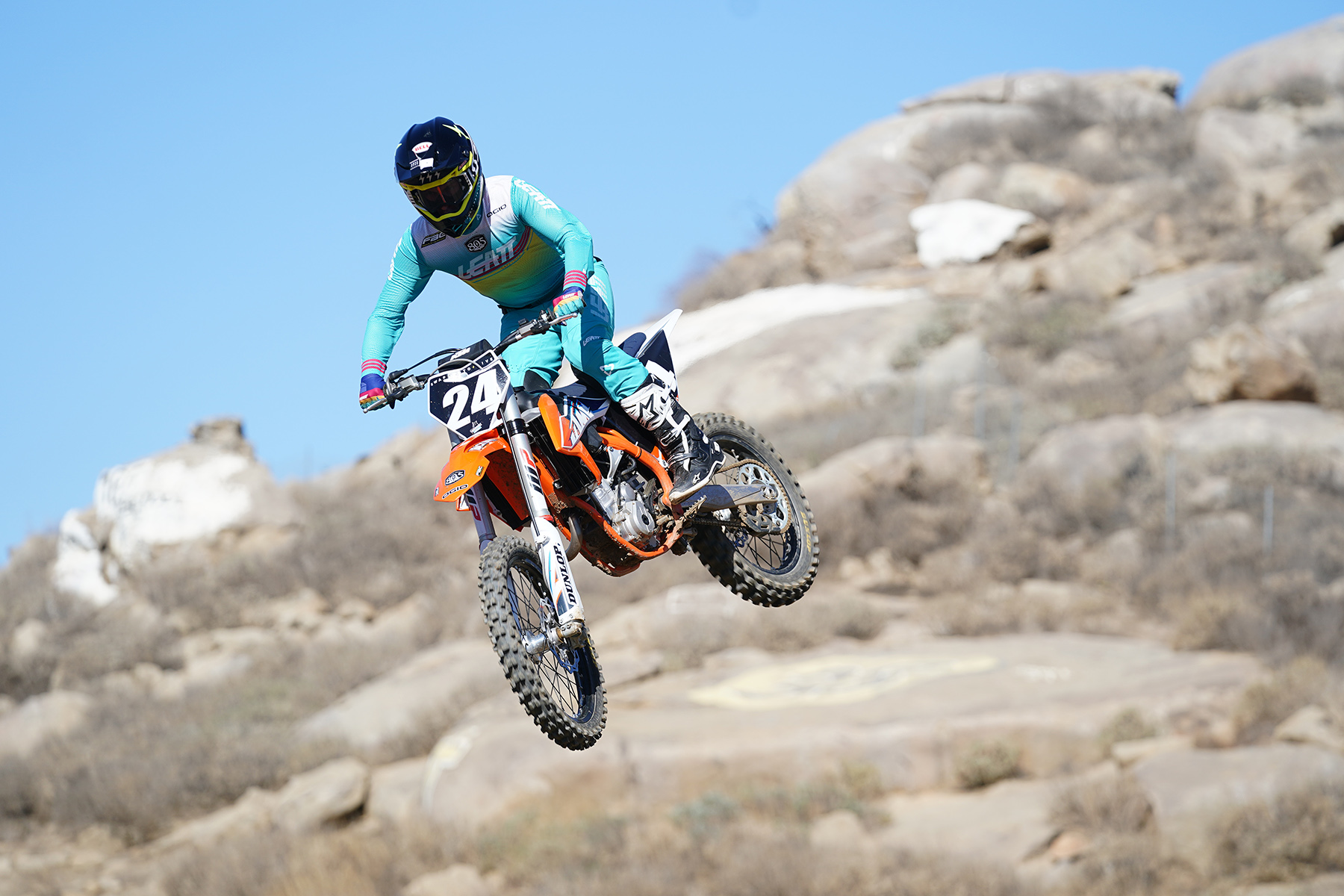 “The KTM has my favorite motor amongst the Austrians, with a decent low-end and really great mid-range to top-end that seems to keep revving forever when in map two. The bike could use some more low-end power when compared to the Yamaha or Kawasaki.” – Chase Curtis

“I had trouble getting the bike to settle and tip into corners. It just doesn’t seem to want to lean into the turns for me, in spite of the numerous suspension changes I tried. I like the suspension performance in bumps and landing from jumps, but overall, I prefer the Husky’s low stance much more.” – Chase Curtis 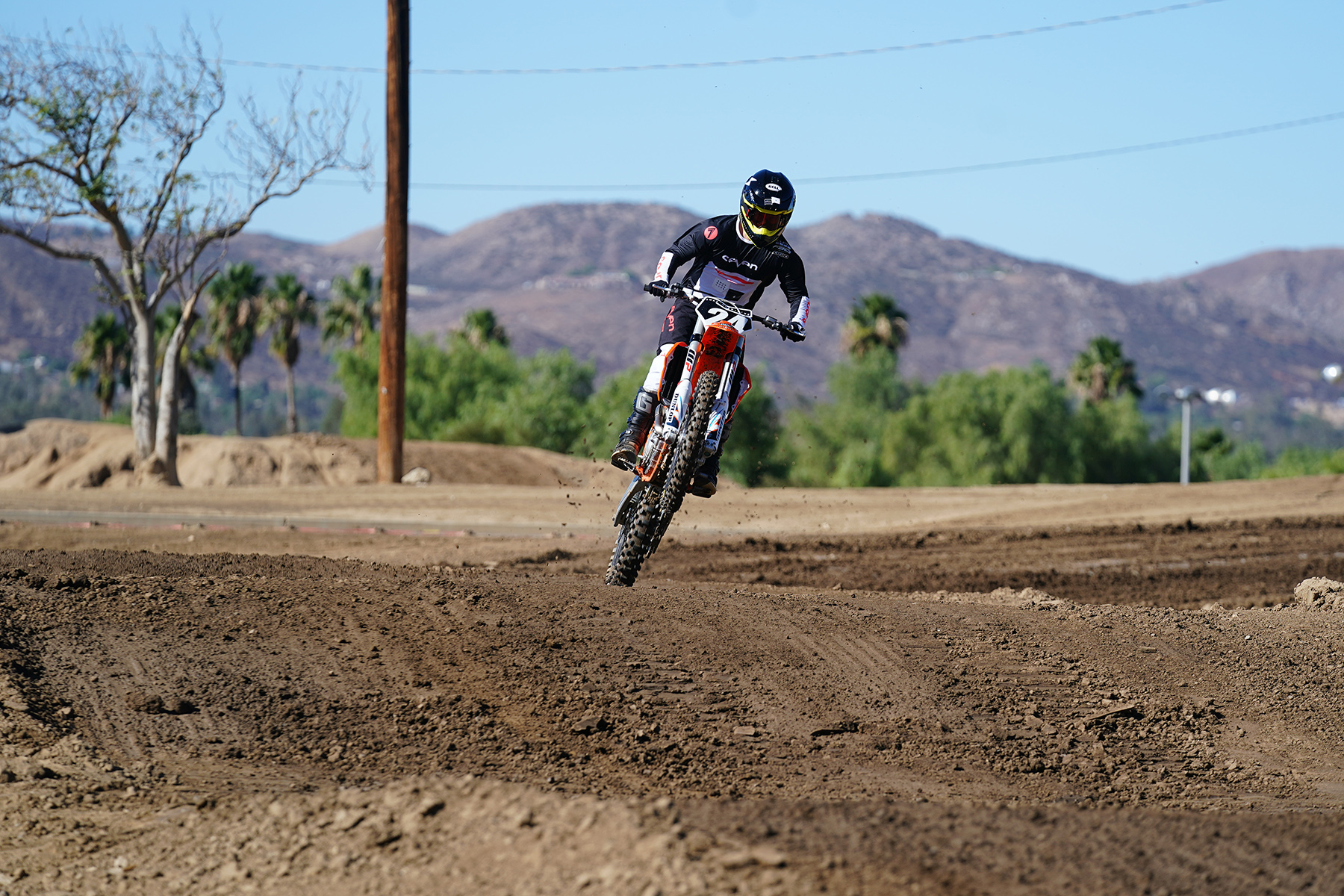 “The KTM is fast as hell from mid to top, but the bottom end is lazy. I liked map one when the track was fresh, but when things got rough, I preferred map two much more. The engine is too fast for the stock chassis setup, I believe, as the suspension is unsettled.” – Kordel Caro

“I don’t get along with the air fork, and especially so on the KTM. When I land hard from a jump, the front end won’t stick to the ground as it tends to rebound and unload with no control.” – Kordel Caro 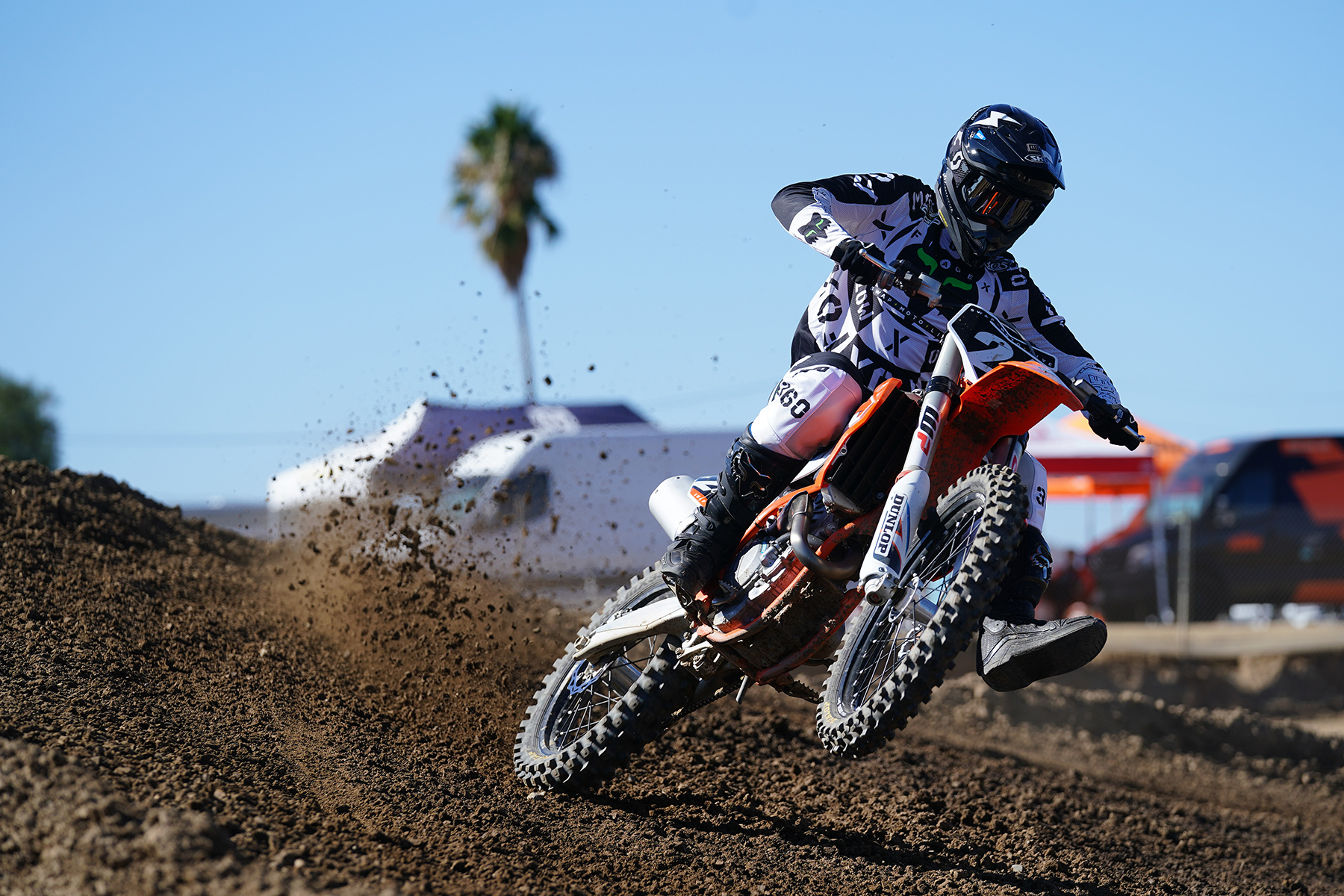 “The KTM engine is clean yet modulated down low, strong in the mid-range, and huge up top. The KTM likes to rev and makes its best power after most bikes have already needed a shift. Power is effective down low, but more torque would be excellent.” – Pat Foster 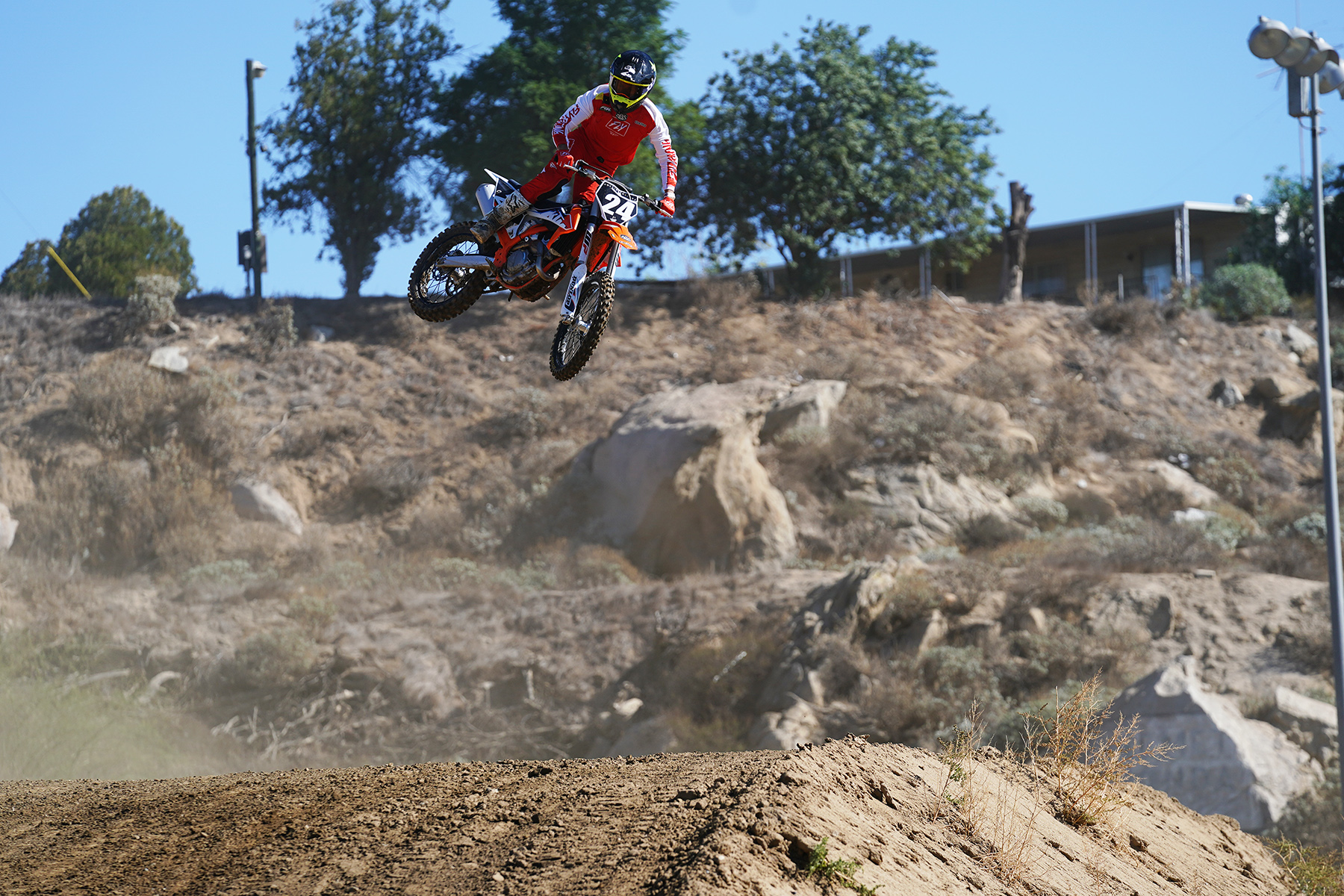 “The KTM lacks some low-end power, but it pulls hard in the mid-range and top-end with a free-revving feel that I like. The KTM is, to me, one of the most competitive 250s in stock condition and it can be race-ready at the highest levels with a few mods.” – Rene Garcia

“The air fork is pretty good, and the KTM suspension setup is the best of the three Euro bikes. I raced a KTM this year, and the first thing and best performance mod I did was converting the air forks to KYB mechanical spring internals.” – Rene Garcia 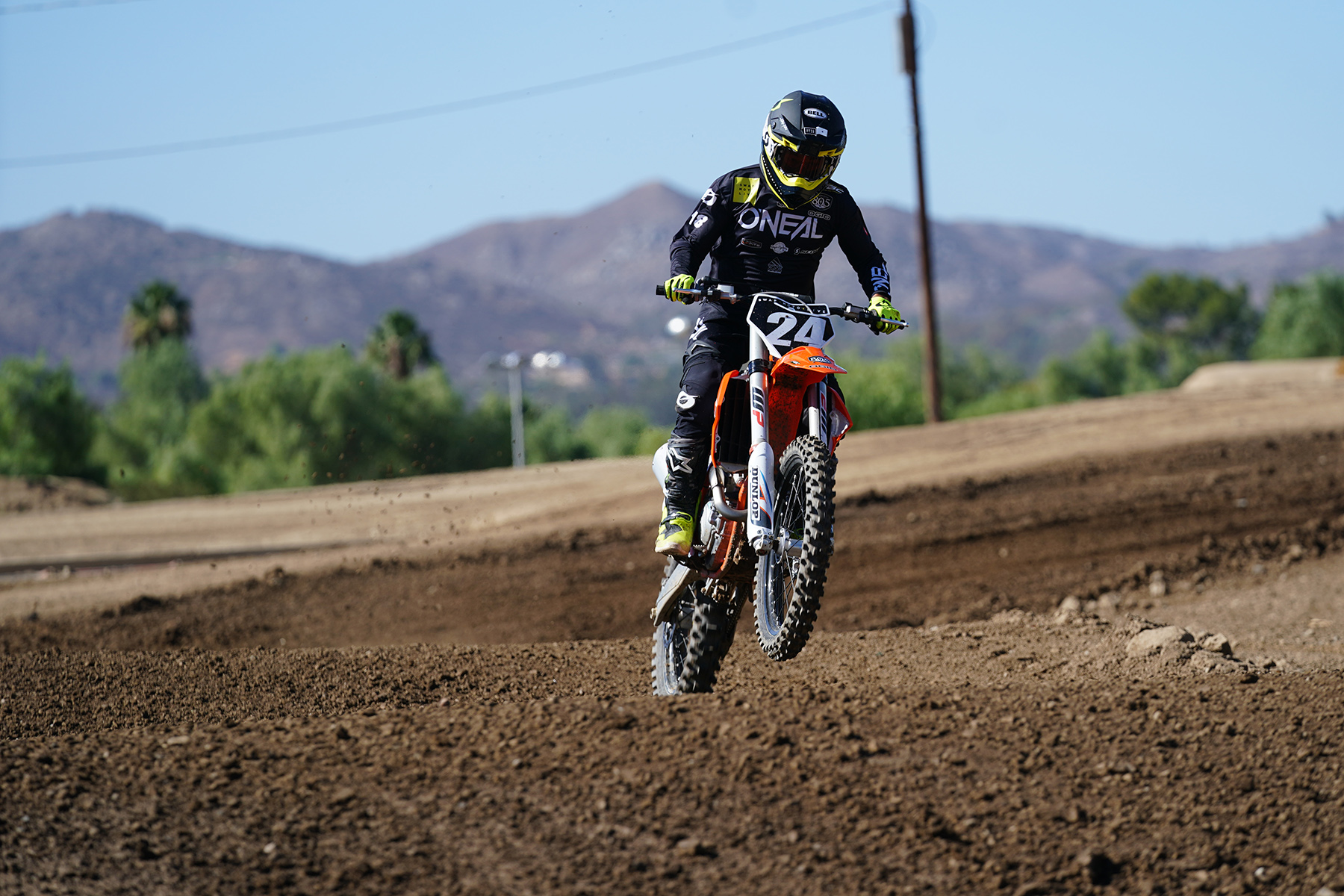 “For the first time ever, I preferred the KTM 250 SX-F over the Husqvarna FC 250. In the past, I’ve felt that the Husky was easier to ride, but this year the exciting powerband and aggressive feel of the KTM won me over.” – Donn Maeda

“The KTM has the stoutest feel of the Austrian bikes, both in the chassis set up and suspension performance. The harder you charge on the KTM, the better it seems to work.” – Donn Maeda