Dean Wilson | “What You See Is What You Get” 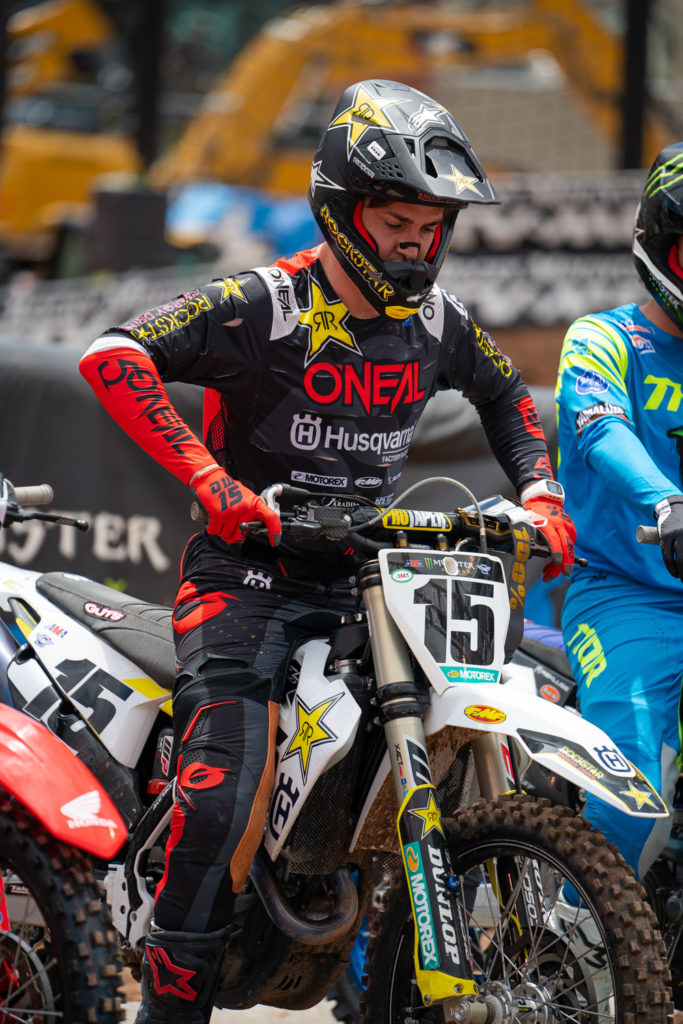 It’s always good to spend a few minutes talking with Dean Wilson. The Rockstar Energy Husqvarna Factory Racing rider has gone through his share of trials and tribulations, no doubt, but he manages to take something positive away each time. Wilson came into the 2020 race season far from full strength (after his 2019 Monster Energy Cup hip injury, it was a surprise he was even on the line at Anaheim One), found a little more speed and fitness as the weeks went by and came out of the quarantine a new man. A podium finish at the final round was a nice reward for months of work that Wilson put in and now he’s ready for the start of the summer ahead.

What’s happening? How has everything been?

It’s going good! After Salt Lake, we did some testing with the team in California, but now we’re back in Florida and we know what we’re doing and have the Nationals coming up. We’re working our butts off out here, it’s so humid and it takes a couple of weeks to get climatized, so for the first couple of weeks you are dying. But now I’m feeling pretty good again and everything is going good.

I didn’t get the chance to talk to you much in Salt Lake City, but you came into your own there, especially after the start of the season and then the break. How were those seven races for you?

The seven races were not too bad. I had a few good finishes and a couple of bad ones, but it was good to finish off with a podium. In every qualifier, I had really good speed and I was always up there. I won a Heat Race, which was cool. I just struggled with my starts, that was the biggest thing. In the last one, I got the holeshot and led for six or seven laps, so that was cool. To finish off on the podium from when I barely made it to the beginning of the season from my broken and dislocated hip, I made it happen. One of my goals was to be there. I knew that I wouldn’t be up front right away, that it would take some time, because I was still healing. I was really far behind everyone and I started to come into my own just before the quarantine. Going into Salt Lake, I was feeling pretty good again and my speed was back. I struggled with starts, so to get that holeshot, lead some laps, and finish third was good for me. 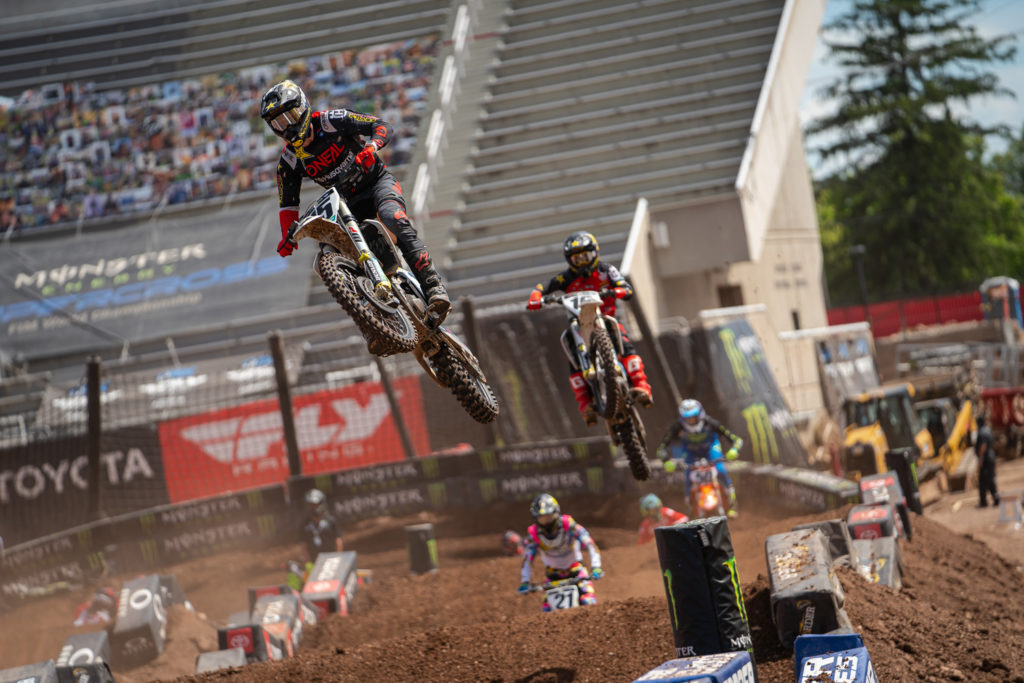 “In the last one, I got the holeshot and led for six or seven laps, so that was cool. To finish off on the podium from when I barely made it to the beginning of the season from my broken and dislocated hip, I made it happen. One of my goals was to be there. I knew that I wouldn’t be up front right away, that it would take some time, because I was still healing.”

The Heat Race win was a huge high point for you that night, but you were kind of bummed because the Main Event didn’t go as well. I was stoked for you, because you did good. Is it hard to not get caught up in the highs and lows right now?

Yeah, you just want to maintain a good balance. I won the Heat Race that night and was struggling in that Heat Race, so I made some bike changes just before the Main. And I went the wrong direction because the Heat Race and the Main Event were almost like two different tracks, so I struggled in the Main Event and I couldn’t hang on to the bike. It was my own mistake, I tried to make my bike better and I went the wrong way. That’s part of the game, so lesson learned.

Now you’re back in Florida and you have a good program going with the Lawrence brothers and Jason at Chad’s old place. How did all that come about?

It’s kind of funny, because I was at the 83 Compound first, riding with Jalek (Swoll). I had that arranged when we were on the West Coast, so when we went to the East Coast that was the compound I was going to train at. The Lawrence boys came in during quarantine and then Jason just recently joined. We have a good group of riders and really good people around. We work super good together and push each other, so it’s a cool chemistry.

That’s four kindred spirits, four guys that are going to keep it lighthearted between you, Jason, and the brothers. I would imagine there’s a lot of joking during those rests.

A little bit. We have fun and have a good laugh, but it’s still serious. We’re always trying to help each other when we’re struggling on the track and are trying to be better riders all-around. Doing good on the weekends is what it’s all about. We have a good program, no egos or BS, we just work hard and enjoy.

When Jett got his podium in Salt Lake, he came right over to you on the starting line and talked. How is it to have two younger guys that you can share advice with?

They’re pretty switched on already, honestly. Hunter is a really good 20-year-old, probably more mature than me, and he’s a really good kid. I try to give him tips for Supercross, because he had never really done it, so I tried to help him out with some things. Jett is so talented and he’s a rookie, so he’s really good too. We all like to push each other, but Jett is that young kid that hates to get beat and it’s pretty funny. 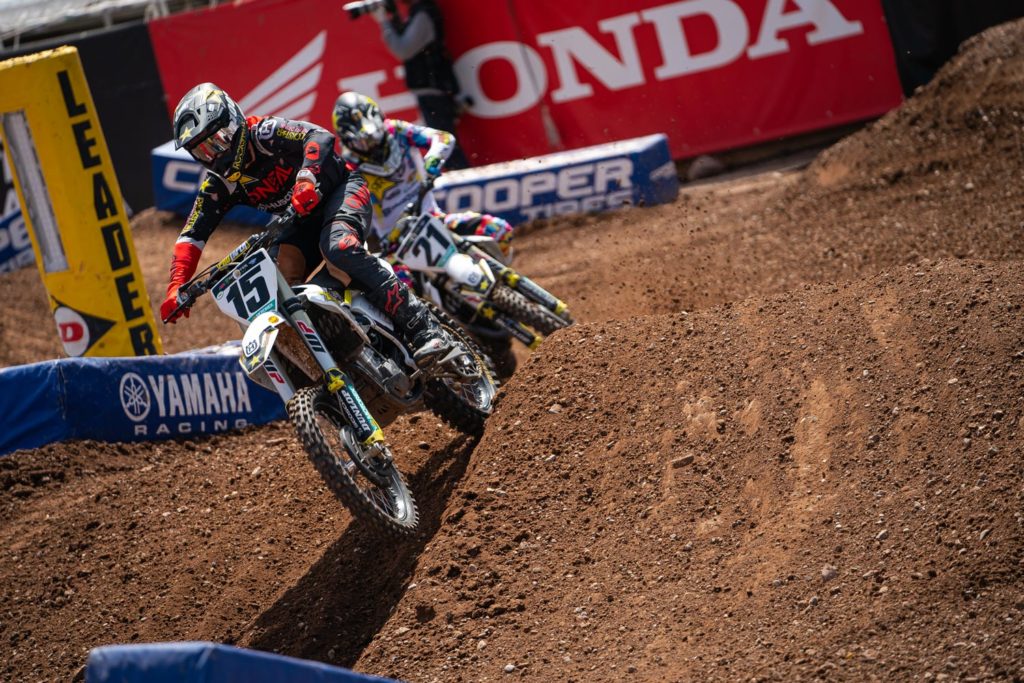 Wilson on training with teammate Jason Anderson and the Lawrence brothers: “We’re always trying to help each other when we’re struggling on the track and are trying to be better riders all-around. Doing good on the weekends is what it’s all about. We have a good program, no egos or BS, we just work hard and enjoy.”

These next few weeks are big, the last push before the Nationals start. Is it crunch time for you or will it not be so bad because of the break?

These next couple of weeks are important for me, just so I can get the best I can before the first round. We’re going to have an interesting first race at Loretta’s, which is tight for a 450, but it’ll be the same for everybody. Loretta’s is always really rutty, so I’m focusing on my corners and my ruts. I’m really working on my riding right now, breaking some bad habits, and hopefully, we’ll be good going into the first round.

With everything going, this has really been your breakout year. You’ve done videos and opened up, and I think that people identify with you. I’ve always liked the way that you’ve carried yourself, so how is it to see the public accept you becoming yourself?

I think that’s what I’m most proud of. I’ve always been myself and some people like it and some don’t, but I’ve never been the cookie-cutter type. I tried it for a couple of years, but I always perform my best when I’m myself. What you see is what you get, so I’m stoked where I am. I’ve worked hard to get where I am, to be in the mix after all these injuries. I want to get in a good offseason this year so I can go into Supercross and everything completely healthy.

2020 Salt Lake City Supercrss Three | How Was Your Weekend