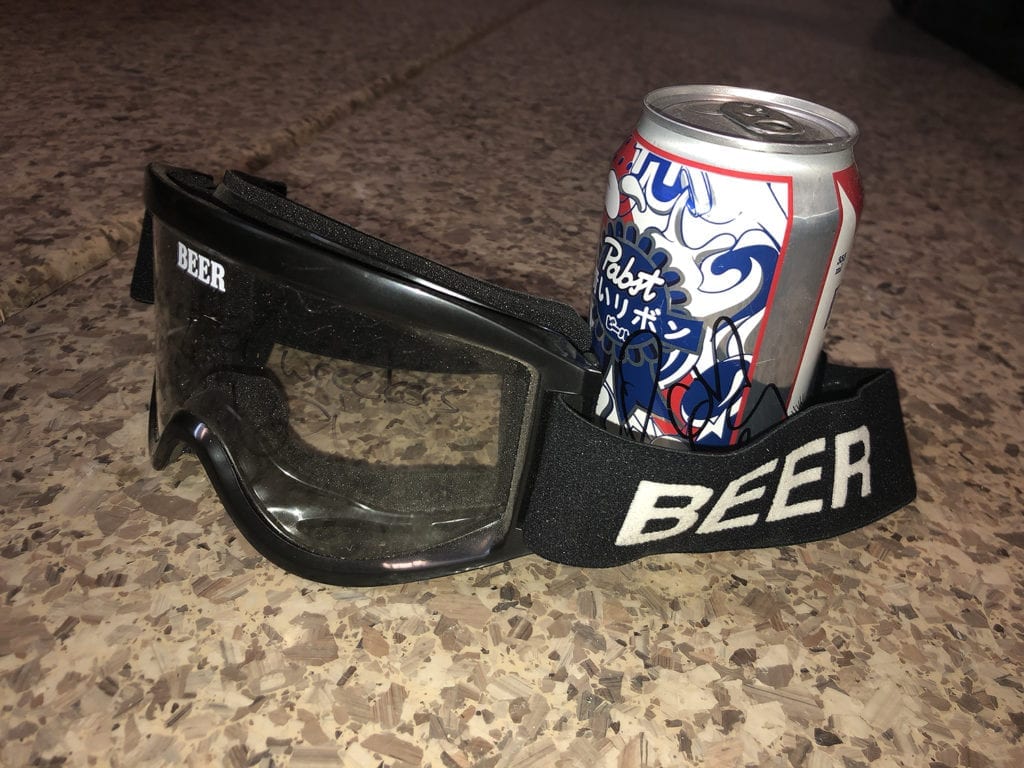 Over two decades ago, my friend Chris Cooley and I were playing three-par golf at Arroyo Seco Golf Course in Pasadena one night, and we came up with a get-rich-quick scheme to produce cheap, plain-wrap goggles with BEER written on the strap. Unless you were raised out in the country with no access to social media or television you should know well the term, but just in case you’ve never heard someone say “beer goggles,” here is the official UrbanDictionary.com definition…

Anyway, we continued to joke about our idea for years but never seemed to do anything about it. Until around 2009, when Cooley and I had a falling out of sorts (we’re fine now!) and I found myself motivated to bring the idea to fruition. After making calls to Scott and Smith to see how much it would cost to produce Beer Goggles, I found myself discouraged by the expense. The idea was to produce a cheap goggle that could be sold for $20 as a novelty in gas stations, bars, swap meets…you name it. Then along came my buddy, Rich Taylor. RT had launched EKS Brand Goggles one year earlier, and when I told him about my idea to make Beer Goggles, he sprung into action and helped me source a plain black goggle with simple BEER lettering on the strap. The price was exactly where I wanted it to be, and I ordered about $5000 worth. Taylor was so excited about the idea, that he had his designer draw up some more intricate versions that looked like Heinekin, Coors, and Budweiser cans. I told him that producing quality, functional Beer Goggles for motocross use didn’t interest me, but that he could have at it if he so desired.

My Beer Goggles came out exactly as I had imagined they would, and I built a crude web site and sold them for over twice what I paid for them. The online orders didn’t blow my socks off, but it was pretty easy to sell a few pairs out of my truck every time I went to the track. Around Thanksgiving, I recruited a buddy of mine who was really into the Glamis scene to take a bunch of goggles to the dunes with him. I was certain that he would come back with thousands of dollars and an empty box, but he was shut down almost immediately by a park ranger. Apparently, you needed a permit to vend, and that was something that had to be applied for months in advance.

Selling my novelty Beer Goggles proved to be more difficult than I thought, and I actually ended up selling quite a few back to Rich when I grew tired of sitting on my inventory. The high-end Beer Goggles were selling quite well, and Rich was able to get dealers to buy into my econo versions with more success than I ever had. I guess that’s the difference between a legit goggle company with a sales force and a magazine editor trying to moonlight! Haha!

In the end, I made all of my money back and turned a decent profit, but more than anything I was blown away by the fact that Beer Goggles didn’t blow up and take over the world. You can still buy the nice versions by CLICKING HERE, but the pair you see in the photos posted in this feature are legit, the very last pair of the OG Beer Goggles that exist. 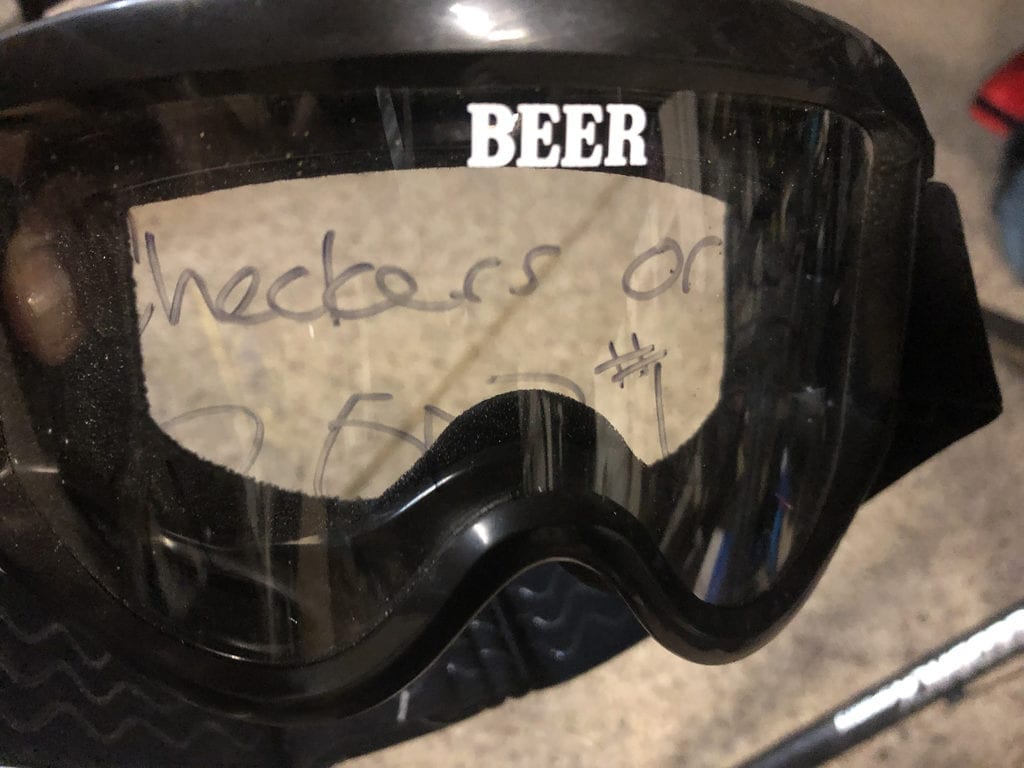 Last October, Ronnie Mac came on to the Swapmoto Live Show to film an episode with me, and I pulled the Beer Goggles off my wall and had him sign them. “Checkers or Wreckers, Ron #69” is written on the lens with a black Sharpie pen. Ron couldn’t believe that I was involved with the creation of Beer Goggles some 18 years earlier, especially since he now has a really trick signature pair of Beer Goggles, produced by EKS Brand.

That afternoon as we filmed the SML Show, Ronnie went through seven or eight of the PBRs that I had in a cooler for him, but I had him sign one of the cans that he didn’t finish, to go along with my pair of Beer Goggles. Tonight when I ventured into my garage to look for material for this post, I decided that a die-hard, red-blooded American Ronnie Mac fan deserves to have this set of beer accessories. That said, comment below with your best beer goggles story and I’ll send this stuff to the author one that is the most amusing! Good luck! – Donn 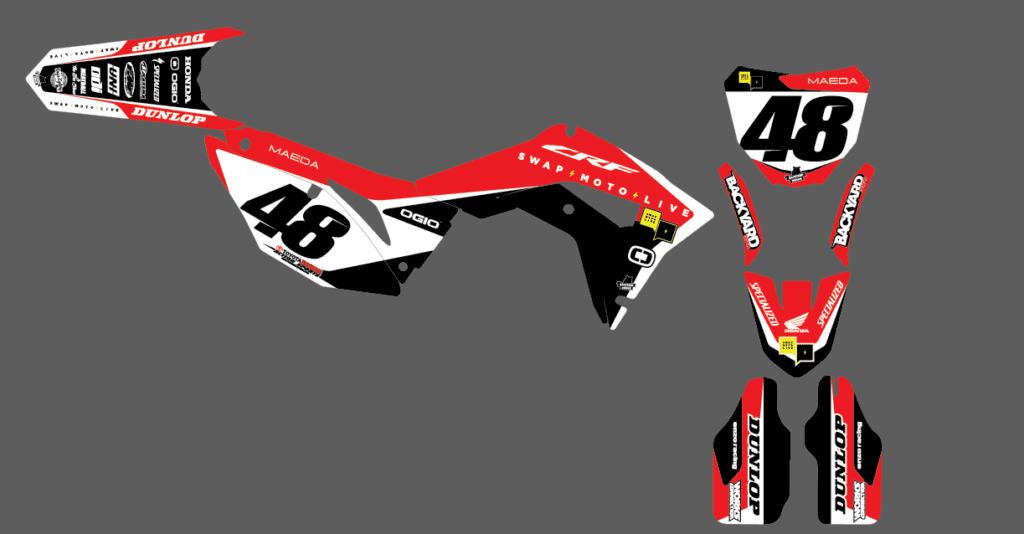 Our 2020 450 Shootout is coming to an end this week and do you know what that means? It means that we can start testing aftermarket stuff on them, racing them, and fine-tuning them to suit our individual preferences! Though we start getting new bikes as early as July, we need to keep them stock and in great condition so that they can be used in our annual comparison once all of the different bikes become available.

I really like the way the Honda CRF450R produces such versatile power, thanks to its three EFI maps and three traction control settings, and I am anxious to try several modifications and aftermarket accessories on it. Now, you can’t line up at the races without your proper number on your bike, right? And you can’t race a series that bears your name without graphics to match! Thankfully, our friends at Backyard Design whipped out this design for our CRF450R test bike in a few hours in preparation for the upcoming AMSOIL Swapmoto Race Series Fall Classic! I can’t wait to see the finished product! Stay tuned!