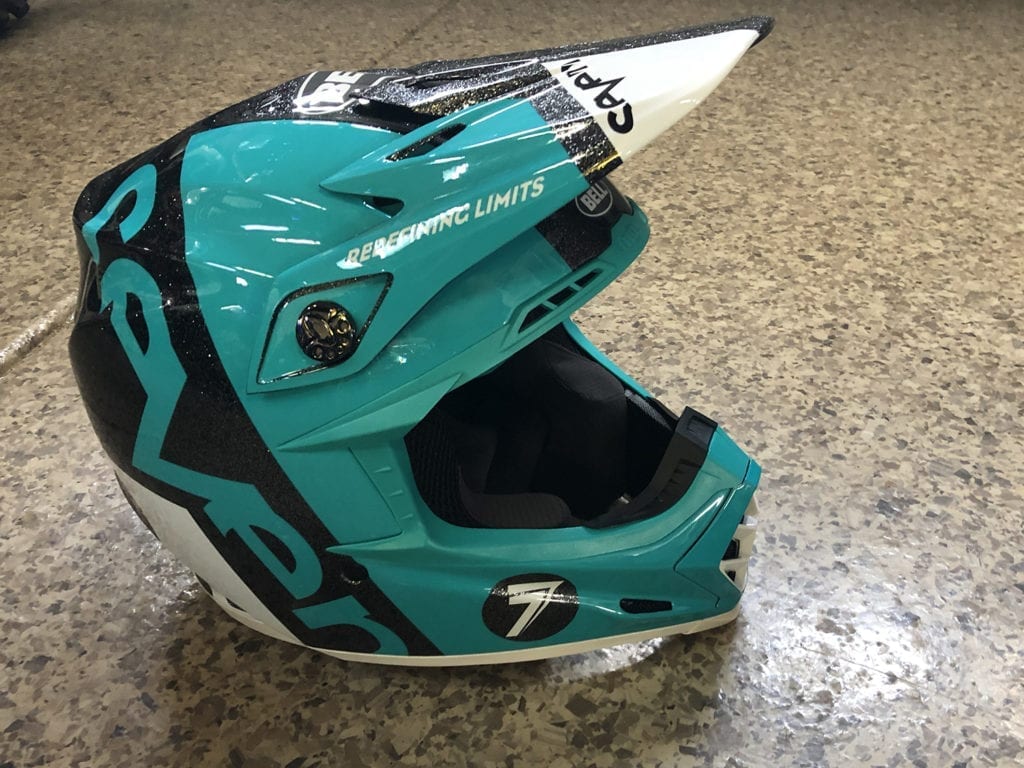 These days it seems like most apparel manufacturers have completed their line by producing their own helmets, boots, and goggles so that they can offer absolutely everything that a rider could want or need. Back in the day, this was never the case as apparel makers specialized in apparel, helmet manufacturers concentrated on helmets, and so on and so forth. One brand in current times that stays solely focused on producing riding apparel is Seven MX. Founded and owned by James Stewart, Seven MX changed the way we all think about high-end motocross apparel with its Zero line of lightweight, athletically fit, compression riding gear. Though Seven MX does not produce a helmet, boot, or goggle, the brand has aligned itself with two premium brands in the boot and helmet categories: Gaerne boots and Bell Helmets.

In the 2020 offerings from Bell Helmets, there are eight different Seven MX collaborations: four in the premium Moto 9 Flex category, and four in the mid-level MX-9 Mips line. According to our friends at Bell, the collaboration has proven to be quite successful, as the Seven MX graphics are some of the best-selling and best-looking in the catalog.

Each season, the team at Seven MX mocks up several different designs and colorways and the most voted-on are produced in single quantities by Bell for final evaluation before they are put into production for sale. This morning, the SML crew stopped by the Seven MX headquarters in Murrietta, California, for a project meeting, and we spotted several new helmets in one of the offices. This teal/white/black sample immediately caught our eye, as we are massive fans of the teal color that Seven MX most recently popularized in motocross. 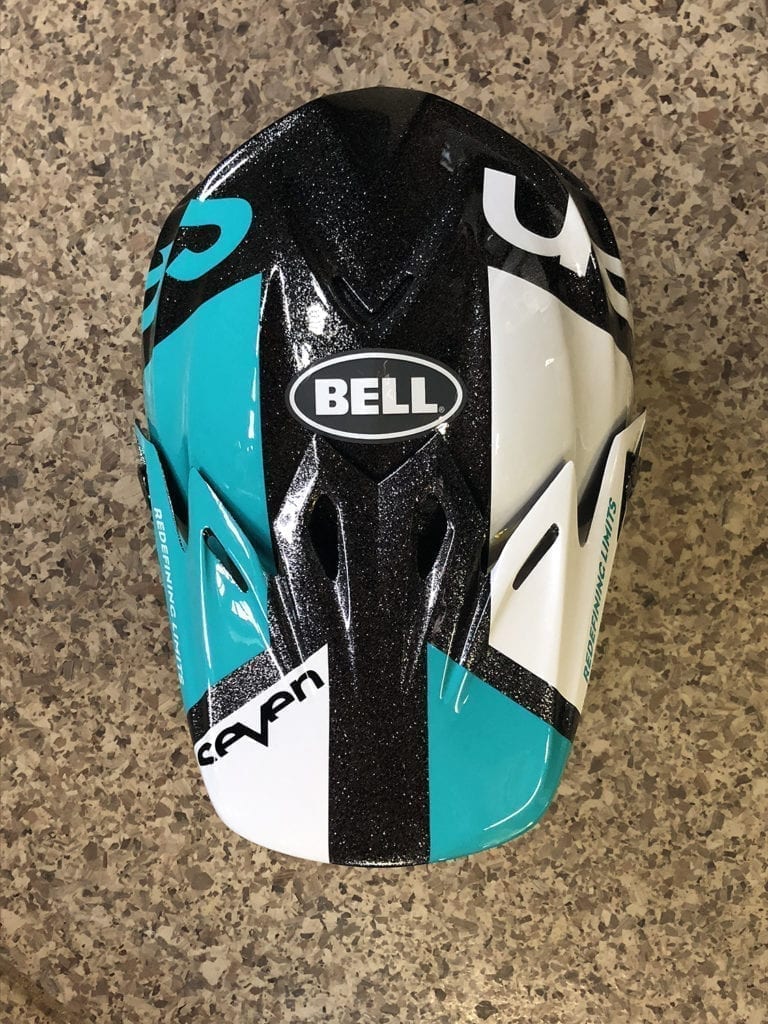 One of the things we like most about the new design is its asymmetrical color layout: the left side is primarily white, while the right is primarily teal. The black portions of the design are metallic and give the graphic scheme depth, while the teal eye-port molding is quite distinctive. Imagine our surprise and shock when we were told that this wasn’t one of the versions that made the cut for production! 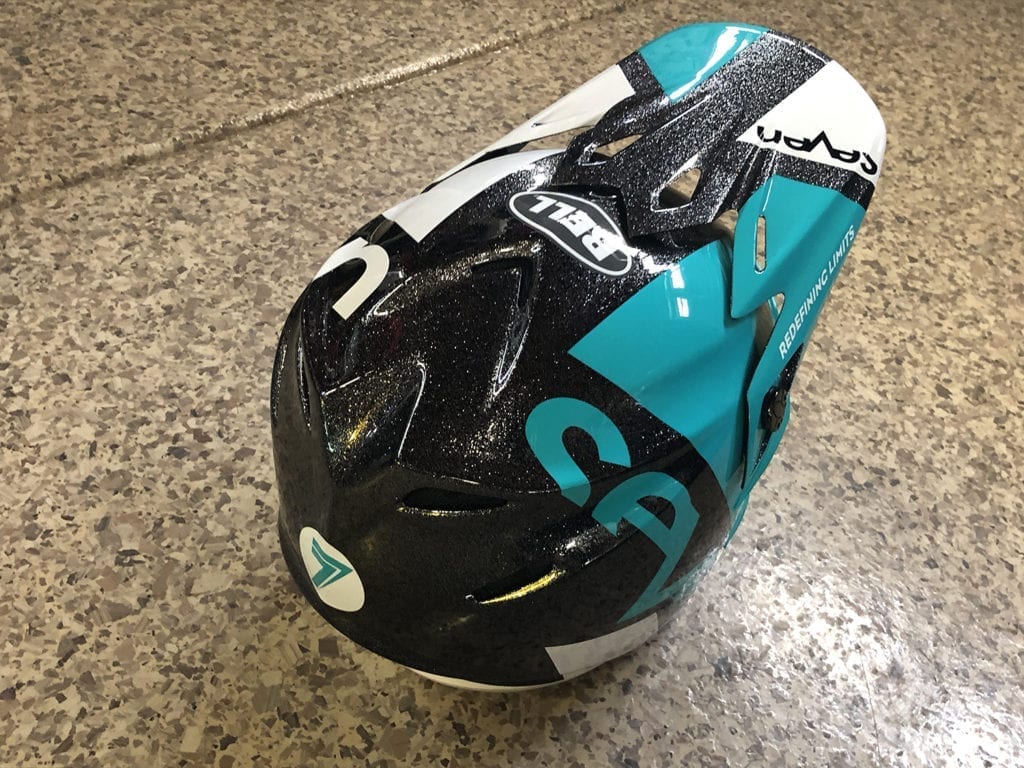 Since the sample is of full-quality and carries all of the certifications and safety features as a production helmet, I began to concoct a plan on how I would sneak the sample lid out of the office without being seen. But, since honesty is the best policy, I admitted that planned to steal the team sample. To my surprise and delight, my man Roger Larsen said, “You like it that much, Spokez? You can have it!”

Alas, it may not be an old school garage find, but this badass one-off Seven MX Bell Moto 9 MIPS is most certainly in my garage! Thanks, Roger!

Do you think that this version should have made the cut for production? Comment below! 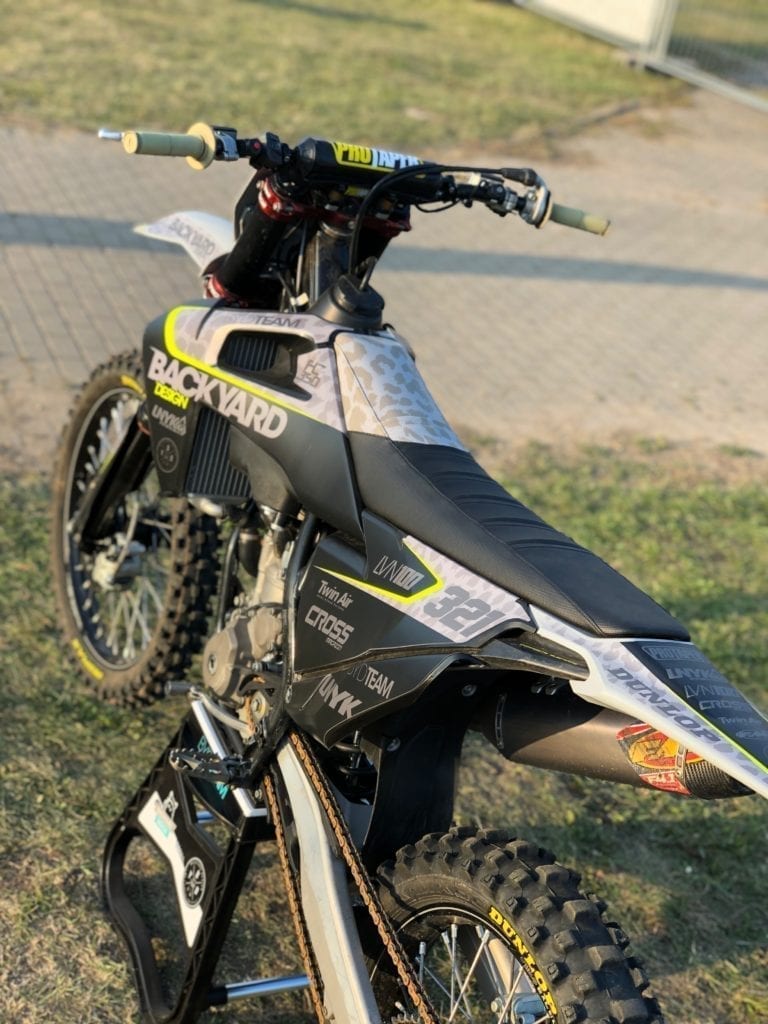 The guys at Backyard Design USA are up for any challenge when it comes to making your bike or helmet look cool, as they can help you create the graphic kit or helmet wrap of your dreams in only a few easy steps. We have been blown away by the ease in which BYD kits apply, and especially so on the Husqvarna, which can be a challenge when it comes to the split side panels. Backyard Designs’ patterns and material set them apart from the rest!