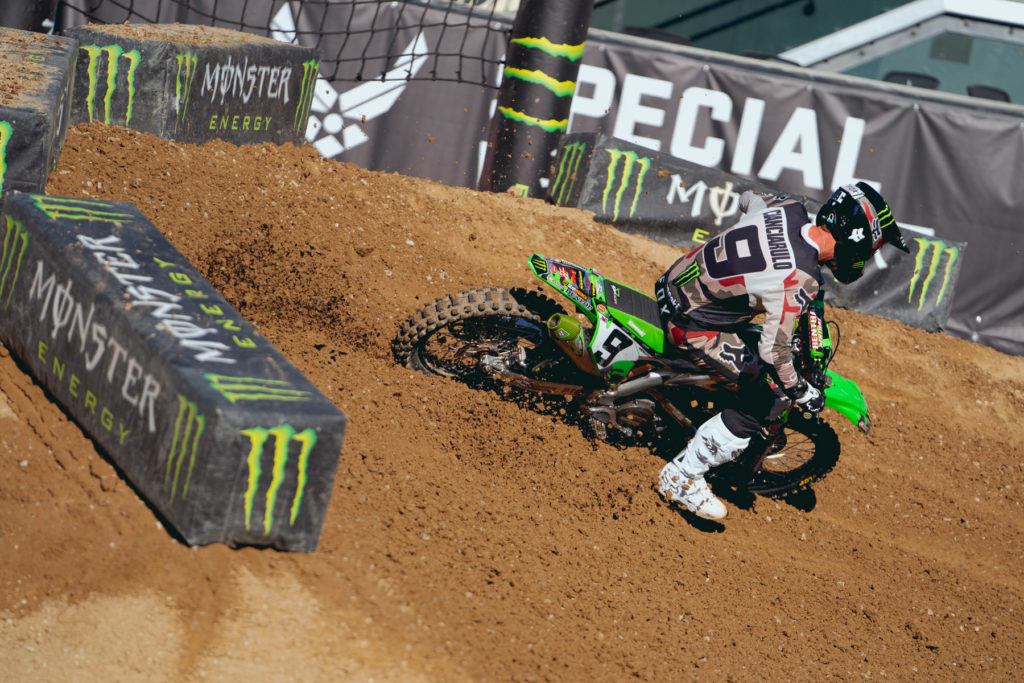 Two potential top-ten finishers in the 450 Class will miss the remainder of the 2022 Monster Energy Supercross Championship due to injuries they sustained/worsened at the 2022 San Diego Supercross. Adam Cianciarulo and Joey Savatgy came into the third round of the season with injuries, AC racing despite a grade three shoulder separation and JS pushing through a recently torn ACL in his right knee, but both managed to post respectable laps during the practice.

Cianciarulo had a handful of issues during the afternoon, with the biggest being a stumble through the whoops that caused him to get off-balance and stab his right leg into the ground while riding out the mistake. AC cut his afternoon short after the incident, but his pace during the day put him seventh overall in the results, and he lined up for 450 Heat Race Two. After a few tepid laps, he pulled off the track, returned to the pit area, and did not line up for the LCQ. Monster Energy Kawasaki told us later that night that Cianciarulo made the decision to withdraw after the close calls earlier in the day, and by Wednesday, confirmed that he would miss the rest of the season due to damage done to his knee.

“The start of this year has been challenging for me mentally and physically as I’ve done my best to overcome a slowly recovering shoulder injury,” said Cianciarulo in the team press release. “I’m proud of what I’ve been able to achieve given the situation but, I’m obviously now faced with a big setback. I’m looking at this as an opportunity to fully rehab my body, so I’m focused on maximizing every day of recovery to get back to doing what I love at my best.”

This is an important time for Cianciarulo, a third-year 450 Class rider that’s shown race-winning speed while dealing with assorted injuries. Although his current contract with Monster Energy Kawasaki is winding down (he signed a multi-year extension in 2020) and he’s missed a considerable number of races, it’s unlikely that the green team would drop him. He’s been a part of the brand for most of his life and the results at Anaheim One and Oakland were what the team expected of him and his current condition.

“As we’ve seen from Adam through previous years, he displayed exceptional promise and heart in his riding this season,” said Kawasaki Racing Senior Manager Dan Fahie in the press release. “His performances at the first couple of races were right on track with our hopes for him and he was progressing nicely into the swing of things. This injury will unfortunately stall that progress until Adam is healed up and ready to return to racing but, we will continue to fully support him through that time and look forward to his return.”

Monster Energy Kawasaki has Broc Tickle on the bench as a fill-in, a perk of his new testing role with the team. Tickle will be a Main Event-caliber rider when he gets the call up, but that might not come for another race or two. 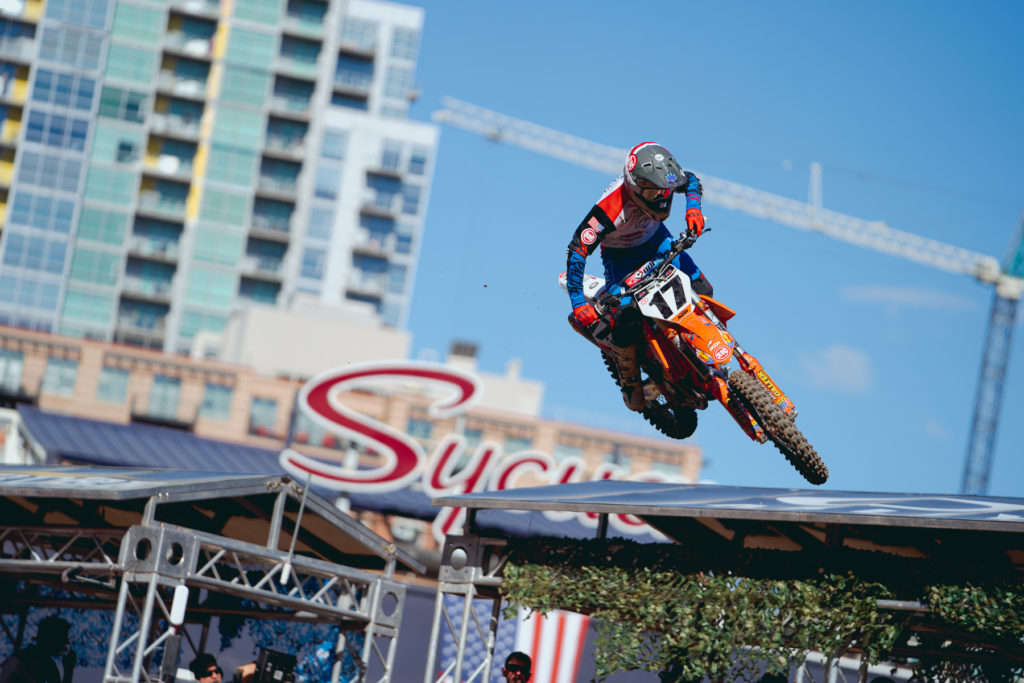 Joey Savatgy’s initial knee injury occurred between Anaheim One and Oakland, but because the Rocky Mountain ATV-MC/WPS/KTM rider got through round two with an eleventh place finish in the 450 Main Event, he planned to race on for as long as possible. The right-hand turns and whoops on the San Diego track took a toll on Savatgy’s strained leg, and he ended the afternoon practice ranked 17th overall.

Unfortunately, Savatgy was caught up in a first-turn incident during 450 Heat Race Two that left him at the bottom of bike and rider pile. He got to his feet after a few slow moments and was taken out of the stadium by the Alpinestars Mobile Medical team. On Sunday morning Savatgy confirmed that he’d need to take the rest of the SX season off due to the injury and on Tuesday he underwent surgery to repair the damage. “I love this job so much and sometimes it’s cruel. Trying to race and not being near 100% isn’t ideal, especially in this class,” he said on Instagram early in the week. “Yesterday was tough, with a track filled with right handers and some tough whoops the knee gave me all it could. But the crash in the heat was the final straw, so I’ve decided to get my knee fixed. Anyone who supports team 17 I appreciate you more than you know, sometimes it feels like you keep getting punched in the face but this will pass. I will keep everyone updated as events happen.” Savatgy’s quick surgery and recuperation gave him a chance to be home with his wife for the birth of their second daughter on Wednesday.

Savatgy has faced his share of setbacks since joining the 450 Class in 2019, but he’s posted top-10 results and shown impressive speed when healthy. This is his second year with Rocky Mountain ATV-MC/WPS/KTM, a three-rider effort that’s now based entirely in Florida and underwent organization changes in the offseason. It’s uncertain if the team will field a replacement for Savatgy, as they already have two bikes on the track with Shane McElrath and Max Anstie. 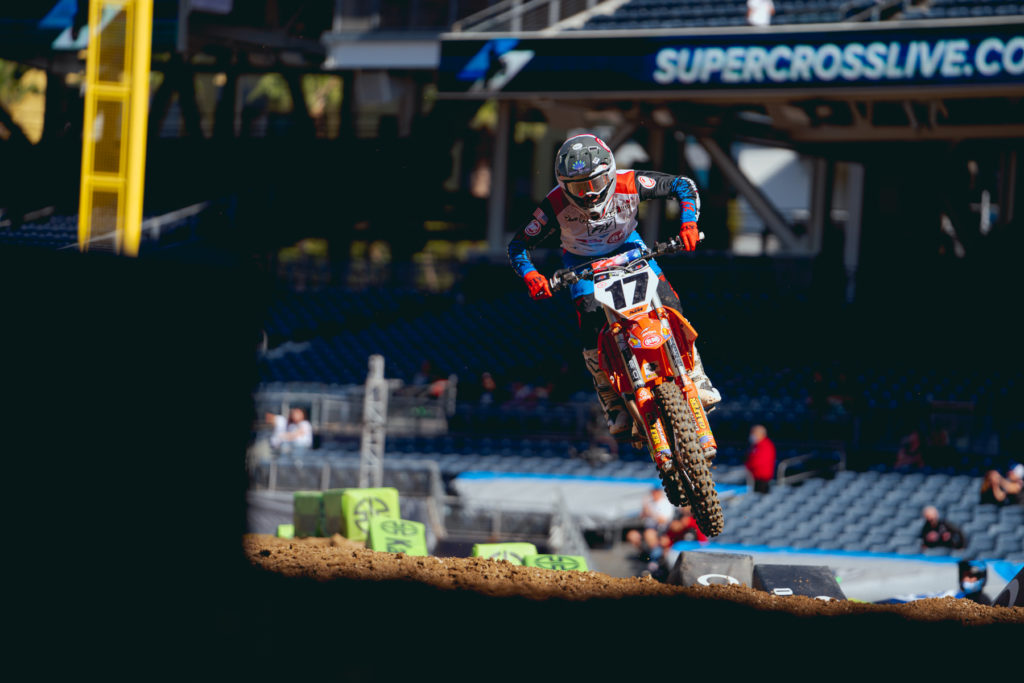