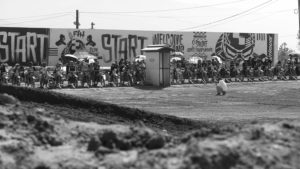 And we’re off! The AMSOIL DBK Terra Firma Triple Crown series is officially underway, as round one went off this past weekend at Glen Helen Raceway. Despite the higher-temps, hundreds of riders filtered through the well-known facilities gates for round one of the unique three-round race series. As the dust settled, hundreds of riders left Glen Helen with smiles on their faces, as they were able to enjoy a day throwing down laps and doing battle.

Though each round of the Terra Firma series will take place at Glen Helen Raceway, one of the unique aspects of the Triple Crown series is that each round will include a new track layout. For round one, racers on the main track were greeted with an exclusive track layout; which included Mt. Saint Helen and a newly built set of rollers before the finish line. Riders expressed their love of the fast, unique layout throughout the day. 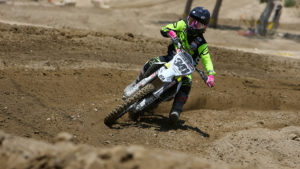 We had to do a double take when we saw “Izzi” on the back of jersey in practice. To our surprise, Nico Izzi is back at the track and back showing off his skills. Though Nico has only logged a few days of riding since his return to the sport, it was easy to see the natural talent the once factory-supported rider holds. Nico lined up aboard a Husqvarna FC450 in both the 450cc Pro and 30+ Pro classes, where he raced his way to two moto wins and two second place finishes behind Sean Lipanovich. 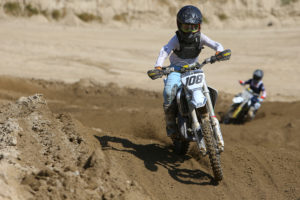 The 85cc classes held some of the most action-packed racing round one of the Terra Firma series saw. Traison Payne was amongst a 15-rider field in the 85 8-12yrs Open class and took the overall victory after consistent finishes in both motos; having won the first moto and placed second in the next. Traison then went on to claim the overall win in the 85 12-12yrs class after snagging another moto win in the second moto.