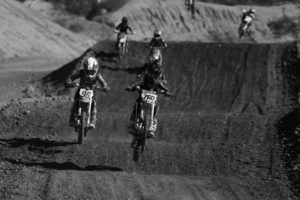 The final AMSOIL Swapmoto race series of 2020 is nearing an end, as round two of the Fall Classic triple crown went off this past weekend at Perris Raceway. Hundreds of racers filtered through the iconic facilities gate eager to line up behind the starting gate. And fortunately for those racers, the track crew at Perris Raceway prepped two tracks to perfection and with perfect weather in the forecast; round two of the Fall Classic triple crown series was set to be another race for the books! 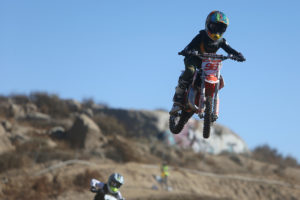 One of the coolest rewards that come from running a local race series is the ability to watch racers develop their skill over time. That being said, youngster Dylan Graham has been a regular at the series for quite some time, so we’ve noticed Dylan’s bike-skill and speed improvement over the last year or so. In recent months, youngster Dylan Graham has funneled through the classes and moved up to the big track aboard his KTM 65 SX. (The Swapmoto race series gives racers the option of racing in a higher skill-level class on the main track or a lesser experienced class on the vet track.) And at round two of the Triple Crown series, Dylan’s speed and consistency in the Open 65cc (No Beginners) class paid off as he rode his way to an overall class victory after snagging the moto one win. Dylan then went on to secure a second-place overall finish in the Novice 65cc class. Way to go, Dylan! 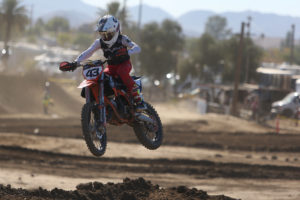 Fresh off of a solid performance at the 2020 Mini Major East, Noah Viney came out to Perris Raceway for round two of the Triple Crown series to do battle aboard his Rides Unlimited KTM 85 SX. We’ve seen Viney work his way around a track many times, but man, did he turn some heads this past weekend. As expected, Noah lined up in the Open 85-150F/Supermini class and laid it down once the gate dropped, leading him to a 1-1 result in the stacked class. However, what really stood out was his performances in both the 125cc Open and School Boy classes. Despite being underpowered, Noah shredded his way through the pack and to four more moto wins aboard his Supermini. And just like that, Noah Viney left Perris Raceway undefeated and with six more race wins to his name.

@ridestacyc GROMCROSS is today @glenhelenraceway ! Check-in starts at noon. Practice starts at 3 PM. Even if you pre-register don’t forget to go by registration to pick up your number plate. It’s going to be awesome! The 215 freeway at the 60 freeway had some major construction going on this weekend so check for alternate routes. ...

@6dhelmets has been dedicated to the relentless pursuit of brain protection and has spent over a decade pioneering safety advancements in helmets. Check out the 2021 Spring collection by visiting your local dealer or www.6dhelmets.com. We are proud to have 6D as a sponsor of the Swapmoto Race Series. #6dhelmets #suspensionforyourhead ...