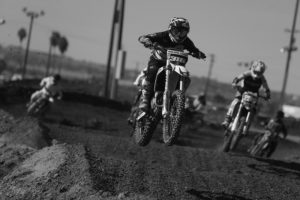 And we’re off! The final AMSOIL Swapmoto race series of 2020 is officially underway, as the Fall Classic triple crown kicked off this past weekend at State Fair MX. To our surprise, each Swapmoto race series throughout this chaotic year has kicked off with a bang and that once again reigned true at round one of the triple crown, as nearly 600 racers joined us for a day of racing. The track crew at State Fair MX prepped two tracks to perfection, and with perfect weather in the forecast, round one of the Fall Classic triple crown was set to be another one for the books. 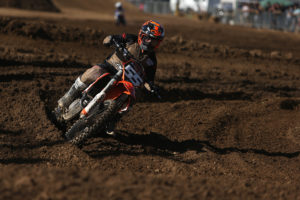 As for the fast guys; the pro classes held a strong turnout, which has seemed to become the usual at the AMSOIL Swapmoto race series. However, the fastest laps of the day were clearly logged by Austin Black on his KTM 250 SX-F. Austin has been putting in the work with Broc Tickle on and off of the bike for a while now, so it came as no surprise to see him at the front of the field all day long. Austin lined up in both the Pro 250F and Pro Open (125-450) classes aboard his orange machine and seemed to snag each of his four-individual moto wins with ease, as he finished nearly 30-seconds ahead of the rest of the class in each race. At the end of the day, Austin took home four impressive moto wins and two overall class victories. 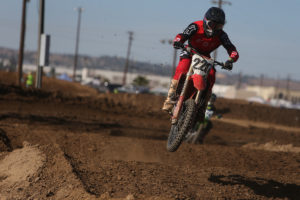 No matter the track, the Novice 450F class is always worth a watch at the Swapmoto race series, as it often holds the largest big-bike race of the day and is littered with action. Over 20 riders lined up to do battle in the Novice 450F class at round one of the triple crown and man, was it exciting. Nathan Cadiz and Cole Kline were the guys to beat in moto one, as they both seemed to have an upper-hand on the rest of the competition. And sure enough, when moto two came around, it was again Nathan and Cole at the front of the field. However, the two swapped positions in moto two, giving Nathan Cadiz the overall win with his win in the second moto. Regardless of the position, the Novice 450F class was arguably one of the most exciting races of the day.

Make sure to give the @perrismotocross a follow for early morning updates. Expecting some light rainfall tomorrow. Pre registration closes in one hour from this post. On site Reg will be set up tomorrow afternoon. #thisismoto.

Round #2 of the El Dorado by @amsoilinc happens this weekend @perrismotocross !!! There is a bit of weather coming through on Sat evening but not enough that would hinder the race according to the forecasters. Sunday looks great. Remember today is the last chance to pre register as signups close at 8pm. We will draw one random winner from the pre Reg list for the @6dhelmets casual wear kit. See you at the race!

Pack Your Bags - Let’s Go Racing! // OGIO Powersports is stoked to be supporting SoCal’s #1 amateur MX series - @swapmotoraceseries. Be sure to stop by the OGIO booth at one of the rounds for some bench racing and to check out the full line of OGIO products. Round 2 of the El Dorado Series by @amsoilinc is Sunday @perrismotocross 🤘

Avoid the sign up line completely and get your own transponder from MyLaps. They are still honoring the Swapmoto Race Series discount code “socal2020” and you can get a 2 yr subscription for only $115.99 +tax and shipping. If everyone had their own and pre registered race day would be even smoother and we could release the race schedule earlier and we could focus on live timing. Doing 921 signups in one day at Glen Helen was a miracle. We were done by 4pm and didn’t cut any laps! After the El Dorado Series transponders will be rented if you don’t have your own. It’s a no brainer for any racer. Check the link in our bio.
@swapmotolive
@amsoilinc
@thormxofficial
@asvinventions
@yamahamotorusa
@throttle_syndicate
@odigrips
@xbrandgoggles
@zingginc
@actionsportscanopies
@ireniccbd
@6dhelmets
@customupfits
@flowvisioncompany
@renegadefuel
#swapmotoraceseries
#eldoradoseries
#cmxrs ...

A helmet is the most important piece of safety equipment you will put on your body. With omni-directional suspension @6dhelmets has industry leading technology to keep you on the track! Their customer service team is top notch and we are proud 6D Helmets has chosen to support the riders of the @swapmotoraceseries Our next race is going to be held @perrismotocross on Jan 24th and a random drawing will take place for those who have pre registered. Don’t forget to pre register at www.Swapmotoraceseries.com Winner will get a swag pack of casual wear from 6D at the race! Make sure to visit www.6DHelmets.com to learn more about their helmets and products for youth and adults!
@swapmotolive
@amsoilinc
@thormxofficial
@asvinventions
@yamahamotorusa
@throttle_syndicate
@odigrips
@xbrandgoggles
@zingginc
@actionsportscanopies
@ireniccbd
@6dhelmets
@customupfits
@flowvisioncompany
@renegadefuel
#swapmotoraceseries
#eldoradoseries
#cmxrs ...

If everyone visits the link in our profile you’ll see an opportunity to purchase your my laps transponder. With this transponder it would allow us to run a smooth program with no line because you would go straight to the gate for Racing. We could even release the schedule prior to race day. It’s a great idea to pick up your own transponder. Thanks for everyone’s patience as we have a record number event.
@swapmotolive
@amsoilinc
@thormxofficial
@asvinventions
@yamahamotorusa
@throttle_syndicate
@odigrips
@xbrandgoggles
@zingginc
@actionsportscanopies
@ireniccbd
@6dhelmets
@customupfits
@flowvisioncompany
@renegadefuel
#swapmotoraceseries
#eldoradoseries
#cmxrs