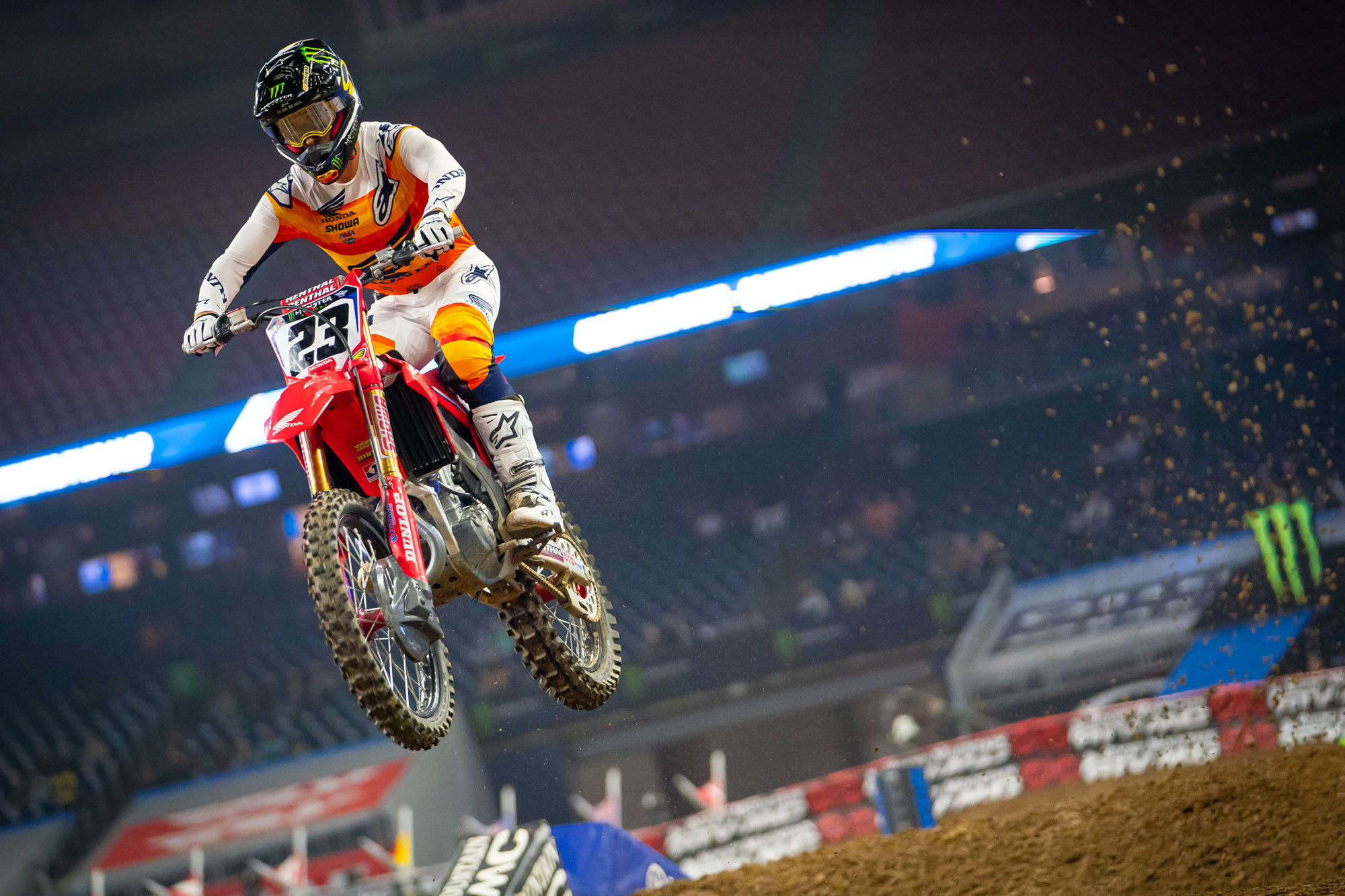 UPDATE JANUARY 21 | Team Honda HRC has announced that Chase Sexton will sit out the 2021 Houston Three Supercross due to ongoing pain in his shoulder from Tuesday night’s crash. The rookie has undergone multiple exams and scans on his shoulder, all of which have come back free of fractures, but the injury has limited his range of motion and is still too fresh to line up. Sexton has returned home to Florida and will use the additional time to recover, with hopes of making it back for the trio of races that will happen in Indianapolis later this month. “I’ve been having problems with my right shoulder being weak and limited range of motion. Getting MRI done tomorrow back in Florida to see if there is any damage done internally,” said Sexton on Instagram. “Hoping to be back next weekend at 100% for Indianapolis. Thank you for the support.”

Chase Sexton’s crash was one of the many big moments in the 450 Main Event at the 2021 Houston Two Supercross. Fortunately and surprisingly, it sounds like everything could be okay for the rookie. The Team Honda HRC rider was kicked out of control as he exited the sand section/approached the first jump in the long rhythm lane, got thrown over the top of the bike, and landed shoulder-first on the next jump.

After a few moments on the ground with the Alpinestars Mobile Medical staff, Sexton got to his feet and walked off the track, but the way he favored his right side sparked concerns of arm or shoulder injuries.

We reached out to Sexton on Wednesday morning, and though sore, he was hopeful things aren’t as bad as initially feared. “I honestly think it’s just bruised badly,” he told us in a text. “It’s definitely not separated. Even though the result last night was not good, that race did a ton for my confidence.”

He shared more details in an Instagram post and stated his outlook for the next few days. “Went from a dream night to a disaster in a split second. I felt so good last night and especially in the main I was locked in and was very comfortable with the track until the crash. Thanks for everyone checking in and seeing how I am but as of right now my right shoulder is pretty banged up. Just waiting for further evaluations but hoping it’s just deep bruising! I’ll keep everyone updated as soon as I know more!”

The crash had an impact on others in the field: Roczen, Anderson, Friese, and Davalos were all docked points for jumping through a section that was under red cross caution flags.