The first day of racing at the MXGP of Flanders has concluded with Monster Energy Yamaha Factory Racing’s Jeremy Seewer and Nestaan Husqvarna Factory Racing’s Kay de Wolf victorious in the deep sandy conditions of Lommel.

The riders were tested to a brand-new layout of the very well-known Lommel circuit, that is a popular stomping ground for much of the paddock. One of the biggest changes is the new first corner, which goes right instead of left and the direction of the track which has already made for some interesting racing this weekend so far. 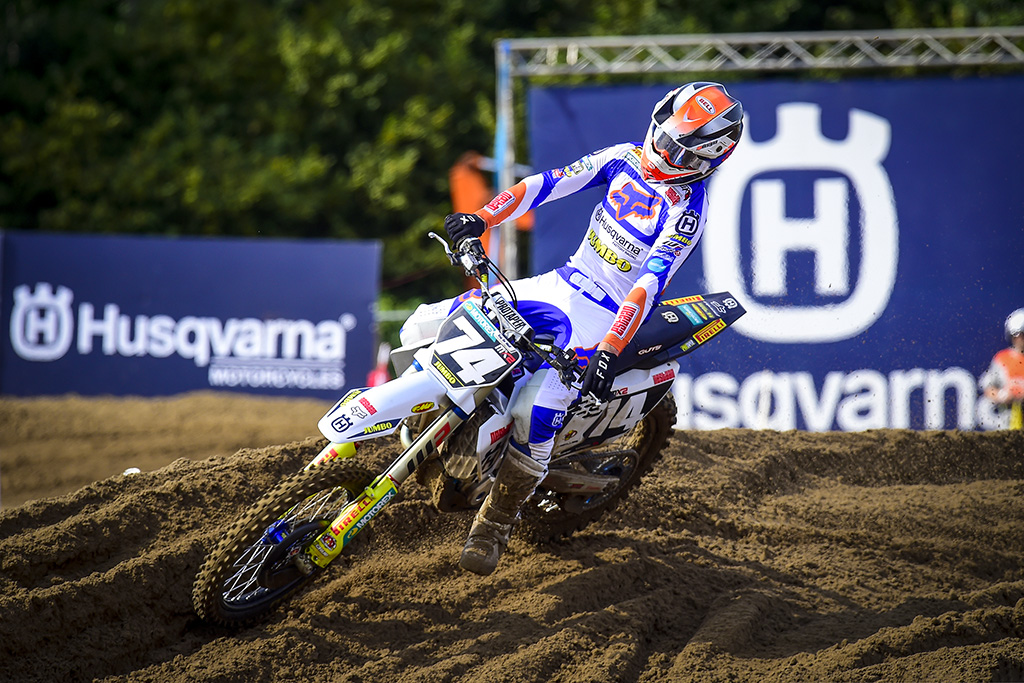 Red Bull KTM Factory Racing’s Tom Vialle, along with F&H Kawasaki Racing Team’s Kevin Horgmo and Liam Everts of DIGA Procross KTM Racing got unlucky in the first corner, as they went down, with Vialle not carrying on with the rest of the heat.

Monster Energy Yamaha Factory Racing’s Jago Geerts was another rider who struggled in the start but made his way up to fifth and then set his focus on Adamo just ahead. Shortly after he was able to get it done and move into fourth.

While de Wolf led the way, Monster Energy Yamaha Factory Racing’s Thibault Benistant was the rider in second position who was looking fast after setting the fastest lap of the race. He was however 4.124 seconds down on the leader.

de Wolf stretched his lead out even further, as Geerts took third from Moosdijk and Everts made a stellar recovery to find his way up to 10th. The Belgian finished the race 8th.

In the final stages of the race, the battle for the win intensified, as de Wolf and Benistant set their personal best laps of the race, while Geerts clocked the fastest lap time of the heat.

In the end, de Wolf was unmatched as he won the heat by 8.784 seconds over Benistant and Geerts. Moosdijk was fourth on his first race back from injury, with Adamo finishing in solid fifth.

Kay de Wolf: “I took the holeshot, didn’t actually expect it and I think three or four riders went down in the start. The holeshot wasn’t easy, because my start wasn’t that good but I cut back and got it and led the whole race, just did my own thing, so that felt really good!”. 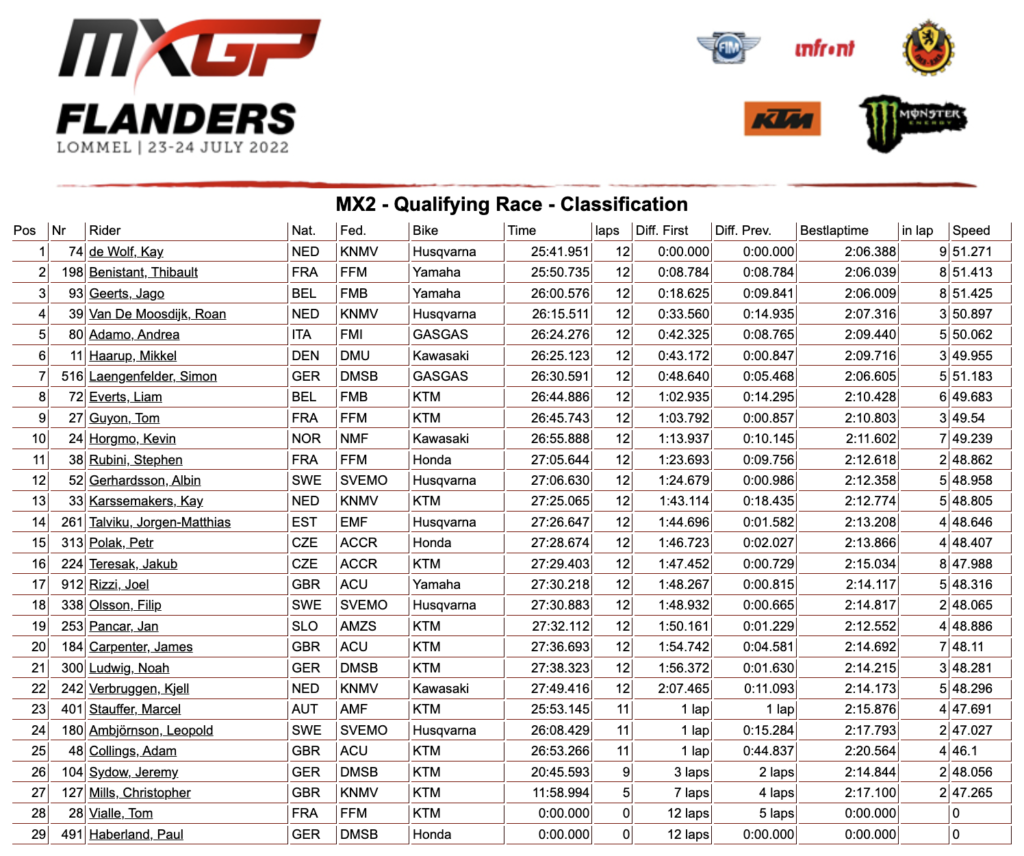 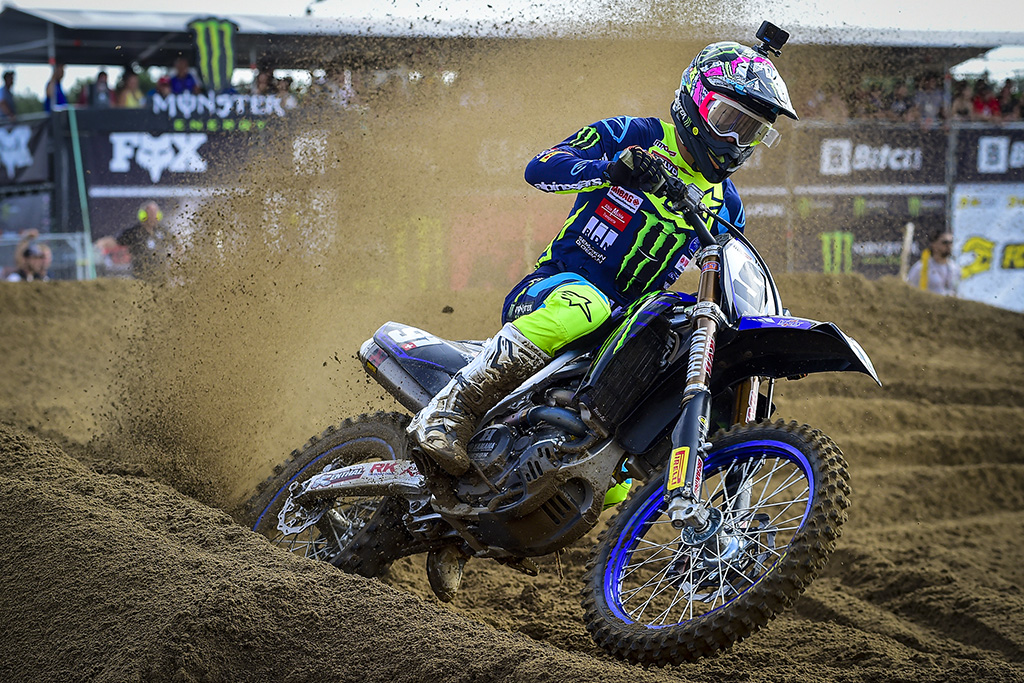 Gajser quickly got by Kullas and Prado to move into second place, with his teammate Mitch Evans doing the same to get himself up to third. Kullas then dropped down to seventh.

Monster Energy Yamaha Factory Racing’s Maxime Renaux started down in around 11th, while Seewer pushed his lead to 2.153 seconds over Gajser, Evans and Prado.

Febvre then flew by Prado as he took over fourth position and began to set his sights on Evans who was having a great race. Though not long after, Evans made a big mistake as he jumped the triple and lost his legs on the take off. The Aussie crashed big and took Febvre down with him who caught his bike.

Prado, Coldenhoff and later Vlaanderen got by Febvre, as Seewer went on to win the qualifying heat for the second weekend on the bounce. Gajser finished second, with Prado third while Vlaanderen passed Coldenhoff for fourth in the final laps.

Beta SDM Corse rider Jeremy Van Horebeek did not line-up for the qualifying race today due to illness, though is planning to do the races tomorrow, depending on his condition, to give his home fans something to cheer about.

Jeremy Seewer: “I really enjoyed the qualifying race and a good start helped. And then I just stayed in my own rhythm, enjoyed the triple, was bouncing around and really felt good on the bike. It’s amazing to go back-to-back with wins on Saturday. The races are tomorrow but at least this gives me a good feeling and confidence and I’m just looking forward to the racing”. 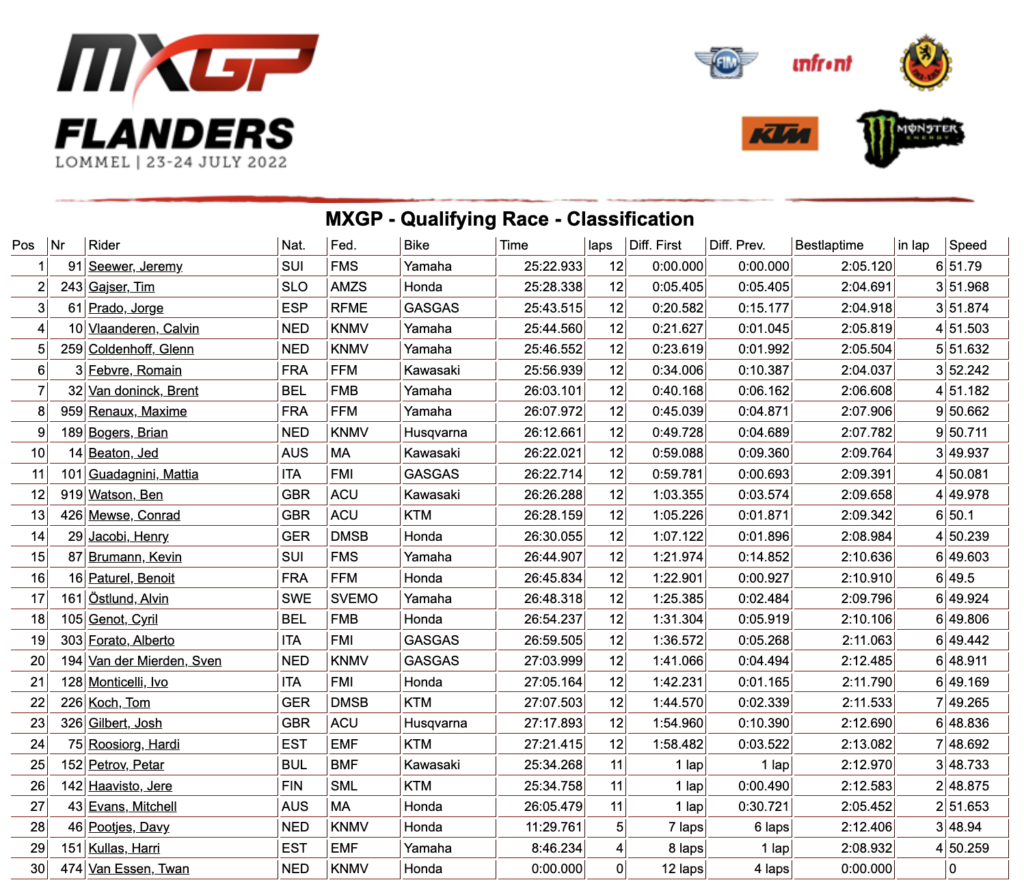