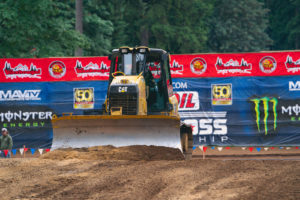 The Lucas Oil Pro Motocross Championship is in the PNW for round eight of the series, the 2022 Washougal Motocross. The day in Washington began with overcast skies and arguably perfect weather conditions, adding to the anticipation for what most riders claim as the most difficult and different track on the circuit. Riders cut in lines during the morning’s practices, when the track was at its best during the early minutes of the first sessions. 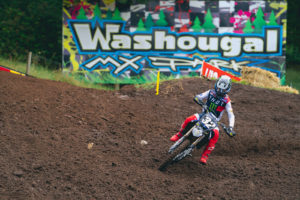 Yet again, Justin Cooper topped the time charts in this morning’s timed-qualifying with a blistering fast 2:11.386 in the first session. The Monster Energy/Star Racing/Yamaha rider also led the field for a few minutes in the final session, but the slower track in the second session allowed his first session time to remain up front.

Jett Lawrence was the next name on the time sheets, as his 2:13.054 in the first session was a few hundredths faster than Hunter’s best time. Though, Jett’s lap time was nearly two-seconds slower than Coopers in the first session, Jett did top the charts in the final session with a last lap heater.

Honda HRC’s Hunter Lawrence ended up in third place overall with his 2:13.400 logged in the first session of timed-qualifying. Hunter sat just a few hundredths off of the next fastest time. 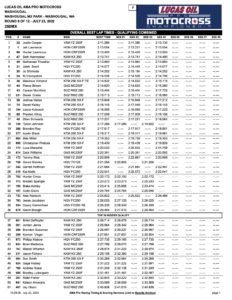 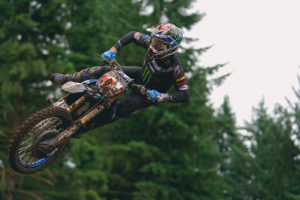 Monster Energy/Star Racing/Yamaha’s Eli Tomac laid down a blistering fast 2:10.926 in the first session of qualifying and topped the charts in the 450MX class. The new points-leader went on to set the fastest lap time in the second and final session, until Jason Anderson’s last lap heater.

Much like the 450MX championship; Chase Sexton was just behind, as the Honda HRC rider logged a 2:11.301 in the first session.

Jason Anderson was one of the few riders to improve on his lap-time in the second and final session of qualifying, as he logged a 2:11.351 on the slower course to secure third place overall. That lap time came after his very last lap and was also the fastest lap time in the second session.

Joey Savatgy was seen in the pits in obvious pain, as he rocked back and forth nursing his right knee. Unfortunately, the Monster Energy Kawasaki fill-in rider did not rejoin the track in the final qualifying session. 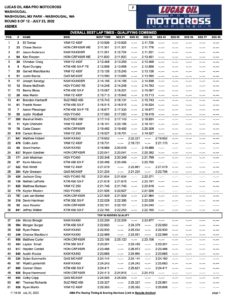 Jo Shimoda on the SML Show