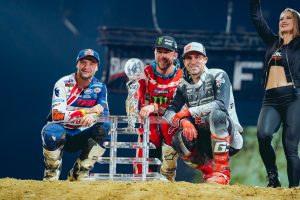 Eli Tomac was off to the early lead after a perfect start from the inside gate. Justin Brayton took second place away from Musquin as they exited the second corner, while Ken Roczen settled into fourth place. Ken then made the pass on Musquin for third place in the whoops, placing Marvin just ahead of Cooper Webb.

Roczen now lurked behind Justin Brayton and searched for a line around his teammate, as Eli Tomac continued to lead. Roczen had closed-in on Brayton but then missed an important rhythm, allowing Justin to break back away. The top-5 would ultimately remain in the same order until Eli Tomac took the race win.

Race two was off and Eli Tomac looked to have another hole shot, but Ken Roczen gave him a slight bump and jammed-up Justin Brayton, who went down in the first turn. Though, this all resulted with Tomac back in the race lead. Ken Roczen trailed Tomac with Cooper Webb just behind.

Ken Roczen immediately challenged Eli for the race lead, as he bolted to the inside line after the whoops and took over the lead. Eli then missed a rhythm a lap later, allowing Ken to break away from him. Meanwhile, Marvin Musquin was pressuring Webb for third place. Cooper Webb upped his pace and was able to stay ahead of his teammate for a majority of the race, but Marvin put in a late-race charge and passed Webb after sneaking inside following the whoops.

However, Marvin Musquin went down at the end of the whoops, just a lap after passing Webb, dropping him back to fourth place. With just two laps to go, Marvin made another mistake and dropped back to 10th place. Ken Roczen took the checkered flag first and snagged the second race victory.

The final SX1 race of the night was off and Eli Tomac was off to another hole shot and the early lead. Marvin Musquin shuffled into second place after the first corner, followed by his teammate Cooper Webb. Meanwhile, Ken Roczen sat in sixth place early in lap one, but passed up to fourth in just a few sections.

Roczen then blitzed past Webb and took over third place, to then set his sights on Marvin. Laps later, Justin Brayton was then challenging Webb for fourth place, just as Roczen was closing-in on Musquin. Justin Brayton ultimately made the pass on Webb. After trailing for a few laps, Ken finally made the pass on Marvin for second place after cutting down on the KTM rider and powering out of the right-hand bowl.

After passing Marvin, Ken reeled Tomac-in and cut Eli’s lead down to just over a second. On the final lap, Ken blitzed through the whoops one last time and got right on Tomac’c rear wheel, but was unable to make the pass for the lead. Eli snagged the final race win of the night.

Chris Blose made a key pass in the second corner to take the race lead ahead of Yannis Irsuti and Jace Owen. Thomas Do looked to have a pass made on Owen, but Jace cut back down and in front of Do. Meanwhile, Cullin Park passed into fifth place.

Chris Blose raced his way to a comfortable lead over Irsuti and the rest of the field. Late in the race, Matt Moss picked up two positions and advanced up to sixth place after some tight racing. Chris Blose crossed the checkered flag and collected the first SX2 race win.

Irsuti snagged another hole shot but Chris Blose again passed into the race lead within the first few corners. Jace Owen shuffled into third place and sat just behind Irsuti.

Late in the race, Jace Owen was challenging Irsuti when he jumped off-line and off of the track, handing second place over to Owen. Chris Blose crossed the checkered flag to collect another race win.

As racers left the gate for night one’s final, Irsuti was off to another race lead, just ahead of Chris Blose. Chris took Irsuti wide to take over the race lead on the second lap, just after Jace Owen made the pass for third place.

Jace Owen then made the pass on Irsuti on the third lap, just a few sections before Cullin Park passed Irsuti. Matt Moss then passed into fourth place. The top-5 remained in the same order to the checkered flag and Chris Blose collected another race win.

Ken Roczen was off to the early lead after rocketing out of the inside gate. Marvin Musquin was in second place, followed by Cooper Webb and then Eli Tomac. Marvin lost front-end traction going up the wall and was forced to roll it, allowing Webb and Tomac to close-in. Eli Tomac made the pass on Cooper for third place and set his sights on Musquin.

As Tomac began to challenge Musquin, Ken Roczen continued to lead with over a 3-second cushion. Cooper Webb lurked behind Tomac and Musquin’s battle for second place. Ken Roczen took the win over Musquin in the first race of the night.

As the second SX1 race left the gate, Eli Tomac looked to have the better jump but Roczen managed to cut inside of the Yamaha. However, Eli secured the race lead in the second corner. Ken pulled alongside Eli after the whoops and the two nearly collided mid-air, just before Roczen took Eli wide in the following corner to take the race lead.

Cooper Webb sat in third place, just a few bike-lengths ahead of Musquin. Justin Brayton entered the picture, as he closed-in on Marvin. A few laps later, Brayton blitzed past Musquin in the whoops and took over fourth place. Back up front, Eli Tomac had reeled Ken Roczen in ever so slightly. With just a few laps to go, Brayton and Webb swapped lines a few times but Justin ultimately secured third place position. Ken Roczen crossed the checkered flag and collected another race win.

Eli Tomac was off to the early jump in the final SX1 race, but Ken Roczen rounded the first turn inside of Eli and secured the lead. Eli then made a mistake in the second rhythm lane, allowing Roczen to gain a little cushion. Cooper Webb sat in third place, just a few tenths ahead of Brayton.

Cooper Webb made a massive mistake with 7-minutes on the clock, as he jumped left and off-track through the rhythm lane, dropping him back to fifth place. Ken Roczen continued to lead Eli Tomac, but Eli cut Kenny’s lead down lap after lap. With three-minutes on the clock, Eli had cut Ken’s lead down to under a second. Despite trimming down the gap, Eli was unable to get close enough to make a pass. Ken Roczen took the final race win and was crowned the King of Paris in 2022.

The first SX2 race of night two was off and Matt Moss was off to the early lead after Jace Owen and Chris Blose collided in the first turn. As two of the favorites worked their ways through the field, Matt Moss continued to lead Cullin Park. After four laps, Chris Blose made the pass on Justin Starling through the whoops to take over tenth place.

Chris Blose continued to charge through the pack and ultimately made his way into fifth place, while Matt Moss secured the race win ahead of Cullin Park.

The second SX2 race was off and Matt Moss was on his way to another great result after grabbing the hole shot and the early lead. Chris Blose sat in sixth place at the end of the first lap. While, Jace Owen made the pass on Cullin Park for third place. Jace Owen then made the pass for second place.

Chris Blose began to pressure Cullin Park, but Park wasn’t rolling over. Matt Moss cruised to another race win, this time ahead of Jace Owen.

Matt Moss rounded the first turn with the race lead, but nearly threw it away just moments after. Jace Owen then took Moss wide and took over the race lead just a few corners later. Chris Blose trailed in third place and looked for a line past Moss. With five-minutes on the clock, Chris Blose went down in the whoops and was slow to get up.

Matt Moss was then on Jace Owen’s rear wheel and pressuring for the race lead. With Blose out of the race, the Prince of Paris title was between Moss and Owen, adding to their on-track battle. Matt Moss blitzed past Owen through the whoops and took over the race lead.

Matt Moss took the checkered flag first to grab another race win and the SX2 Prince of Paris title.

2022 Paris Supercross | How Was Your Sunday
Michael Antonovich November 14, 2022

2022 Paris Supercross | How Was Your Sunday