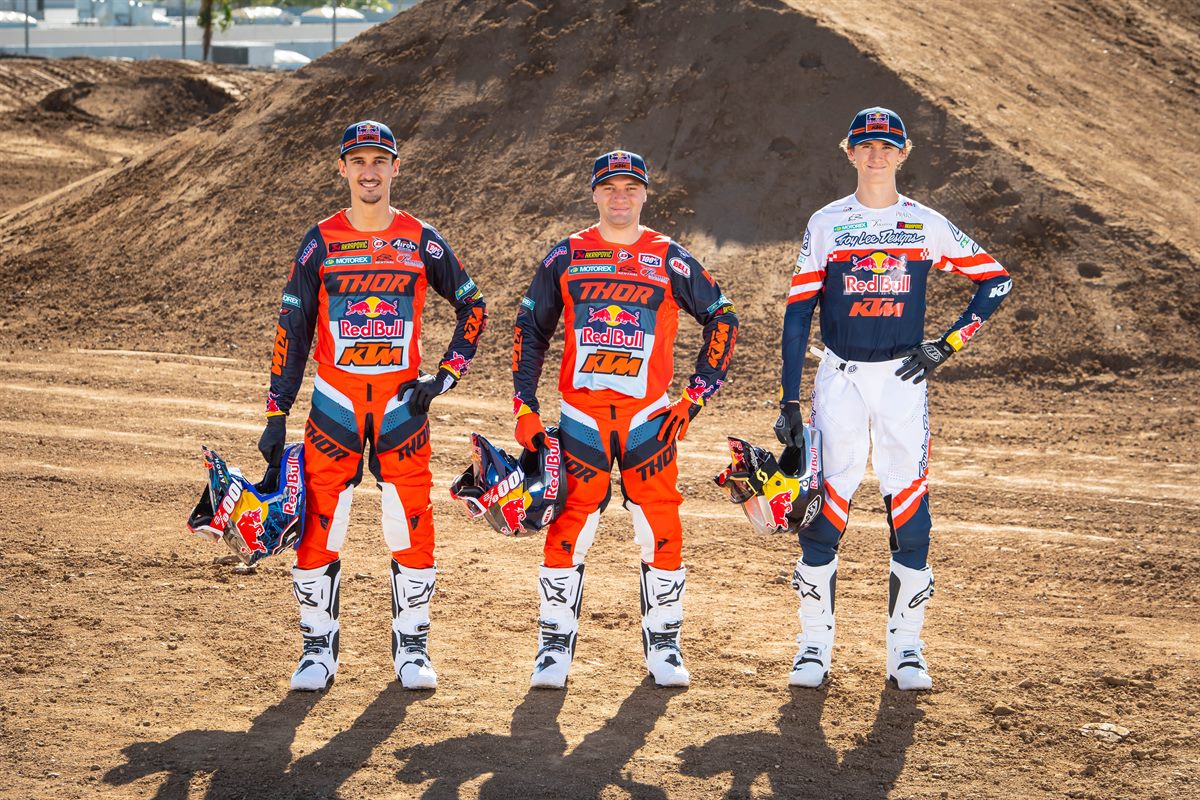 Red Bull KTM has announced their plans for 2021 will be a three-rider lineup that is set to feature Cooper Webb and Marvin Musquin returning to the positions in the 450 Class while incoming rookie Maximus Vohland will be the core of the brand’s 250 Class effort. This plan has been known for quite some time, thanks to the multi-year contracts and longstanding relationships that Musquin and Webb have with Red Bull KTM, as well as an executive decision by the KTM group that brought the small-bore team back in-house. All of these details are similar to the program that KTM has in place in Europe, including lucrative long-term deals with their marquee riders and direct development of young talent for the future of the brand.

The team’s returning 450 Class riders both have a solid, established relationship with KTM. Marvin Musquin has been part of KTM’s racing efforts since 2009, while Cooper Webb joined the brand in 2019. Webb’s time with the team has been successful and thanks to a newly signed extension, he will be on an orange bike through 2022.

Max Vohland, a longtime KTM Orange Brigade amateur rider, was fast-tracked to the factory spot after his results at the 2020 Loretta Lynn’s Amateur Motocross Championship (six moto wins, the 125cc B/C and Schoolboy 1 championships) and has spent the last few months working with the team in Southern California. Vohland will make his professional debut in the Monster Energy Supercross Series, and considering the timing and intensity of his current program training, will likely be part of the East Coast region that starts on January 16. Vohland has a multi-year contract, an important detail for a pro rider early in their career.

There are many details that helped bring the 250 Class effort back under the Red Bull KTM awning, including the shift to GASGAS that the Troy Lee Designs race team recently underwent, but it’s similar to what KTM has with their MX2 program in Europe. With Jeffrey Herlings, Pauls Jonass, Jorge Prado, and Tom Vialle, KTM has claimed every MX2 championship since 2016 and has an ongoing investment with Vialle and Rene Hofer.

The last time that Red Bull KTM was responsible for the 250 Class team in the US was with Marvin Musquin and Justin Hill in 2015.

The complete press release from Red Bull KTM, including quotes from Team Manager Ian Harrison, is posted in full below. 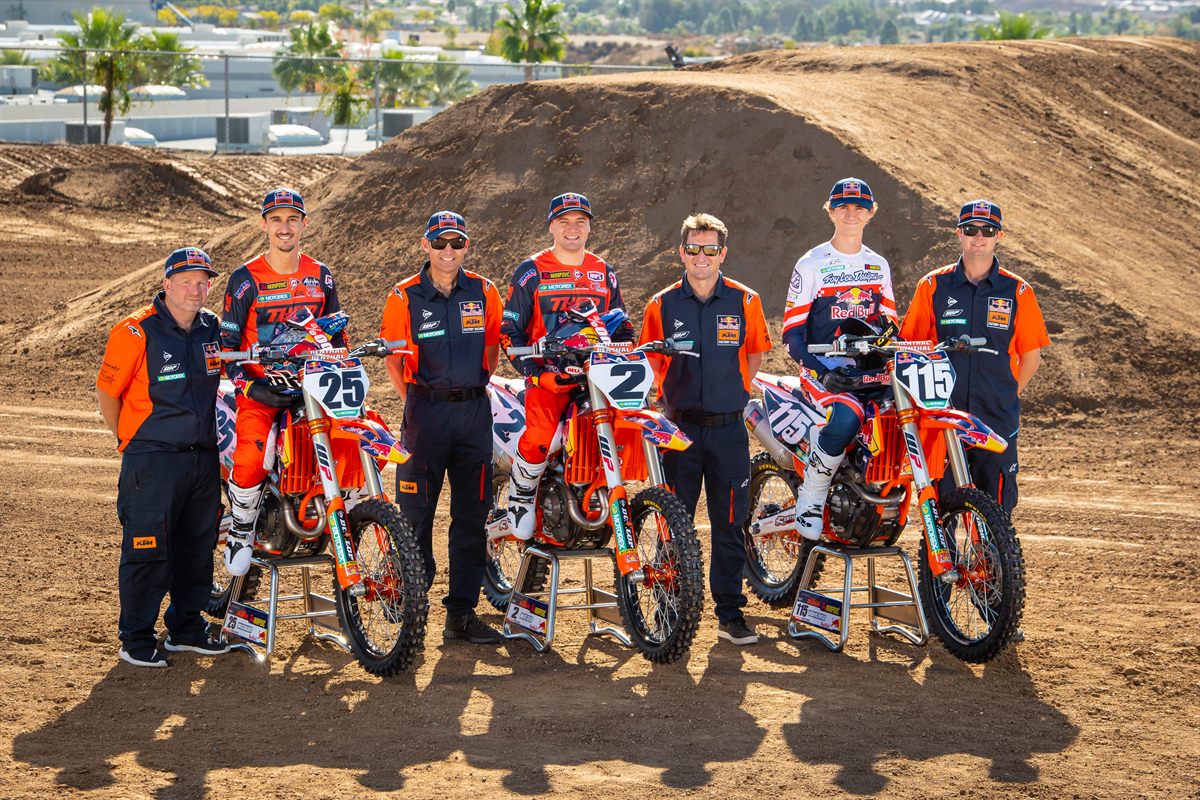 With “offseason” preparations underway for the 2021 race season, the Red Bull KTM Factory Racing Team has announced its three-rider lineup alongside a press event held today at the company’s North American test track facility “RD Field” in Southern California. Featuring two of the sport’s top contenders – Marvin Musquin and Cooper Webb – in the 450 cc division, the team is also proud to welcome rising star Maximus Vohland to its in-house 250 cc effort as the orange bleeder is set to make his professional debut in 2021.

450SX/MX
Marvin Musquin, a decade-long veteran of the Red Bull KTM Factory Racing Team, will return to the 450 cc lineup in 2021 as he dives into the upcoming AMA Supercross Championship with vengeance after missing last year’s series due to a major knee injury. Missing nearly one-year of racing in total, the French rider returned to the dirt for the 2020 AMA Pro Motocross Championship, where he eased his way back into action with a series of promising performances to claim fourth overall in the series. Musquin will continue to put in the work during the offseason to come back even stronger and ready to contest the 450SX title aboard the KTM 450 SX-FACTORY EDITION come January.

Webb, the 2019 450SX Champion, followed up his ground-breaking year with a strong title defense last season as he brought the 2020 championship down to the final race, ultimately finishing runner-up with four race-wins and nine podiums. An ongoing back injury kept him sidelined for this past AMA Pro Motocross Championship but the North Carolina native has been hard at work and is ready to do battle in 2021. On the heels of inking another two-year deal with the Red Bull KTM Factory Racing Team, Webb will look to return the number one plate to his KTM 450 SX-F FACTORY EDITION for the next two seasons.

Ian Harrison, Team Manager: “We are very confident in Marvin and Cooper for the 2021 season. Marvin has been with KTM North America for a decade now and has always competed at the highest level. Having missed the 2020 season, he is eager to get back to racing SX and being healthy is a big part of the puzzle. We plan to start testing this week to fine tune our 2021 machine – we have a few new components to test and work with that should help Marvin improve his bike setup. We are looking forward to what Marvin can do in 2021, him being with long-time mechanic Frank Latham puts him in good hands.

Cooper has a lot of experience coming into 2021 and we are very excited to see how things progress now that he has been with us for two years. Along with his mechanic, Carlos Rivera, I feel we are all at a point where we understand each other’s strengths and that leads to better bike setup and race day changes. Cooper also has a clean bill of health, so we are confident that he will be ready to keep the momentum rolling into 2021.”

250SX/MX
For the first time since 2015, the Red Bull KTM Factory Racing Team will bring its 250 cc effort back in-house with a one-rider lineup in 2021. Maximus Vohland, a Northern California native with strong motocross heritage in his blood, comes in with many years under the guidance of KTM’s Orange Brigade Amateur Motocross program. The five-time Loretta Lynn’s AMA National Champion, and most recently crowned 2019 AMA Youth Rider of the Year, has proven his merit at the highest level of amateur racing where he now begins the next chapter with his professional supercross debut aboard the KTM 250 SX-F.

Harrison adds, “Max has had a long and successful journey as an amateur with KTM and we are happy to be involved in the start of his young career. I met him years ago and have seen his progress through the amateur ranks – he is young but has a lot of potential. Time will tell how he manages the ups and downs of professional racing and we will be here to help support him in every way we can. Our goal is to have Max and KTM up front.”

The 2021 AMA Supercross Championship is set to kick off on Saturday, January 16 at NRG Stadium in Houston, Texas. 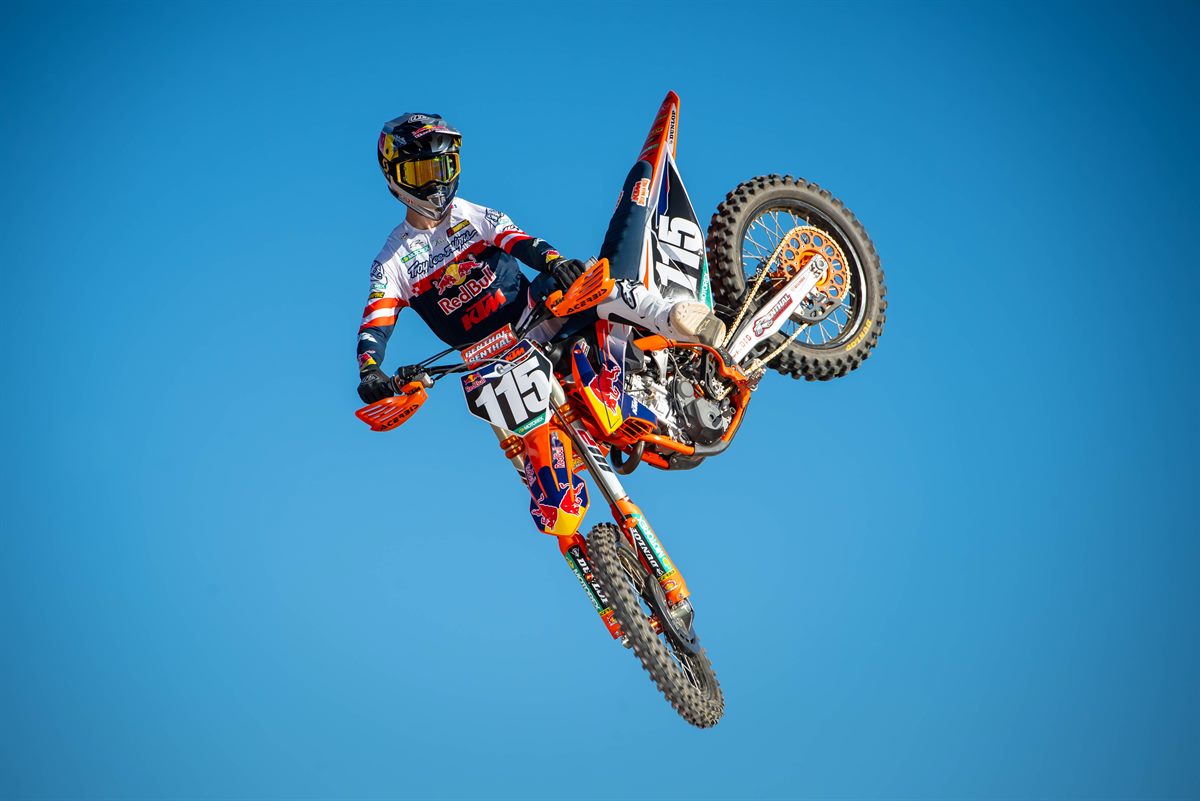 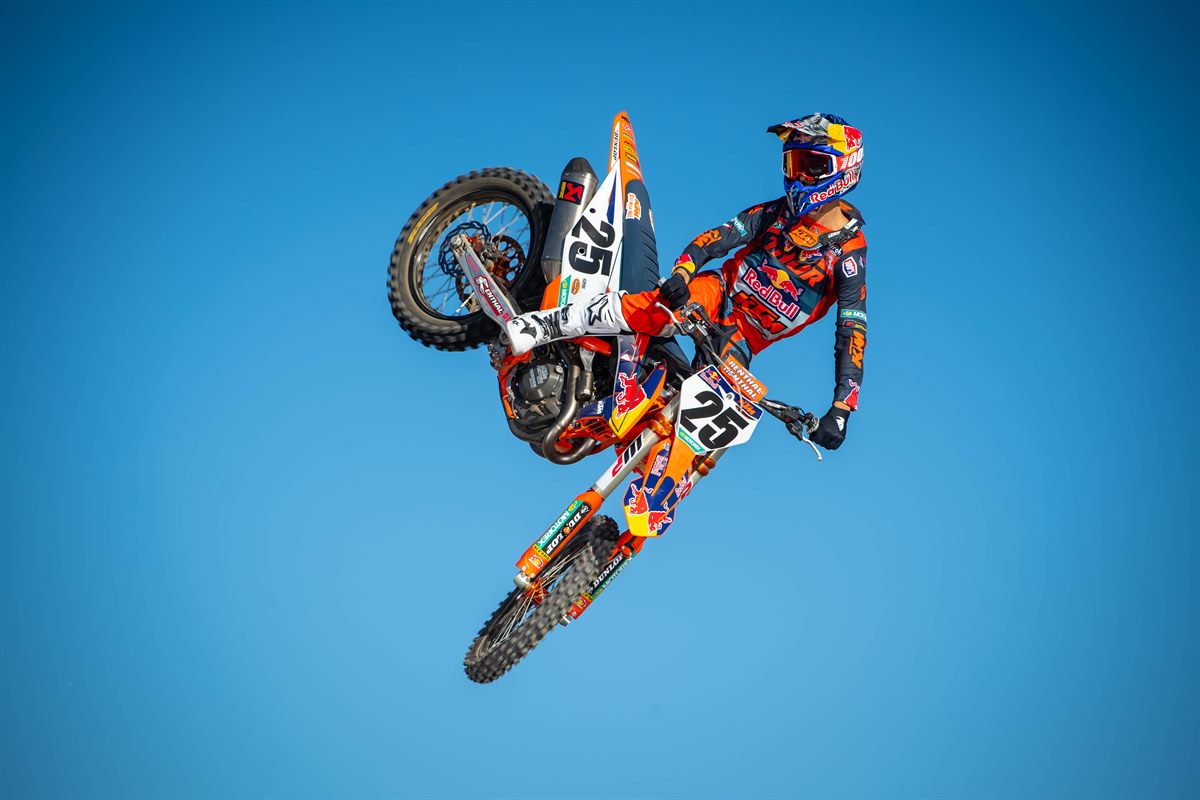 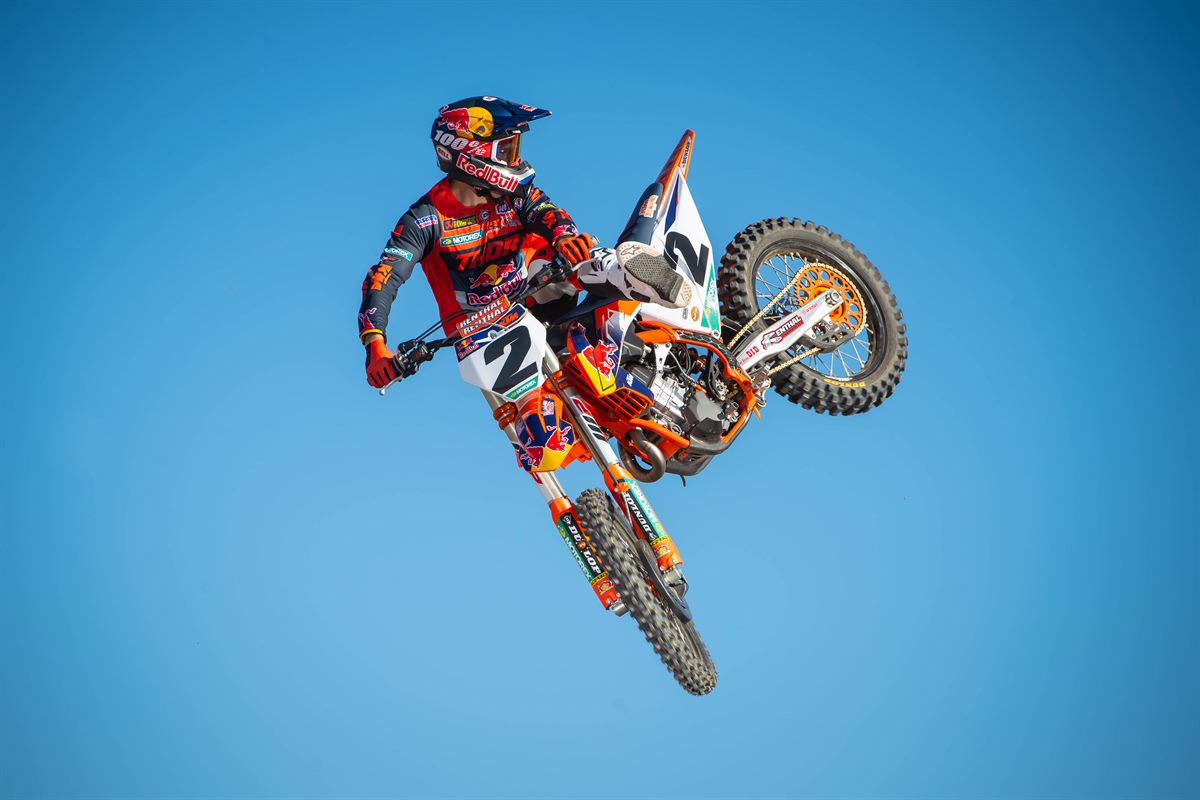 On The Mic ft. Cooper Webb