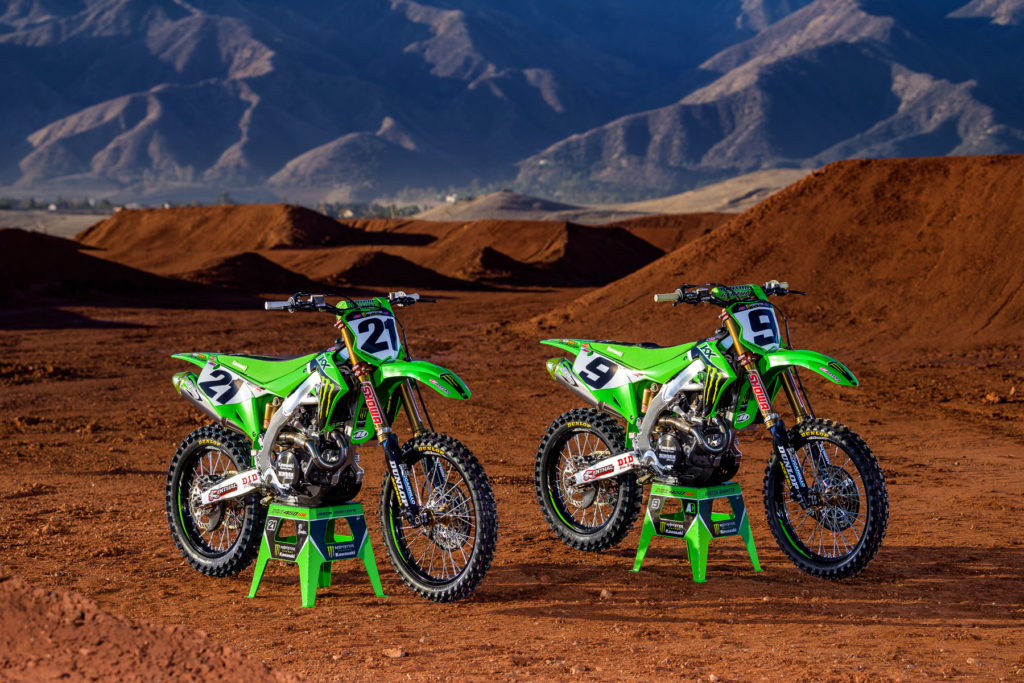 Monster Energy Kawasaki will again field a two-rider effort, this time with Adam Cianciarulo and Jason Anderson at the helm of the KX450SR bikes (the SR stands for “Special Racer,” Kawasaki’s designation for factory equipment). Team Green has spent the past few seasons refining the KX platform with their technical partners, and there are plenty of things to note about the race bikes for 2022.

– Although Kawasaki has worked with Showa and Kayaba simultaneously in the past (Eli Tomac and Ryan Villopoto opted for KYB goods during their terms with the team), Showa suspension will now be the standard for Cianciarulo and Anderson in 2022.

– 2022 will be Cianciarulo’s third year on the KX450, but it looks like he’s still searching for the perfect front-end feeling. AC has now swapped to Renthal’s Twinall handlebar, a crossbar-equipped unit that can deliver more precise yet rigid feedback to the rider’s arms.

– Anderson chose the tapered-style Fatbar in his transition to the KX450.

– A small hump added to the seat foam will keep Cianciarulo centered in the cockpit, while the flat profile of Anderson’s seat will let him slide to the back of the bike.

– Spot the small tabs on the shock linkage; this is where data acquisition sensors that chart the movement of the suspension are mounted.

– Mechanic Jason Montoya has earned a work bay in the Foothill Ranch facility and will look after Jason Anderson’s race bike.

– Broc Tickle played a valuable role in testing and development during the off-season.