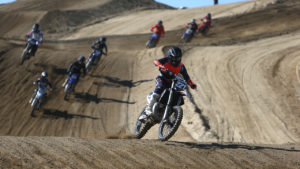 And we’re off! The AMSOIL West Coast Open Race Series is officially underway, as we rolled into LACR for round one of the annual series. Well over 700 eager racers rolled into the sand-filled facility for a wild day of racing under the sun. The track crew at LACR prepped two tracks to perfection and paved the road for an exciting opening round of the West Coast Open series. 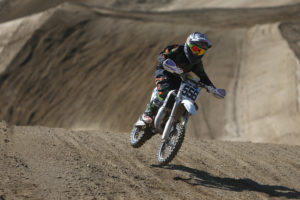 As for the youngsters, the 65cc classes held some of the closest battles that round one of the West Coast Open saw. Two of those gritty battles took place in the Open 65cc (No Beginners) and Novice 65cc classes, and both involved Matthew Naranjo. However, Matthew managed to come out on top in all four of his motos as he put together a picture perfect performance aboard his Husqvarna TC65. Matthew left LACR with four more moto wins to his name and the points lead in both the Open 65cc and Novice 65cc classes. 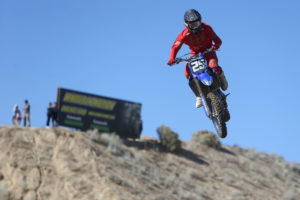 We’re sure you’ve all heard it by now but we can’t help but mention it again, consistency is key. The Novice classes always hold a stacked field at the AMSOIL Swapmoto race series and that reigned true again at LACR. The Novice 250F class brought 18 riders to the gate, making it one of the largest gate drops on the main track at the series opener. That being said, both motos of the class were bound to see some good racing. The checkered flag was first welcomed by Chase Gunderson in moto one, and his brother, Chandler, would follow in second. However, Dane Morales joined the battle in the second moto, as he crossed the checkers in second place, just ahead of Chase. And at the end of the day it was Chandler Gunderson who took the overall Novice 250F class victory, thanks to his consistent top-2 finishes in both motos.

Thanks so much to the crew @customupfits they absolutely crushed this build for @mxproparts !
Can’t wait to see Brandy back at the races. ...

2 years and counting with no sign of slowing down! Congrats to everyone on the media side for all the hard work. It was a wild time when we decided to pick up where Transworld left off. No looking back! Thank you to everyone for the support. ...

Registration is open!!! Round 1 of the West Coast Open Series by @amsoilinc kicks off today @lacrmx. Practice starts at 8am and racing will follow on both Main and Vet tracks. ...

Awesome day of GROMCROSS by @ridestacyc at the @swapmotoraceseries Smiles for miles! Thanks to everyone who came out! What an awesome turnout! ...

Have you been signing up for the @thormxofficial Racer Cash Program? It puts real money in your pocket for use at local dealers when buying Thor product! Every email confirmation for pre entry and ads on Swapmotoraceseries.com have the link! Get signed up and get some Thor Racer Cash! All classes are eligible. ...

We will send out an email tonight to all pre-registered racers. Make sure you get to the track early enough to check in and get your number plate. Also practice will start at 3 PM sharp and Racing will follow at about 4 PM. It’s the second @ridestacyc GROMCROSS @lacrmx tomorrow. LACR Has strict rules about wearing a wristband and closing time for the gate. Everybody through the gate for the Stacyc race will pay $10 to the track and will be required to exit the facility immediately after the event. Those who are staying for the Swapmoto Race Series by @amsoilinc make sure you have your wristbands on and can show you paid for camping. Thank you very much. ...

The guys @stan_benson_racing are going to set up to help with all your bike needs @lacrmx this weekend! Lubricants, @flowvisioncompany goggles and tear offs, tires, fuel, re-jetting, chains, sprockets, bars, etc and a mechanic! Make sure and see them for all your needs. 👍 ...

Looking forward to the @swapmotoraceseries by @amsoilinc this weekend @lacrmx !!! Practice on Saturday and all classes race on Sunday. They have opened the gates on Friday for overnight parking from 5-8pm. @ridestacyc GROMCROSS is Saturday as well! Pre registration for STACYC AND WEST COAST OPEN close tonight so hurry over to swapmotoraceseries.com and save time and money by registering online. 🤘 ...