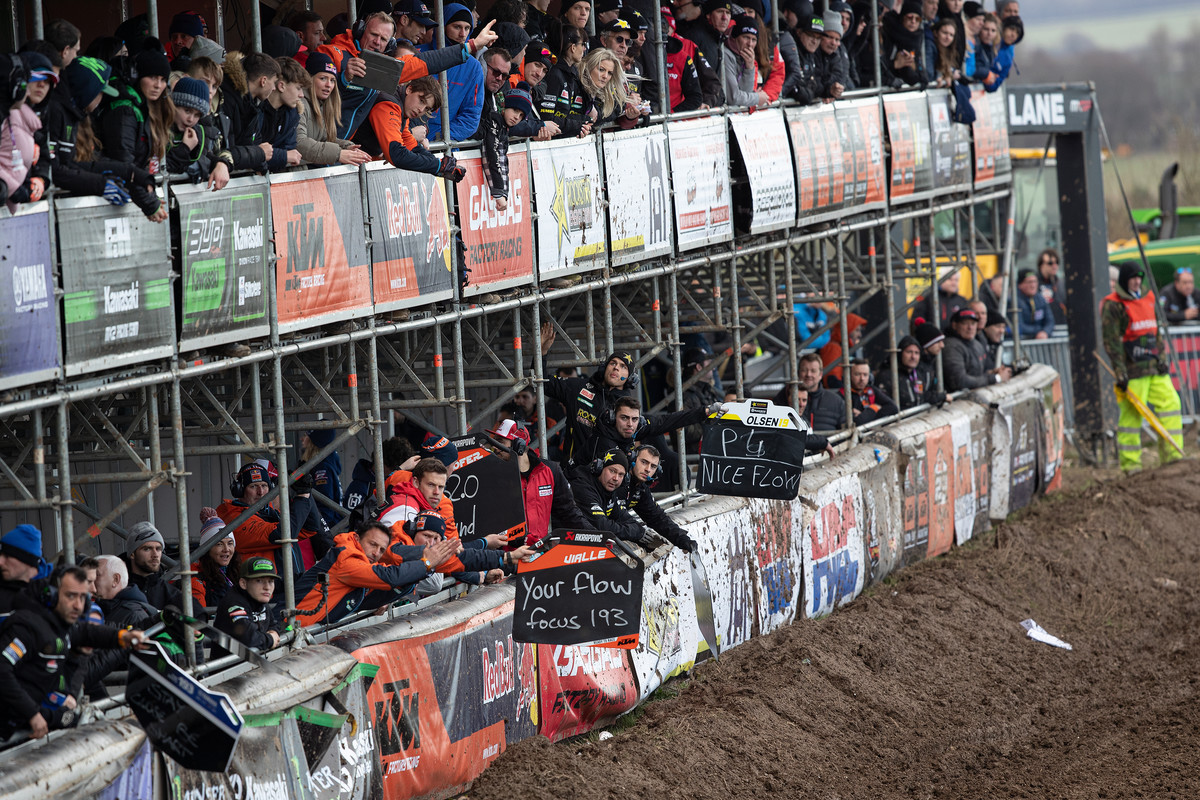 InFront Moto Racing wasted no time when it came to getting details in order for the 2021 Monster Energy FIM Motocross World Championship and on Wednesday, the series promoter announced the provisional calendar for the next season. MXGP is known for putting out grandiose schedules early each year, which almost always have TBD-TBA details, and that continued with the newly released list of races.

The initial plan for 2021 calls for 20 Grand Prix, which starts with a first-time visit to a new facility in Oman (a country on the southeast coast of the Arabian Peninsula) and continues at a TBA venue in Italy, a new track in the Netherlands, an additional round in Russia, the debut of a first-class racing facility in Finland, four races in Asia (two in Indonesia/one in Turkey/one in China), and a finale in Argentina.

That InFront Moto Racing would put out a schedule this ambitious says a lot about the future of MXGP amid the ongoing pandemic and because of the current global situation and the nature of the MXGP series, the “provisional” part of the calendar cannot be emphasized enough.

Yes, we’re all tired of talking about it but the situation continues around the world, and countries around Europe are reenacting restrictions that were issued earlier in the year. Those issues were apparent at the final three rounds of the 2020 season, which were run without crowds at the Arco di Trento circuit in Italy. That the plan is to take the series around the world, literally, in 2021 shows that they intend to get back to normal as soon as possible.

Because the 2020 season ran so late into the year, InFront Moto Racing has decided to push the start of 2021 to April. This will allow everyone the appropriate time in the offseason to rest, recover, and prepare, which is much needed after the run of events that were necessary to complete this year’s championship. However, this schedule extends all the way into the first part of November and could be a sign of things to come for the series.

The ability to get teams and necessary infrastructure to different parts of the world in a timely matter will be key, and it looks like they plan to have sizeable breaks between rounds with major travel (round one in Oman and round two in Italy/round nine in Indonesia and round ten in Czech Republic/round seventeen in China and round eighteen in France).

Anyone that follows the MXGP series knows that it’s common for multiple “To Be Announced” details and plans for visits to different facilities to be included in the early calendars, which are worked out with running changes as the season continues. The 2021 calendar has a “TBA” noted for round two’s venue in Italy, the venue for round seventeen in China, and for the country and venue for the penultimate round. 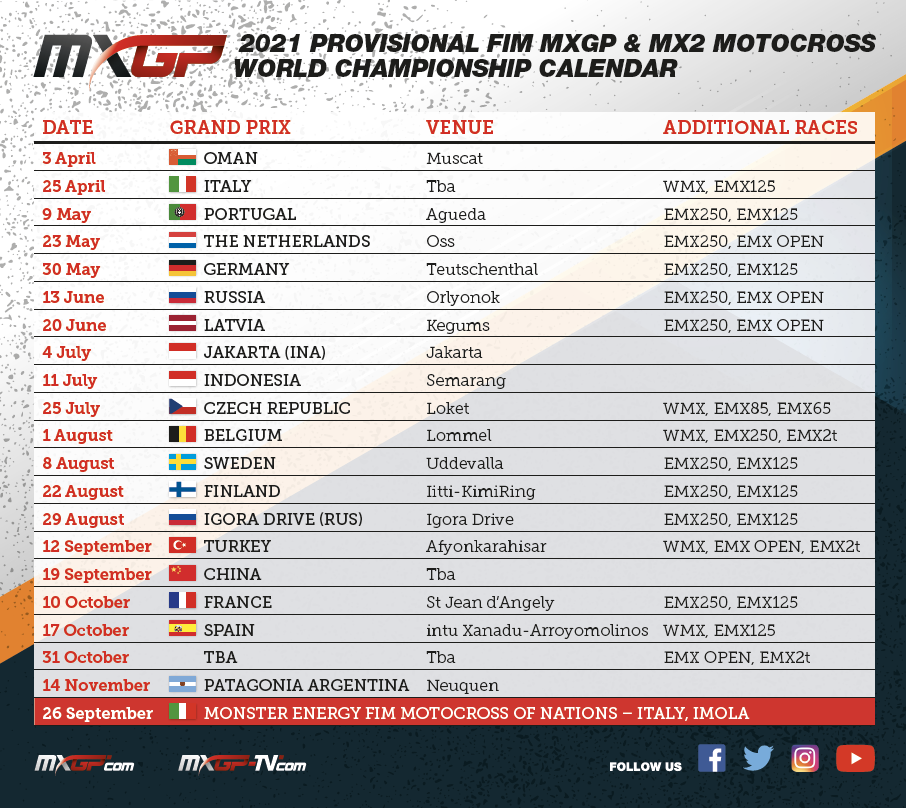 The 2021 season will begin later than usual; the plan is now to kick things off at the beginning of April, in order to give time for the pandemic to ease and for the teams and riders to carry out the testing and preparations that are needed for another intense season of racing. The aim is to keep the calendar with the usual format, though this will be adapted, if needed, to the evolution of the COVID-19 pandemic.

The 2021 racing calendar will feature 20 GP races and will introduce four brand-new venues, for the MXGP of Oman at the Muscat circuit, along with the MXGP of the Netherlands in Oss, the MXGP of Finland in Itti-KymiRing, already presented to feature in the 2020 calendar but then postponed to 2021, and the MXGP of Igora Drive in Russia.

Additionally, the FIM Motocross World Championship will also be returning to some of the favourite venues, including Agueda, Teutschenthal, Orlyonok, Kegums, Jakarta, Semarang, Loket, Lommel, Uddevalla, Afyonkarahisar, St Jean d’Angely, into Xanadu-Arroyomolinos and Neuquen in Patagonia-Argentina.

The season will begin on the 3rd of April 2021 with the MXGP of Oman, before heading back to Europe for the MXGP of Italy, then followed by the MXGP of Portugal, Netherlands, Germany, Russia and Latvia. Then the series will head to Asia for two rounds in Indonesia, before returning to Czech Republic, Belgium, Sweden and Finland. Then towards the end of August, MXGP will return to Russia for the MXGP of Igora Drive, followed by Turkey, China, France, Spain and ending at the beautiful Patagonia Argentina.

And of course, after a year break, 2021 will also see the awaited return of the worldwide best off road event, the Monster Energy FIM Motocross of Nations, which will head to Imola, Italy on the 26th of September.