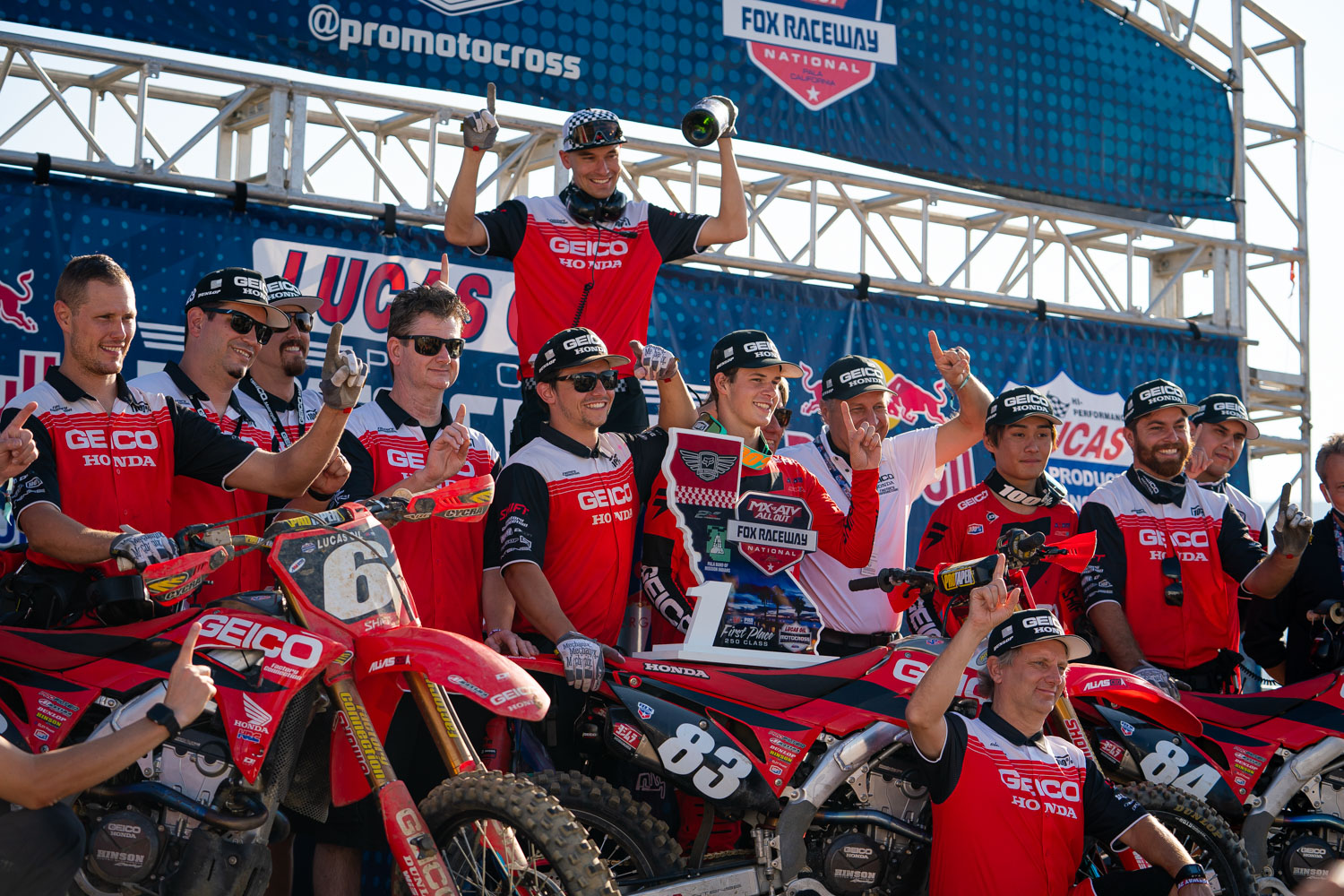 If you are the type of person that gets on Facebook and trashes GEICO for leaving the sport, maybe you should hop on their coattails and peace out too.

This is a hill I’m willing to die on.

I don’t think I have ever seen bandwagon participation in cancel culture more disappointing than the one happening across social media. Like the next guy, I am sad to see the legacy team that we know as GEICO Honda shut its doors. We’re talking about thirty to forty people that have lost their jobs, an astronomical number in our industry. While these workers found out last Saturday that the plug was officially pulled (more on that later), you don’t see them parading around with black flags to cancel the insurance company.

A business made a business decision. There is nothing personal about it. Jumping on a soapbox and trashing the business for leaving the sport is an absolute tone-deaf action. Why are certain individuals so triggered by this?

The especially-odd par of this kind of social grandstanding is that the average person complaining about the corporation taking exit tends to be red down the ticket. Out of one side of the mouth, they want free-market enterprise, deregulation, and opportunity for big business to boom. But the second it hits home, somewhere around the sixth degree of separation, they’re calling for a communal mutiny to cause a sinking ship.

These types are also the same to champion voting with your dollar, a modest and honorable act. Unfortunately, modesty and honor go unnoticed and hold no currency without virtue signaling. We have the luxury to keep from passing the buck in our industry, not outside of the boat, by switching to Progressive. Want to show GEICO that they will miss us? I know how to save 15-percent or more in 15 minutes or less, thanks to GL. And if you really, really want people to know you did the right thing, drop a screenshot of your savings on FB.

Imagine that you are the CEO of Business Company, Inc, a potential partner of a professional moto team. You’re intelligent and socially savvy, with a five-year S.A.F.E. (survey, adjust, forecast, execute) plan to be part of motocross, just like many brands propose on a dry erase board. During your investigation into the sport, you google “motocross message forum” and discover that hoards of individuals are ripping a company a new one for leaving the sport. You know that your company operates on five-year marketing campaign cycles and that in five years, you’ll likely leave the sport. This is standard practice for large companies; think about the “Butterfinger Holeshot” of the past.

On your cruise around the message forums and FB groups, you see this other major corp getting the Old Testament fire and brimstone with great vengeance and furious anger from participants in the sport. That file on your desk that has “your company name here Honda” will fall at maximum velocity into the recycling bin next to your desk. The GEICO Honda team reportedly needed $3 million for one-year title sponsorship. If there were leads, I’d bet some of them found these angry sentiments being strewn across the web (A major company would have an agency or PR firm do the work for them and report back their findings, and yeah, the assorted threads and posts that were named after the team would be easy AF to find. – Anton). Keep it to yourself.

I was on location “filming” for Fox’s Instagram story aver the weekend at the Fox Raceway National. I documented the weekend from an all-access perspective inside the track and behind the locked gates at the pit entrances. If you go to the @foxmoto IG, you can find the full highlight reel and you’ll see a clip of myself and the Fox pro team gear manager Hayden Hammond at the top of the GEICO Honda rig. What you won’t see is that when we walked inside, the outside of the pit was a ghost town. Not a soul could be found as we were walked up to the mirrored sliding glass doors and there was a vibe in the air that was not right. Hayden slid the doors open just as he had done a million times this season to take me upstairs and do a gear check, but this time a grimace faced man in a red shirt started to slam the door shut. After he saw it was Hayden and me, he let us pass. Entering the trailer, I looked left and see 20 team members crowded around for a talk. Hayden and I stepped up to the upper floor and awkwardly pretended we didn’t just see The Red Wedding unfold in front of us. It was a sad, sad sight to see, and the “you’re all terminated after this weekend” stench in the air is damn near palpable in the 15 seconds of footage while looking at the team’s gear.

Cheers to the 20-plus year run for the iconic satellite Honda team. 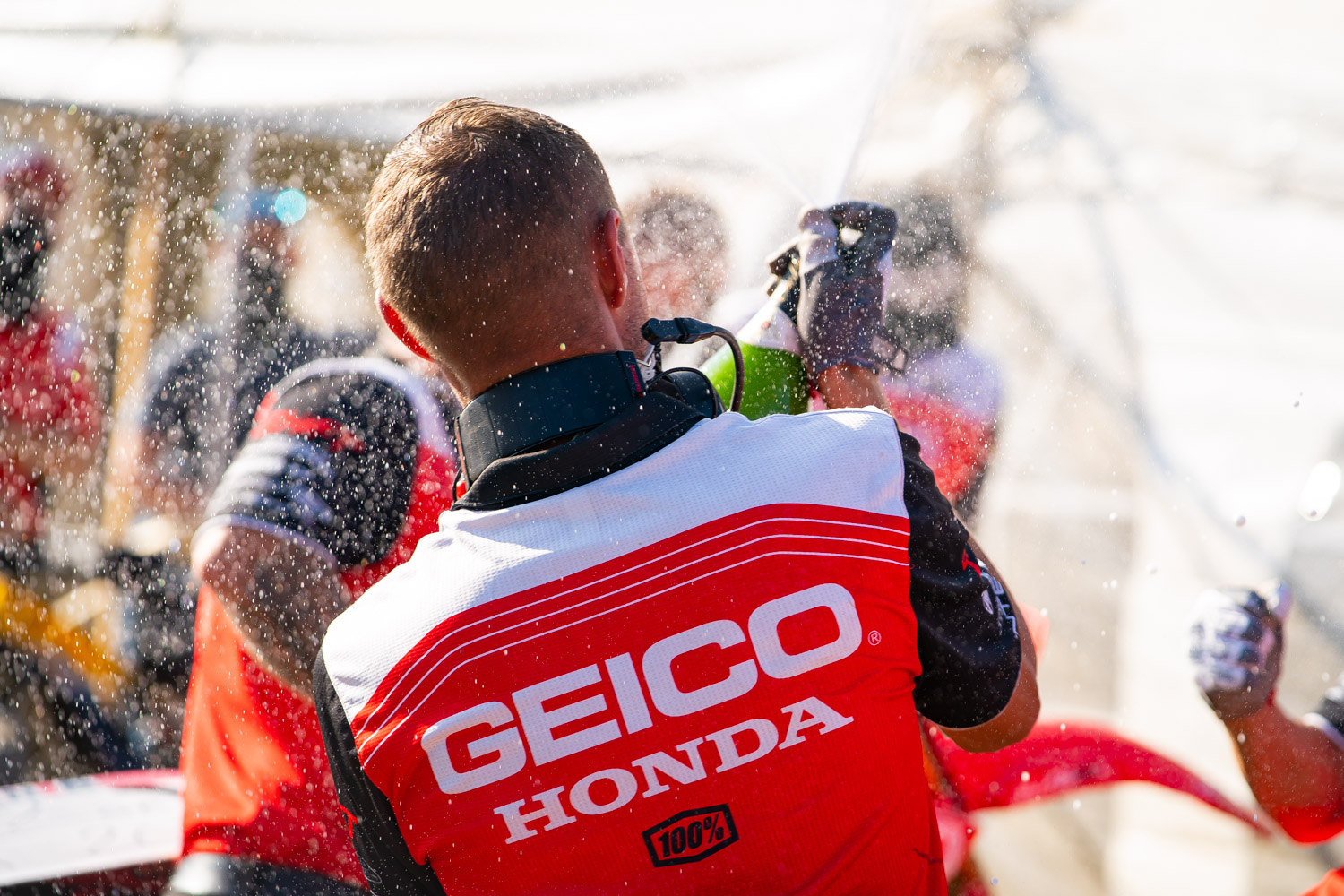